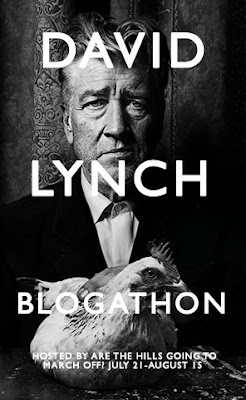 To me, David Lynch is the most singular, important filmmaker and artist working in America currently. With his oeuvre spanning uninhibited experimental oddities to mildly populist fare with mysterious, utterly unconventional elements, and with his unfathomable ability to gain a sort of unadulterated critical and creative freedom on nearly all of his projects, Lynch has come to nearly represent cinema as an art in the United States. And ironically, given his salient interest in Hollywood as an environment ("the air in Los Angeles..."), he has managed to continue a tradition of successful off-the-beaten-path filmmaking, variably expressing disinterest in the commercial efforts of The Machine.

Tragically, in this light, I have come to realize that I have seen nearly all of his films but have not written about them. It comes as quite a shock given the fact that his films have elicited perhaps more hardcore contemplation out of me than the films of any other living director. Therefore, from July 21st to August 15th, I have decided to activate a David Lynch Blogathon. I will be watching every one of his feature films sequentially, as well as taking into account some of the more unseen shorts. Of course, there is a small amount of his work that was difficult for me to obtain, so some have been left out, but I believe the pieces that I will explore owe a great deal to Lynch's sensibility in general. I have never participated in such a thorough and relentless investigation of one artist's career, so I am hoping that doing so will be a way to truly probe the mind of Lynch the artist, Lynch the entertainer, and Lynch the enigma. Below, I have listed the dates that I plan to write about each work, although the specific times of their publishing are subject to fluctuation over the course of their respective days. Also, anyone interested in joining in on the fun is encouraged to either leave feedback here on my blog, or even write about the films on your own blog. I'd gladly link to such articles.

I look forward to your ambitious series. Lynch left behind a few stinkers, notably Dune (though to be fair any director would have failed at Herbert's vision) and Wild at Heart (obtuse and pretentious). But I agree that his artistic integrity is impeccable. Blue Velvet and Mulholland Drive are masterpieces, easily making my top 40 films of all time. I need to revisit Lost Highway too -- it's been a while since I've seen it, and your blogathon has inspired me.

Thanks a lot Loren! I do agree with you on the fact that he has a couple of weak showings, but to me, a poor film can be just as indicative of a director at large as one of their masterpieces. Wild at Heart certainly is one of those head-scratchers, but I'll be sure to get into that much more when the time comes. I appreciate the interest; just let me know if you have written anything according to my schedule!

Great idea, Carson, I'm really looking forward to it. Lynch is one of my favorites too, and I'm interested to see what you have to say about him. I've posted the info at the Film Blog Calendar.