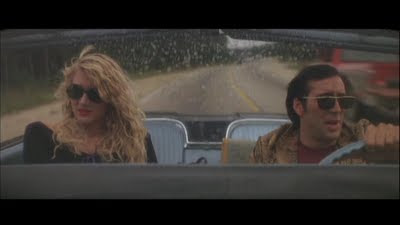 It has always been a mystery to me what was going through the minds of the jury at the 1990 Cannes Film Festival - an able one at that, with Sven Nykvist, Bernardo Bertolucci, and Fanny Ardant in the bunch - when they chose David Lynch's Wild at Heart as the Palme D'Or. As well as acting as another launching point in the flippant career of Nicolas Cage, the film toys with so many archetypes, references, and genres that it amounts to a scattered mess, loaded with shrill fragments and lacking any semblance of dramatic thrust. Lynch's love for cheesy, trailer-trash reworkings of vaguely 50's-esque milieus had hits its apogee when he made Wild at Heart, which is cushioned by the yokel-made The Cowboy and the Frenchman and his extensive Twin Peaks era. You can see some strands from these works laying loosely over the edges, but they are assembled in such a way that makes them uglier, soapier, and more clichéd.

Toothless hags, psychotic mothers pinned to their chairs, obese people wearing "Made in America" shirts, sausage venders who are pedophiles on the side: these are the types of people that you likely have no interest in meeting. These are also the kind of people that populate Sailor (Cage) and Lula's (Laura Dern) road trip in Wild at Heart. Out of desperation caused by Lula's mother's heated denial of her rebellious boyfriend Sailor, the fiery couple takes to the highway, constantly being swept away by their car radio, an endless repeat of deserted 50's bar rock. Sailor's interested in keeping his girl and his life, and Lula gives herself over completely to Sailor's gimmicky romance (Sailor frequently impresses her with his monklike devotion to his snakeskin jacket, his "symbol of individuality and personal freedom"). The central couple is the most tired attempt at symbolic archetype Lynch ever made; Sailor is a mix of James Dean and Elvis, and Lula straddles Dorothy from The Wizard of Oz and "Like a Prayer"-era Madonna. Neither of them have that effervescent air of mythic American characters though, or perhaps they have too much, because their blunt overacting and lack of subdued physical expression only makes them laughable. Of course, this could be read as Lynch's intention, to push the parameters of histrionics to a point where the film would reach the terrain of intertextual meta-critique. Nonetheless, Sailor and Lula's inability to shut up and simply act natural for a moment aggravates on a level high above the storyline.

It is hard to believe, but there is a literary source to Wild at Heart: Barry Gifford's novel of the same name. There is something to be said about Lynch's knack for stranding a work so distant from its novelistic origins, the result of which must have excited Gifford, for their collaboration continued on to Lost Highway. But Lynch's cinematic realization of Gifford's material here is uninspired; he seems to have less interest in the story than he does in taping on goofy metaphors and discomforting vignettes. Some of the bizarre characters, Bobby Peru (Willem Dafoe) specifically as a heinous, womanizing bandit that Sailor hooks up with, are right up there with the rest of Lynch's freaks, but their additions often feel meaningless and hollow, existing only to fulfill Lynch's desire for spastic narrative detours. The tacky allusions to Wizard of Oz are also fruitful, culminating in the grandly embarrassing finale of the film, but whether or not Sailor and Lula are journeying along the yellow brick road doesn't matter - the metaphor is totally arbitrary. Similarly, Lynch can't seem to let go of his characteristic fascination with fire as a dominant motif, but it too is stolid, incorporating itself as more of a fixation Lynch can't shake off rather than a fitting element. Admittedly, I have a hard time speaking this negatively about Lynch, but Wild at Heart struck me upon first viewing, and still to this day, as the nadir of his career.
Posted by Carson Lund at 7:48 PM

I agree with you completely. "Goofy metaphors" galore, and I still don't understand the Wizard of Oz imagery (other than Lynch's personal love affair with Oz). Maybe Lynch was just having fun with this film.

I think that's a fine way to put it: "just having fun". Often times, with great directors, such a mindset produces great work, but it's hard to deny the clumsiness of this film.