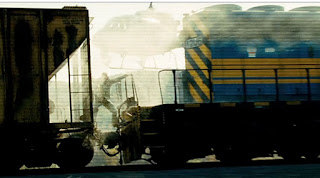 The Day He Arrives (2011): I don't feel comfortable writing at length about Hong Sang-soo's work yet, due both to my limited exposure to his films and also to the fact that I sense a strong understanding of his worldview can only adequately be gained after seeing a large chunk of his movies, if not his entire body of work. As of now, there's an entire code of language and a warped way of seeing things that I can only grasp superficially. That said, I have been thinking a lot about The Day He Arrives in the context of the monologue given by Richard Linklater at the start of Slacker: the existence(s) of Hong's characters splinter off into multiple possible directions – all of which are visualized in identically drab fashion (a surface homogeneity that probably accounts for the spatiotemporal confusion) – based off casual misunderstandings and fanciful mental projections. In other words, the introspective rumination that occurs during conversation is concretized into separate chapters of the narrative, an approach that becomes doubly fascinating through Hong's refusal to actually consistently depict an inner life.

Make Way for Tomorrow (1937): The final half hour of this movie is perfect. Never before and never since, to my understanding at least, has the love of an elderly couple been conveyed with such compassion, purity of vision, and such a wonderful lack of condescension. Beulah Bondi's bashful glance at the camera in a NYC ballroom as she's about to kiss her longtime husband (played by Victor Moore) on what is potentially their final night together crystallizes the pointed balancing act of pathos and irreverence that characterizes Leo McCarey's approach. Unfortunately, I'm not as keen as others on the rest of the film, a scenario in which the couple's self-involved urban children are forced to reckon with their parents' newfound homelessness that occasionally veers into a preachy territory that is quite atypical of McCarey's work. The director's greatest sensitivity is saved for Bondi's self-proclaimed "favorite son" George (Thomas Mitchell), but beyond this portrayal the film offers far too many instances where the message of a scene is all too clear.

Keyhole (2011): Cinema needs a little space carved out for a filmmaker Guy Maddin who excavates beyond-obscure crevices of film history and repurposes them to his own end, in the process revealing how these utterly forgotten moving-image strands are part of a cinephiliac subconscious that continues to inflect the alternative mainstream and the avant-garde. Take Keyhole, a film that has a palpably musty stench of unimaginative detective miniseries only watched by those on the late-shift in some ice-cold Canadian suburb in 1941, yet also seems to echo the mood of early David Lynch and the Freudian narrative logic of Un Chien Andalou. Maddin understands the eternal magnetism of cinematic images and stories more than almost any filmmaker working today, the way they unspool wildly in our brains, losing specificity and everything but sensory impact – this idea was practically the thesis of My Winnipeg. If that film rendered this truth direct and visible, Keyhole returns to Maddin's habit of coding it impulsively into the DNA of a film; like Brand Upon the Brain, the film often feels like little more than an attempt to tell an absurd noirish tale through Maddin's fogged vision. What emerges is simultaneously wholly original and vaguely, mysteriously familiar.

Unstoppable (2010): Disclaimer: I've been slow to catch up with Tony Scott's work after his recent suicide-cum-critical-reappraisal, so my thoughts on these films are anything but fleshed out. My exposure to his body of work is pretty scattered; I saw Man on Fire, Domino, and True Romance when I was much younger and haven't felt the urge to revisit them, whereas the only thing preventing me from tackling his alleged magnum opus Deja Vu is a feeling that in order to get the most out of it I need to bone up on the earlier stuff – classic auteurist assumptions, really. As for Unstoppable, I'd only caught bits and pieces of it on television before finally watching it start to finish recently, and the responses I fleetingly assumed during those earlier fragments collected into something of a stance this time around on this alternately admirable and frustrating thriller: the movie's interesting aspects – its kinetically gorgeous visuals, its barrage of narrative perspectives, its geographic specificity, its vivid sense of being on the precipice of life and death – are routinely complicated by surface-oriented stupidity. For instance, there is the film's socioeconomic stereotyping, wherein each class archetype is addressed through its own blunt symbology (the Hooter's girls are treated to prurient booty shots, the mustachioed, bar-dwelling railway employee is signaled by clichéd country music, the Soulless Corporate Head spends the entire movie in an anonymous grey urban suite), or the flagrantly unsubtle methods of aligning the spectator's responses to the central crisis with those of the third-party onlookers. Still, there's a lot going on here that bears repeat consideration, something I'll hopefully get to after further examination of Scott's cinema.

Faust (1926): Out of a classic German legend consisting of angels, devils, mystical pacts that compromise souls, and other sensational details, F.W. Murnau fashioned a down-to-earth romance that is just as much about humankind as a more decidedly unremarkable film like Sunrise. Funneling the narrative into a flawed romance between the hasty but good-hearted protagonist (Gösta Ekman) and a beautiful commoner (Camilla Horn), casting the Catholic orthodoxy as a morally bankrupt evil, and privileging images of small communities, simple acts of kindness, and humbling forces of nature over the sensational hysteria of the plot are just a small sampling of the ways in which Murnau bends this ancient parable to his desired ends. That said, Faust is still rousing spectacle as far as the twenties are concerned; Murnau renders the iconic and the mythic as eloquently as the human and the mundane, most memorably in a stunning special-effects shot of a larger-than-life demon shadow engulfing a wintry German town and in a final stratospheric battle between the Angel and the Devil. Unfortunately, the otherwise functional theatrical setting in which I witnessed the film (live electronic keyboard score, big screen, respectful audience) was hampered by the irreconcilable flaw in the fact that the movie was presented on a DVD with conspicuous interlacing.

China Gate (1957): Following an ostensibly documentarian but patently ridiculous opening informational montage on Communist and French intervention in Vietnam with a moody ballad of the titular song crooned by Nat "King" Cole set against elaborately production-designed war wreckage is about as sturdy a method as any for wiping away any semblance of narrative authenticity and authority on the Vietnam War, and director Sam Fuller continues to apply irreverent and often times tasteless elements to a strife-torn backdrop throughout China Gate. For much of the film's middle section, the Vietnamese jungle is nearly mistaken for a steamy bathhouse, with petty narratives of lust, betrayal, and selfishness strewn around. Big Statements are kept to a minimum here, but the film's overblown assumptions (that every Communist is a crude womanizer, mindlessly lethal, and essentially synonymous with Stalin, that all children are innocent and pure, etc.) still supply laughs, and it becomes difficult to disentangle the film's perceived racial tolerance and such broad generalizations. Fuller's always good for impressions of brawny stylistic heft though; every gunshot fired rings deadly, momentarily trivializing the plot's goofiness. And one would be hard-pressed to find a more expressive airplane/helicopter getaway sequence than the muted, pared-down, harrowing one that concludes this film.

Meshes of the Afternoon (1943): Revisiting this on a 16mm print confirmed what a genius piece of filmmaking it is, and furthermore how ahead of its time it was aesthetically, narratively, and politically. Deren's subtle and hypnotic modulation between slow-motion and real-time anticipates Tarkovsky, her rabbit-hole narrative – complete with recurring objects and motifs – is a clear template for Lynch, and her approach to the image of femininity espouses a critique of Hollywood objectification that has inflected a number of socially-conscious filmmakers too great to accurately summarize in a sentence. What really stuck with me this time around was the film's entrancing score, a buzzing, clamoring drone prophetic of Toru Takemitsu's work for Hiroshi Teshigahara and also reminiscent of ritualistic tribal music, speaking to an enduring interest in the topic that eventually led Deren to the villages of Haiti.

Go! Go! Go! (1962-64): A frenetic single-frame diary of Maria Menken's daily NYC commute to her desk job and throughout the city that achieves levels of whimsy, poignancy, and darkness that go well beyond mere observation. This is a film seemingly comprised of impulsive gestures with the camera that nonetheless captures impressions of urban truth: bodies moving rapidly to and fro, boats docking and setting off in a harbor photographed in such a way that they resemble toy ships being manipulated by a child, people relaxing on a beachfront surrounded by looming buildings, and humorous asides distilling and poking fun at constructions of gender norms, such as an amusing bit at a muscle show. Menken's in-camera editing unfolds with joyful abandon, passing over large swaths of time to get at key aspects of the modern city. Looked at this way, Go! Go! Go! suggests the mechanics of mental recollection, the strange feeling of cycling through a day's, week's, or month's worth of events in one's head.

Geography of the Body (1946): If Menken herself is absent from Go! Go! Go!, she's very much present, albeit heavily segmented and abstracted, in her husband Willard Maas' film Geography of the Body, which, superficially speaking, takes her body (and an unidentified male's) as its subjects. Visualizing the "mysterious caverns" referenced by surrealist narrator-poet George Barker on the soundtrack(a text related in Barker's droll British accent, suggestive of a particularly flamboyant Kubrickian monologue), Maas shoots these figures in tight close-ups, focusing on neglected portions of the human body, discovering textured landscapes among the flesh. His takes are relatively long, allowing the eye to search for context among what are decidedly decontextualized images. Often times the shots are fairly legible (it's hard to mistake an ear or a hairline for anything but), though Maas also trains his camera on pulsating muscles, obtuse angles, and murky black holes that are very difficult to get a coherent grasp of. An avant-garde hit in its day for obvious reasons, Geography of the Body is the notable for the way it continues to inspire powerful dislocation in the face of such a seemingly intimate subject as the human body.