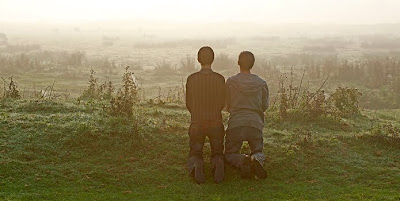 Viewed under proper circumstances – 35mm projection, expansive 2:35:1 aspect ratio unhindered by cropping, hushed theater without booming action movie screening next door; in a word, a devotional setting – Bruno Dumont's Outside Satan bears down on you. Alternating between statuesque close-ups of faces against skies and rapturous deep-focus views of the rural dunes of Nowhere, France, the film essentially presents a series of richly detailed landscapes to meditate upon, but this desire for contemplation is complicated throughout by a vaguely sinister energy. At any given moment, nature seems capable of assuming either a rejuvenating or actively violent role; so too does the screen itself, its physicality occasionally threatening to burst outward at the viewer. Of the many contemporary practitioners of so-called "slow cinema" (a trend that's too diffuse and noncommittal to be called a genre), Dumont is one of the least likely to allow for spontaneity. With his subtly micromanaged mise-en-scène, he summons a compositional intensity that lends minuscule gestures – a whistle through fingers, a dog's bark, a sudden bodily movement – an unsettling charge. Outside Satan takes full advantage of this latent unpredictability, thus finding a stylistic match for its willfully impenetrable protagonist.

Both Outside Satan and Dumont's preceding film, Hadewijch, deal with modern figures of intense religious devotion (overt in the latter, implied in the former) driven to acts of destructiveness. In this case, Dumont centers his attention on a stoic, misshapen drifter (David Dewaele) who behaves as some kind of vessel for the alternately satanic and saintly energy flows of a dreary seaside village. Under his wing is a punkish girl with a pixie cut (Alexandra Lemâtre) who lends him bread daily (the first of the film's several Christian allusions to emerge) and follows him as he roams the windy outskirts of the town. Occasionally, they face the vast landscape before them and kneel down into prayer position. They barely speak, and when they do it's a banal collection of curt sentences suggesting the barest skeleton of a relationship marked by suppressed emotions, unremarked-upon individual traumas, and co-dependency. Early on, there is an indication of the peculiar philosophical space that binds them together: the girl follows the man to the back of a rusty shed, they wait with a rifle for a man to emerge from a barn nearby, Dewaele shoots him, and the two of them stand there motionless, solemnly directing their gazes towards the ground, flickering no visible signs of either emotional guilt or a desire to flee the scene.

The casting of Dewaele and Lemâtre, two of the most inherently expressive faces I've witnessed in some time, is essential to the power of these blank slate moments. Dewaele is a strange, intimidatingly unattractive man, like a street rat manifested as a human. His face – framed by a combed mop of wiry dirty blonde hair and punctuated by an uneven unibrow, patchy facial hair, a tight-lipped scowl, and the occasional scar or cut that suggestively comes and goes – rarely interrupts its default expression: a hard-to-read concoction of smug indifference, gentle humility, and barely veiled bloodlust. This face belongs to a stiff, awkward body adorned with wrongly fitting clothes that sometimes create the illusion that bones are jutting out from beneath his skin in random places. Beside him is Lemâtre, her features softer and more recognizably human, her physiognomy more reptilian than rodent-like, and her squinted eyes hinting at years of personal turmoil only obliquely thrown into relief by the thinly outlined narrative detail regarding her apparently abusive father, cryptically identified as the victim of the aforementioned rifle shot.

The cutthroat moral logic guiding this act (the father pays for his wrongs) continues to mark some of the behavior of Dewaele's character. It is not long before he commits another murder, this time bludgeoning the head of a man who has continually made unsuccessful romantic and erotic advances at Lemâtre's character. Later, he has a simultaneously sexual and violent encounter with a female passerby that ostensibly ends with some kind of metaphysical death and rebirth. What links these three victims is a sense of impurity or wrongdoing: physical abuse in the first instance, tactlessness and emotional disregard in the second, and flippant self-prostitution in the last. Dumont is, on the one hand, presenting a character defined by his communion with both the natural world and a higher power who appears to have some sort of agenda to rid the village of any violating behavior. But at the same time, this man is prone to mistakes (he kills a deer when trying to shoot a bird), to perceived discontinuities between thought and action (he enjoys sex with the passerby before punishing her), and to radical shifts in alleged intent to the point that he appears to be shifting at will between binaries of good and evil, self-interest and selflessness, omniscient control and chance.

Put in grander, flashier terms – and the terms popularly bandied about by those trying to make sense of this aggressively provocative work – the man vacillates between Christ and the Devil. But it may be less accurate to say he shifts between these two poles than it is to say he embodies something of both at all times. Brief appearances of iPod headphones and beer cans tell us Outside Satan (otherwise decidedly agrarian) is set in the modern world, which may lead one to believe Dumont is crafting a parable about the place of consuming religious faith in an increasingly anti-spiritual environment. If so, the question that emerges pertains not to whether Dumont condemns or praises the spiritual pursuit (it's fairly clear that it's not so simple), but to the extent to which Dewaele's character's actions are his own or if they are somehow dictated by the movements of the community he exists within. One of the film's pivotal narrative developments involves the possessed young daughter of a widow. The woman routinely invites the man over to her home to monitor her daughter's physical and mental state, and one day he lunges on top of her and bellows into her foaming mouth (an action he will later perform on the female passerby). Upon leaving, the mother graciously thanks him for supposedly saving her daughter.

There are negative repercussions to this shocking quasi-pedophiliac exorcism, though, not in spite of but possibly because of the fact that it's perceived by the woman as a virtuous act (Dumont's approach to the scene, of course, is characteristically aloof). Shortly thereafter, Lemâtre's character dies enigmatically (and, it turns out, temporarily) when she creeps into a rustling darkness in a small forested patch. If the previous moment flirted with The Exorcist, this scene takes even further an undertone of pulpy horror that the film knowingly plays with throughout. Dumont's formidable command of screen space, editing tempo, and atmospheric soundscapes is such that every shot feels as if it's on the precipice of a dangerous outburst that never arrives. Here, the simple cutting rhythm between Lemâtre's apprehensive expression as she moves slowly forward and a static medium shot of a dark alcove in the woods – coupled with the eerie silence following a soft cracking in the darkness – creates unbearable tension. As with so many of the film's suggestive build-ups, however, Dumont dodges the payoff in favor of a classic Bressonian ellipsis that places the emphasis on the result of the act rather than the act: an unassuming fade to black, followed by a tight, abstracted close-up of Lemâtre's lower legs, dirtied by leaves and mud. By never definitively assigning a guilty party to her death (cops do point the finger at an auxiliary character who may or may not be of significance, but one gets the sense that justice has not been served), the film leaves open the possibility that the culprit may not be human at all. Have the cosmos somehow conspired against Dewaele's character, rewarding his "good deed" with a competing tilt of the moral universe?

Outside Satan doesn't have a plot so much as a succession of these mysterious red herrings. In fact, there's an entirely separate narrative thread involving a group of cops investigating the string of criminal incidents that's so opaque it barely even registers as anything more than a collection of wide shots of men in uniform getting in and out of cars, asking witnesses unheard questions, and emerging from crime scenes (strangely, they seem oblivious to the coincidence that Dewaele is always roaming on the periphery). Such is the effect of Dumont's ascetic approach here, which leaves a not-uncomplicated narrative bubbling beneath a sedate surface of spacious, inscrutable images and nondescript ambient sounds. But this sense of calm is only a mask for much darker, more unstable undercurrents, all of which momentarily erupt to the surface when the vast landscape incomprehensibly sets aflame in the final third of the movie, a large-scale metaphor whose extinguishment soon after it arrives is further proof of the prophetic shape-shifting of Dewaele's character. This is a man with destructive and rejuvenating powers, and the scariest quality about him is the suspicion – sustained for the film's entirety – that he's not the one responsible for how he uses them.