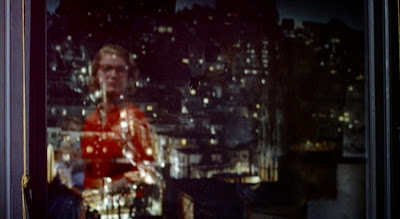 Vertigo (1958): I still largely stand by this mediocre review I wrote two years ago, but there's one new detail that I noted and want to elaborate upon: every time Scottie returns to Midge’s apartment, the visual strategy differs in relation to Scottie’s systematic termination of her from his life. The first time Hitchcock shows the two together—the second scene of the movie, before Scottie’s “met” Madeleine—the staging and cutting is fairly conventional. They’re looking at one another, engaging with one another, and the shot-reverse-shot setups reflect this. When Scottie returns to Midge’s apartment after taking on the Madeleine case, he idles in the entryway before shifting over to the kitchen, a room away from Midge. Hitchcock shoots strictly in wide shots here, only showing the two in the same frame at the beginning of the scene, in which a wall separating the living room and entryway blocks the two from seeing one another. Their next encounter is even less harmonious: Midge spends half the time washing her hands in the kitchen sink, back to the camera, while Scottie sits on the couch, his mind elsewhere. Here, Hitchcock shoots at obscure angles (Stewart’s single is taken from the cushion of the sofa he’s sitting on, making him look awkwardly large), deliberately complicating the eye lines so that it’s unclear where the two stand in relation to one another. The fourth major Midge scene ends with a devastating long shot of her walking down a sterile hospital hallway away from the camera. Then she’s gone from the movie, and there’s still 30 minutes left. She gets further and further from Scottie until she disappears, making it clear he’s lost his grasp on reality.

What is Cinema? (2013): This is not. It egregiously simplifies and/or outright fudges every theoretical position it tries to summarize; it abandons lines of thought just as soon as they emerge (Workman’s considerations of digital filmmaking, for instance, amount to…it exists); it jumps arbitrarily through ideas, time periods, and frames of reference; it ignores entire bodies of work, national cinemas, and eras; it surveys vast cinematic landscapes one moment and then awkwardly scrutinizes individual filmmakers the next, many of whom have no business being in the spotlight (Michael Moore?); it never utters “Muybridge,” “Lumière,” “Griffith,” “Sternberg,” “Mizoguchi,” “Hawks,” “Cassavetes,” “Brakhage,” “Ophuls,” “Rohmer,” “Kubrick,” “Hou,” or “Tscherkassky,” among other glaring omissions of watershed figures; it uses Comic Sans at one point for onscreen titling; it annotates some film clips but inexplicably leaves others unmarked; it puts emphasis on Bresson’s declaration of cinema as a harmony of sound, image, movement, and light (paraphrased), but then commits the crime of pouring saccharine strings all over a strictly diegetic wallet theft scene in Pickpocket, seemingly ignorant of the French director’s impassioned rejection of film scores; it features some keyboard-mashing bro crooning “satirically” about Godard the Intellectual over footage from Weekend; it also features something like the Now That’s What I Call Music rave jam “I Love Movies”; and it completely buries Jonas Mekas’ lovably fragile voice with said track. In short, the movie’s kind of a joke. Knowing that someone will watch this, feel as though they saved thousands on film school and go home feeling good about it is maddening.

The Naked Gun 2½: The Smell of Fear (1991): I’ve always been fascinated by David Zucker’s comedies—before, of course, 2003, at which point they became almost the worst things in the world—because they’re so consciously not about what they’re about on the surface, the spoof movie being one of few (if not the only) Hollywood genre(s) in which plot and character are of little to no consequence. What matters instead are the details, the stuff that occurs on the periphery of the action or between the words: the way a cut to a new angle reveals some hitherto unseen visual element; a close-up held just long enough on an empty expression that it disrupts the conversational flow and becomes a gag in itself; a misdirected eye line; a ludicrous sign in the back of a shot; a hard, throat-clearing cut out of a self-consciously syrupy sex scene; the way in which an elongated 180-degree scan of the eyes by Leslie Nielsen can help sell a bad joke (the “boy scout” bit, for instance). Naked Gun 2½ doesn’t have the near-perfect slapstick timing of the original, but it does show Zucker trying out new visual strategies, playing with more sophisticated deep-focus cinematography and complicated camera movements to over-stuff the frame with detail. Foreground and background are in constant competition for the viewer’s attention, making it difficult to catch every “joke” contained in each shot in a single sitting. Mind you, these jokes aren’t always very good or very clever—for instance, there are no less than five boob jokes, one of which literally stops the film dead in its tracks for a googly-eyed five seconds—but Zucker ensures that they’re at least there, knowing full well that his unmitigated commitment to joke overload is a joke in itself. 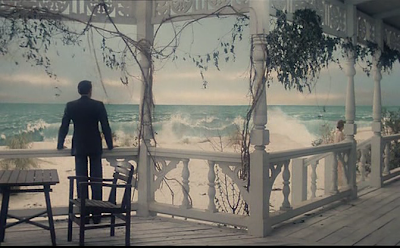 Lost Horizon (1937): A group of American diplomats crash lands in an imposing tundra and quickly gets saved by a cluster of wandering spiritualists who usher them back to their Marienbad-esque abode, a temporally suspended, climate-proof zone known as Shangri-La that is cut off from any outside connection. Here, they are to be schooled on the good nature of Christian faith from some ageless, proto-Yoda in a tall throne; some are indoctrinated and never want to leave, while others remain skeptical. Capra typically worked in the comedy genre, yet none of this is a joke. Lost Horizon exists in the same historical vacuum that sucked up other exorbitantly priced auteur curiosities like Duel in the Sun, Popeye, and Dune, only it’s more self-evidently awful than any of those weirdly likable diversions. All of this is quite a shame, as the film begins with one of the more exhilarating stretches of experiential filmmaking in Capra’s career, a sustained episode of airborne anxiety uncharacteristically attuned to atmospheric details: the lull of nervous waiting, fast breaths materializing in cold air, ice gathering on tiny windows, etc. The sequence would seem to be setting the stage for a Hawksian ensemble piece, or perhaps an embryonic version of The Grey, but with one pan to the fur-covered saviors Capra spills all of the film’s tension, trading the real for the surreal, the specific for the general, and the physical for the ethereal. The modern world is corrupt, Man is corrupted, and His inherent goodness must be reclaimed: While this conservative worldview finds itself, intentionally or not, under heavy scrutiny within the sardonic plotting of Capra’s best work, here in LaLa Land it balloons into unmitigated schmaltz scrawled boldly across the film’s screenplay. Frightful special effects usher the protagonist to his doom upon his involuntary last-minute exodus from Shangri-La, signifying Capra’s damningly silly final sentiment: this creepy hermetic bubble is apparently a utopia worth striving for.

Providence (1977): It’s never easy to tell when a Resnais film is going to end. Three times in the past few days of Resnais-binging I’ve expected a cut to end credits (the sublimely irreverent “Fin” fake-out in Wild Grass and two elegiac crane pull-aways in Mon Oncle D’Amerique and Providence, respectively) only to find a significant chunk of reel left around the corner. On one delightful level he’s simply preying on audience expectations of formal indications of conclusion; on another level he’s concocting narrative layers that extend ever-outward, so that when one “inner” story ends the other is still petering out. What we see is always remembered, imagined, or constructed, so there must be some frame outside the frame. Trouble is there’s a clear hierarchy in Providence; without the “outer” story—an old lonely writer drinking himself to oblivion and fabricating ideas about his estranged children in some Addams Family-esque mansion—the film is just a hollow shell of macho bourgeois beefs played out against painted backdrops. It’s occasionally funny and sometimes gut-punching but mostly just tediously artificial (not surprising, as writing isn’t usually very good when executed in the depths of self-pity). When things rip into clarity in the final act, the emotional stakes of the film are bruising—that Providence was Resnais’ only English-language feature is amusing; how many American movies of the time can claim to undercut their jokiness with such despair?—but this belated act of recontextualization makes for a frustrating first watch. I hold out hope for a future encounter, but, when placed aside his structurally likeminded but far more seductively shot follow-up, the surfaces here (one exterior scene uses daylight and tungsten stocks interchangeably with predictably horrifying results) won’t be calling me back.

Life Itself (2014): Firmly in line with my own ambivalent perspective on both Siskel and Ebert and Ebert’s writing: entertaining and informative, punctuated with wit and no-frills rhythm, but prone to simplification, exaggerated statements, and not altogether sturdy when held up to close scrutiny. A lot of it comes down to the fact that Steve James probably just loves his subject too much and is unwilling to entertain much degree of friction or competing opinion (Rosenbaum, for instance, is noticeably not starry-eyed but chooses his words carefully and in the end doesn’t get much screen time). The Kael/Sarris overview—seemingly designed to fill the viewer in on all they need to know about the American film criticism landscape circa appx. 1968-1990—feels a tad too simplistic in filing them as the highbrow thinkers to Ebert’s populist performer. Then there’s the too-little, too-late mention of its subject’s moral engagement with cinema, which briefly uses Blue Velvet as a bull’s eye and ultimately further simplifies what was already a debatable argument on Ebert’s part. Life Itself stops short of outright deification—lively early scenes summarizing Ebert’s folksy Chicagoan persona, which included heavy drinking and overt womanizing, color in a compromised individual (though at the same time such transgressions never stopped Fellini on his path to mythic status)—but it preaches to the choir so much about the Midwestern critic as a career-maker/saver, a jovial public figure, and a consummately loyal professional that its primary goal remains driving Ebert’s historic legacy one last time into the collective consciousness. More damningly, it does all this a package that grows wearyingly conventional around the 30-minute mark. Note: I realize that the film’s hospital footage and especially its intimate final act—in which Ebert’s professed desire for openness regarding disclosure of his medical ailments reaches its morbid end point—function as a kind of built-in counterargument to my representational reservations here (it’s an UNFLINCHING HUMAN PORTRAIT, DAMMIT!), but this dramatic gesture of heroic humility felt slickly manufactured to me, another way for James to work in a point about Ebert’s upstanding character.