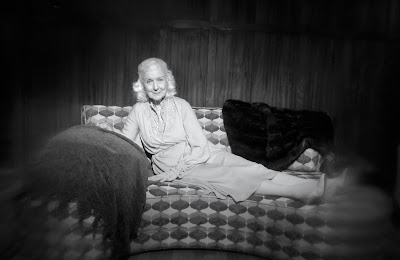 Found footage, super 8mm, and shoddy digital video collide in Guy Maddin's My Winnipeg just as much as fact and fiction do. In a conventional sense, this is a documentary, one made for Canada's Documentary Channel at that, but Maddin, as usual, has little to no interest in a straightforward presentation of factual information. Narrated like esoteric beat-poetry throughout by Maddin himself, the film's title is on-the-nose: this is not necessarily the real Winnipeg, but rather his Winnipeg. Maddin, one of cinema's greatest living mythologists, has created a potent dream space that collects the mood of Manitoba's cold, dreary capital and refracts it through his singular aesthetic, one that filters autobiographical information through a dense collage of lurid 1940's Hollywood melodrama, the handmade spectacle of Georges Méliès, the formal experimentation of Stan Brakhage, the cryptic associative strategies of Soviet Montage, and just occasionally, the familiar practices of low-budget documentary filmmaking. His films are funhouses of cinephiliac associations, inviting an active engagement with film history along the way, but miraculously, in spite of all the pastiche, Maddin emerges with his own individual style that is so steeped in the hyperspeed sprawl afforded to film production by modern technology as well as the giddy postmodernism that inevitably results from a century's worth of images that it could only exist today.

A tip-off to Maddin's tongue-in-cheek, self-fictionalizing attitude arrives early when we see that he does not cast himself in the part of himself - a man sleeping his way through an endless cross-city train ride - but rather Darcy Fehr, a recurring actor in Maddin's corpus. Furthermore, his mother comes in the form of Ann Savage, a burnt-out actress who achieved fleeting cult status in a variety of Hollywood B-films in the 40's and 50's, hinting at Maddin's interest in letting pop culture overlap with personal history. No doubt indebted to her experience in the kinds of stuffy melodramas Maddin is consciously reworking, Savage brings a terrifically authentic presence to the film, playing out Maddin's outsized Oedipal Complex perfectly in grand, often times hokey gestures and menacing facial expressions, which frequently dominate the screen in the film's many shambolic superimpositions. In fact, Maddin frames the whole city of Winnipeg as an emblem of maternal possession. One of the film's many repeated inside-jokes is a succession of cartographic images of Winnipeg's various bodies of water, within which Maddin uncovers perverse visual analogies to his mother's body parts. (The "forks beneath the forks", or the merging of two major rivers, aligns with a crotch, and the "lap", the pool where the rivers dump, is self-explanatory). It's a bizarre turn of comparison and allegorical guiding force, but it effectively communicates the fact that Maddin's obsessive urge to escape Winnipeg is also, and perhaps more fundamentally, an urge to escape the clutches of his mother.

His logical solution to escape? Well, he decides it best to "film his way out" by re-staging ordinary domestic scenes from his youth with local actors and actresses, which ultimately end up looking like a cross between the hysterical "Ledge-Man" sitcoms Maddin claims his mother watched religiously in his youth and the disturbingly off-kilter dinner scenes in Eraserhead. Maddin's approach is hilariously self-referential in these artificial family mini-dramas, as his voice-over comments explicitly on what is happening and critiques the deliberately hammy performances of the amateur actors, giving the sense that the scenes are being directed as they unfold. The long, mundane two-shots and flat lighting absolutely nails the aesthetic of cheaply-made 50's sitcoms, and the scenarios - Guy's sister is chastised and picked apart by her mother after coming home too late from a date, the children force their mother to get up and make pancakes by scaring her with a bird - are so convincingly goofy that Maddin's affection for campy home entertainment is made palpable. Through staged reenactions of his own past, Maddin is being open about his effort to use the filmic medium as a way of exorcising past demons, even if those demons are more laughable and eccentric than they are unsettling. 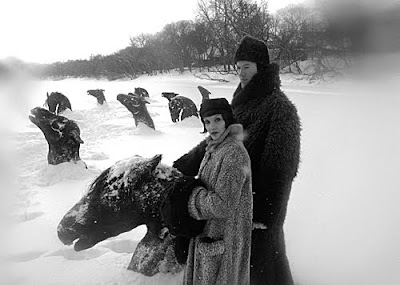 Political and social histories of Winnipeg are interwoven with the personal musings, but even in his handling of potentially drier material Maddin is no less whimsical. The film is almost anti realism in its approach, always creating a larger-than-life story out of raw information like historical data, geographical and architectural sites, and wayward Winnipegian rituals and festivities. In one of the film's most thrilling passages, Maddin documents his alleged birth and impassioned upbringing in the grandstands of the Winnipeg hockey stadium, which the film proves through crummy prosumer camera footage to have been recently demolished. Maddin critiques the modernizing behavior of his local government not with cold polemics but with unapologetically childish pathos; a sequence introducing each and every one of the Winnipeg Maroons players that Maddin looked up to as a child is playfully staged as a classic sports broadcast, with each washed-up, near-geriatric athlete skating into position in front of the camera as Maddin, with the intonation of a sportscaster, announces their name. The film's charting of the illicit back roads that are used only by citizens and not by public transport becomes a minimalistic exercise in road hypnosis, with Maddin's hazy, snowy camera sprawling relentlessly down the dark and narrow shoots as if placed on the hood of a car. And of course actual occurrences transform into surrealistic nightmares: an ode to the local pool becomes a trip back into the recesses of Maddin's pre-pubescent mind when his sexually curious peers made a simple swimming excursion into a "Dance of the Hairless Boners", and the tragedy of the racetrack fire, which left a great number of stampeding horses frozen beneath acres of snow, provides the film's most haunting images.

Historically, My Winnipeg may be the inaugural (if not one among a very small handful of) instance[s] in which a pure mood piece disguises itself as a documentary, and vice versa. Retrospectively, the film is more about layers of snow and darkness - literalized in the many kaleidoscopic black and white collages in the film - than it is about anything else, and in its own unique way crystallizes a feeling of being in Winnipeg without actually being there. But Maddin's vision is never excessively dour or overtly self-involved; it's joyously self-deprecating, and universal in a way that manages to loosely connect all the manic eccentricities to concrete stages in the development of a modern human being - the obsessions, the couch-ridden over-saturation in media, the sexual awakenings, the various releases from parental figures, and most importantly, the feverish connection to one's hometown. My Winnipeg is an emphatic argument in the latter half of the nature vs. nurture debate, suggesting that the imprint of one's local experience becomes hardwired in a complex manner, revealing itself deeply in the pains and creations of an individual.
Posted by Carson Lund at 4:25 PM