As the Eraserhead DVD turns on, a curious screen entitled "TV CALIBRATION PAGE" presents itself before we can even get to the menu. It includes a set of directions on how to properly set both the brightness and the contrast on the television set, and also strongly advises the viewer to take all feasible measures to darken the room of viewing as much as possible. This small but substantive gesture alone does something to prove why David Lynch is, in my own words, "the most singular, important filmmaker and artist working in America currently". It is this act of insistence on Lynch's part to bring something to the film before it even begins, to discard any ideas one may have of using Eraserhead as just a "Friday Night Movie", and more like a cinematic experience that takes faith and dedication on the viewer's part, that sets Lynch apart from the crowd. He believes so much in the potency of cinema, its unique ability to offer up a "dreamworld", that he will go this far to insure that the film is being screened in its most ideal format. Essentially, it is being seen in the manner of its truest origins: the editing table.

Eraserhead is the first David Lynch film I ever saw, and to this day it remains on my short, exalted list of great feature debuts in cinema. Taking place in a seedy Philadelphia industrial town, it documents the life of Henry (Jack Nance), an apprehensive printer living in a ramshackle apartment room seething with mangy plant material, dirt, and all matters of unidentifiable detritus. On his nightstand is a pile of this very rubbish, topped with a puny, leafless tree. Henry's days consist of nothing more than trudging in and around the smoky, defunct industrial buildings, stepping in puddles, opening up his cuckoo clock, and, in subdued pleas of desperation, sprawling out on his bed and staring into his radiator. One night he is invited to his girlfriend's house, ominously named Mary X, to have dinner with her and her parents. Mrs. X confronts him about his supposed intercourse with Mary, and follows by informing him of the premature baby waiting to be picked up from the hospital. Next, Lynch brings us back to Henry's apartment, where Mary tends to a grotesque infant lying on a desk, something like the mutated cousin of Spielberg's E.T. The baby whines incessantly, Mary and Henry fight over who takes care of it, the two lie in bed, restless and loveless, and eventually, in a fit of exhaustion, Mary becomes fed up with it, leaving Henry to his own devices.

This is, for the most part, the extent of what happens on the surface of Eraserhead, but it comes far from doing a bang-up job of describing the film as a whole. The remainder of the film is padded with nightmarish interludes of Henry's illusions and dreams, and to anyone who is mildly familiar with Lynch's work, it should be obvious that this is where the real magic lies, and also where Lynch gives the greatest emphasis. Henry is an extremely anxious character living in a hell from which he sees no way out (the brick wall which becomes his view of outdoors does little to help), so he longs for escapism. Granted, his escapes from reality are marred by his own wariness, thus they are menacing. Inside his radiator exists a miniature theater that is home to a singing and dancing woman who is by turns angelic (she is bathed in bright light) and demonic (her bulbous cheeks are scarily immobile as she taunts Henry by stepping on the sperm-like objects that fall from the rafters). She also appears to represent the dangerous allure of suicide, courting Henry with a song she sings about how everything is fine in heaven, set to an extraction of the distant, reverb-laden organ music that invariably creeps into the soundtrack. At one point Henry enters the radiator and tensely approaches the woman onstage, only to have her disappear. Shortly thereafter, he ducks away behind a black curtain on the side of the stage, where his head is flung off and replaced by that of his premature baby, a succession of images which eventually gives rise to the sequence from which the film gets its title.

There are also times when the source of these episodes is more elusive. For instance, the film's opening sequence is an abstract, distended reverie involving cosmic imagery. The first frames show Henry's face - frozen with the same hyper-sensitive expression he wears throughout the film - superimposed over a crude rendering of the moon. Lynch then presents an outstanding series of tracking shots that rove over the intricate textures of the moon, which are substantially more eye-catching because they are shot in lovely black and white. It is perhaps no mistake that later, shots of Mary lying in bed look strikingly similar to lunar landscapes, with the organic roll of the sheets bearing a resemblance to the mountains and craters of the moon. The opening sequence also includes a foreboding shot of a sort of Sisyphean figure mechanically pulling levers while gazing out an empty window beside him, a man, covered with epidermic imperfections, who appears to live inside the moon, his levers seemingly controlling the universe. This figure returns a few times throughout the course of the film, provoking shock in Henry. 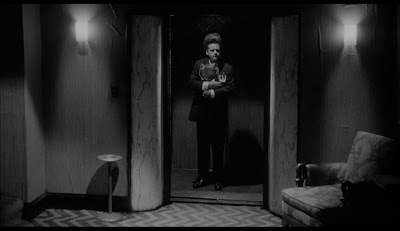 As much as Eraserhead lounges in these kinds of otherworldly stretches, it is really a film about a basic human emotion: fear. Fear of parenthood mainly, but also fear of adulthood, fear of infidelity, fear of seriousness, fear of insignificance. In this sense, Henry and Mary's baby is the physical manifestation of Henry's fear, all the more revolting given the extremity of his fear. Because Henry is premature, not one bit prepared to handle the stresses of having a wife and leading an adult life, his baby is premature. Therefore, when the baby cries, it eats away at Henry like a cancer, positing the mounting power of anxiety. Henry is also tempted by the sensuous woman who lives across the hall when she supposedly locks herself out of her apartment late at night. The scene when she invites herself in and deftly, mysteriously offers herself is handled with great skill by Lynch, one of those rare moments in his work when a scene gains all of its tension from grounded drama. When the two begin making love and the woman spots the mutant baby, the bed turns into a jacuzzi of thick, whitish liquid, a sexually charged reminder of Henry's infidelity as they begin sinking in. Henry's immediate surrounding are constantly viable to change given his conflicting inner states, a sentiment that is reprised when he later sees the woman with a new man across the hall and his head transforms back into his baby's.

Ultimately, what lifts the film from becoming an entirely gloomy allegory on fear is the spastic sojourns into silly dark comedy. Henry's dinner with the X's is a telling example. Mr. X, an awkward, boisterous, endlessly quotable character, seems to have come from a separate film, like some lost episode of The Pee-Wee Herman Show. Starkly contrasting the solemn, vile, unpredictable mother, he makes an earnest attempt at getting to know Henry. His first speech comes from across the living room in the kitchen, where he enthusiastically asks Henry about his occupation, eventually taking the opportunity to boast about how he put up every pipe in the so-called "neighborhood", proving it by insisting that everyone look at the toll it has taken on his knees. The family then sits down to dinner - a proud recipe of chickens that are smaller than Mr. X's fists - and he makes unusually broad small talk with Henry, after which he holds a monumentally goofy face for an extended period of time. It is playful moments like these that make the film so diverse. 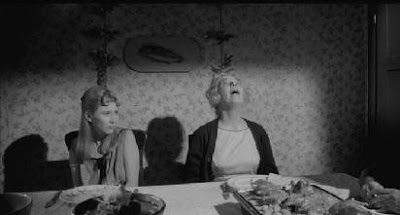 Eraserhead reportedly took several years to film and it was an ambitious, personally debilitating journey at the time for Lynch, who himself was struggling with the onset of fatherhood. Fortunately, he was able to fight the practical obstacles inherent in its production and create a film that is so focused in its vision and tone that it never once shows signs of letting up. Technically, it is absolutely brilliant. The cinematography is impressively detailed, with sinister patches of light selectively revealing certain objects in the interiors while the rest of the frame is left pitch black. The camera remains tense and poised, and frequently when the film enters dream logic, it will seek out these dark orifices to immerse the screen in black. Always though, the apocalyptic sound design by Lynch and Alan Splet will remain one of its most rewarding traits, a relentless industrial drone which ever so often is transformed into eerie musicality. It's a film I could probably write so much more about, but it is most honestly encapsulated as an utter masterpiece of unique vision in the cinema.
Posted by Carson Lund at 9:42 AM