Brüno (2009) A Film by Larry Charles and Sacha Baron Cohen 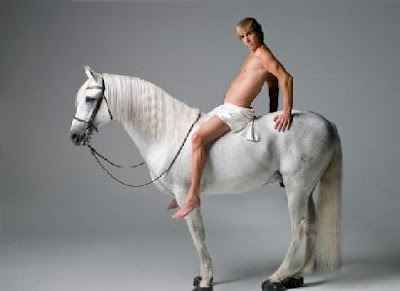 If cinema is an arena solely for the impermanent, a place where the here and now is celebrated in an uproarious, trashy fashion, as the film theorist Siegfried Kracauer sanctioned, then Sacha Baron Cohen's wickedly subversive mockumentaries may be today's holy grail. After 2006's Borat shook the nation with its monumentally touchy anti-Semitic content, Baron Cohen, the brain behind it all, has returned with another feature film starring one of his over-the-top characters, whom he first introduced in the HBO series, Da Ali G Show. Borat was a guileless Kazakh who was way out of step with the world, preordaining his own quasi-ancient sensibility with complete obliviousness; Brüno is just as blind to societal mores, but he seems more a premonition of some sort of futuristic, hyper-image-driven America, where common decency has totally lost out to impulse. What better time for his revelatory comedy to slap us in the face, when the country seems just a wink away from his complete and utter debauchery? In fact, this film may have been better suited to the title of Fernando Meirelles' film last year: Blindness.

This is not to say that the film, directed by Larry Charles, browbeats us into seeing the wrong in society. The intention is hysterics, not didacticism. People in the audience were laughing boisterously, and I suspect that less than half left the theater discussing the underlying politics of the film. Brüno unrelentingly releases shockwaves of sight gags, silly monologues, and stirring political incorrectness; it moves so rapidly that there is little time to ponder the vicious satire Baron Cohen is serving up. It is only now, as I'm writing, that I'm nodding my head and thinking of how deep and textured Baron Cohen's cultural commentary is. I think this is the way the film is meant to be experienced, and as a one-time experience to be sure.

Brüno is a homosexual Austrian fashionista with sketchy national acclaim, yet he believes he's "the greatest person in the country". Like in Borat, something goes wrong on his home turf - in this case, Brüno, while sporting a new, totally velcro one-piece, trips over loads of material backstage before walking out onto the runway like a living hamper - which forges a drive in him to travel the world and gain fame. With his "assistant's assistant", he heads first to Los Angeles to become a movie star, then to the Middle East to solve a "crisis" (in a jab to the fashionable act of humanitarianism), and then back to the U.S. to convert himself to heterosexual in the southern states, a ditch effort that he believes will be his first step to fame. Along the way, he illegally adopts a little black boy (by sending him through the sub-deck of a plane in a box marked "fragile"), campaigns his grotesquely unappealing television show (which one of the television agents deems only appropriate for those with severe mental issues), and makes a brief stint in the army, a suggestion from his Jesus-loving gay converter. It has been criticized for taking much of the narrative structure of Borat, but what's successful should sometimes not be tampered with. Fortunately, the biting truths that Brüno reveals (those of homophobia, celebrity worship, parental neglect, religious fanaticism, and general bigotry) do not pale in comparison to Borat's.

Much of the reason why Brüno succeeds as a film comedy in its own right is its slapdash, documentary-like quality. The majority of the scenes are unstaged, which brings more forthrightness and shock to Baron Cohen's antics, of which politician Ron Paul, singer Paula Abdul, and Bono, among others, fall prey. Baron Cohen has been tried countless times by the people who appear in his films, simply because he often times gives them the bare minimum in information. Such reticence paves the way for better, more ecstatic responses. When scenes are staged, as in the film's final music video, which suggests Bruno may have gained the popularity he yearned for, the comedy suffers. Thankfully, Baron Cohen runs rampant around the film like an animal, providing us with repulsive, ludicrous, offensive, and utterly hilarious trash. Brüno and Borat prove there's nothing wrong with occasional trash, as long as you know what you're in for.
Posted by Carson Lund at 8:27 PM