Bob Dylan made an album in 1964 called "Another Side of Bob Dylan", which suggests there are only two sides. However, as Todd Haynes understands and displays with startling freshness and conviction in I'm Not There, there are actually almost an immeasurable number of "Bob Dylan's", for he is changing from moment to moment, one of the most ephemeral and elusive icons in American music. Such qualities inform the film's succinct title - which is pulled from a song off of Dylan's basement tapes - implying that the Dylan the public thinks they know is most likely a step ahead of their perception. Haynes has made a career out of paying homages to recognizable forms (Sirk-influenced melodrama in Far From Heaven, early horror film in Poison, and the Antonioni-esque suburban exploration in Safe) while simultaneously re-imagining them. Here he utterly dissects the traditional biopic and manages to forge the same uncertainty regarding the Dylan legend that is so central to his figure by creating a visual collage featuring six different actors embodying different eras of Dylan's life.

Chronologically, they are as follows. Marcus Carl Franklin plays Woody, a young African American wunderkind with immense reverence towards his idol Woody Guthrie as well as the musical influences that he has grown up immersing himself in: Depression-era Jazz, blues, and Deep South country. As the teenage Dylan, Ben Whishaw plays Arthur Rimbaud, the introspective poet in Dylan whose entire screen time is spent in a white interviewing room musing enigmatically on life and art before the baffled journalists. Christian Bale takes a turn as the early troubadour folk singer Jack Rollins who, after being brought into the world by another singer named Alice Fabian (Julianne Moore as Joan Baez), transforms into a political voice for the common man. The film's finest performance comes from Cate Blanchett as Jude Quinn, who completely burrows into the brief window of time (1965-1966) in Dylan's career when he shocked the world with his turn to electric and became a flamboyant, complex, slippery, substance-abusing pop star. Heath Ledger's scintillating appearance as the embittered egoist, the has-been, and the romanticist with wife Claire (Charlotte Gainsbourg) then gives way to Christian Bale again as a washed-out born-again preacher. All of this culminates with Richard Gere's Billy the Kid, a more recent, Americana-influenced Dylan, looking like a hero of the Old West, a portrayal that inhabits the most hallucinogenic episode of the film.

As much as this may paint a linear picture of Dylan's turbulent life, I'm Not There does not end up so tidy. During the last ten minutes of the film, Gere's Dylan ruminates via voice-over: "It's like you got yesterday, today and tomorrow, all in the same room. There's no telling what can happen." Essentially, this is the blueprint the film adopts stylistically. Haynes shatters the biography of Bob Dylan into a temporally unpredictable mosaic that leaps from one time period to another with rhythm-snapping immediacy. It does not do so in a typically hyperlinked manner, where the chaotic flow of the story simply functions as a primer through which to investigate a straightforward narrative. There is no master plan here in terms of the film's "narrative", no satisfying end result; instead, Haynes builds upon his own kinetic energy with associative, poetic links, the overarching theme being Dylan's unexplainable urge to be non-conformist, to not fit comfortably into any musical trends, to not give easy answers, and to live freely without the constant repercussions of his musical fame. Moreover, Haynes gives each alcove of time its own stylized milieu: Quinn's segment, shot in crisp black-and-white, plays like a hybrid of D.A Pennebaker's fly-on-the-wall technique in Don't Look Back (1967) and a more socially observant, refrained portrait circa Fellini's 8 1/2; when Jack Rollins is detailed, the film becomes a talking-head, musical faux-documentary complete with seemingly archival photographs of Rollins with Fabian; scenes involving Billy the Kid adopt the contemplative Western tone of Sam Peckinpah's 1973 film Pat Garrett and Billy the Kid (which included an acting role by Dylan himself) and an even more Felliniesque, dreamlike excursion into a small town filled with masked children. 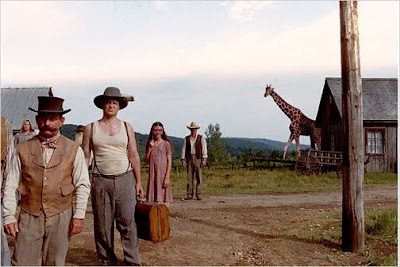 In capturing the excitement and gusto of a musical career, Haynes also plumbs the stylistic skill-set of Jean-Luc Godard, one of the most lively and energetic of all filmmakers. Godard's influence is seen on numerous occasions, starting with the general spunk of the camerawork, its unsparing use of micro close-ups, and the film's propensity to "jump-cut" into new biographical territory. Also, I'm Not There's refusal to conform to one particular storytelling technique - vacillating between documentary, introspective film-essay (set to Kris Kristofferson's deadpan narration), and normal cinematic narrative - mirrors both Godard's conceptual playfulness and Dylan's chameleonic nature. More specific examples of Godardian persuasion also make themselves apparent: Quinn's explosive "plugging-in" at the Newport folk festival begins with a figurative shot of him and his band-mates shooting rifles at the audience, which quite bluntly riffs on a famous Godard tic ("a girl and a gun", Cate Blanchett being the girl), and especially the film's opening title sequence, which utilizes simplistic typography with inventiveness and even flickers "I'm Not There" on and off to create different words.

I'm Not There is unlikely to illuminate Bob Dylan the artist anymore than what little is already known about him. At the same time, this is not what it's after, and Haynes has explicitly stated this. By giving the film an expressionistic bent through its many Dylan embodiments that are quite unapologetically astray from the actual Dylan, but rather projections of his mindset at their respective times (the Woody Guthrie-inspired childhood is the perfect example, where Dylan is literally black as a result of his largely African American influences), Haynes has managed to sidestep a conventional portrait of an artist in favor of an exploration of artistic expression in general and how its fulfillment can dog a person. It is a daring and compelling film, and although it sometimes takes on too many ideas all at once without regards to clarity and conciseness, it often does so for a reason. Bob Dylan is a confusing public figure, and it is foolish to try to know him outside of his outstanding oeuvre. I'm Not There admirably does justice to this fact.
Posted by Carson Lund at 9:27 PM

What may also be of interest is that two of the scenes with Ledger and Gainsborough were taken from Godard's 1966 Masculin Feminin. so you really hit the nail on the head with his Godard influence. I love that you mention the way he opened the movie, too. Anyway it's a really interesting film, and that was a great review.

Thanks, Polina. Great call on the Masculin Feminin references; I actually haven't seen that film yet, but now I'll be interested.