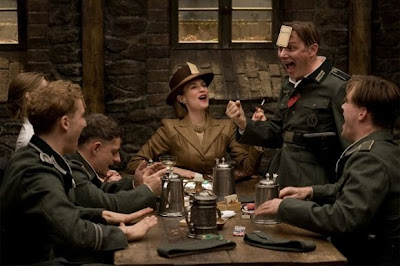 As those who know me may well be aware, I often times have a difficult time refraining from a round of Tarantino skepticism. Problematically though, I think that some of my reservations - which are all too often seen as bashing - only mask the fact that I truly do enjoy many parts of his films. His latest film, Inglourious Basterds, is yet another distinctive piece of Tarantino - referential, sanguine, irreverent, moody, and pulpy - which ironically means it's actually a rehashing of everything in film history that is not a product of Tarantino. He's a trumpeter of movie lore, a human of embodiment of guileless cinephilia, and to what extent his films are personal reimaginings of his influences or just broad, cartoonish "Where's Waldo?" games is a separate question. Inglourious Basterds is in love with its own fluffy movieness, which should be expected, but what so frequently is absent behind this reverential facade is humanity. Although Tarantino's films are all about blown-up, outsized emotion and technique, it's somewhat out of line to blow up criticisms as well, so I'll try not to navel-gaze.

The film is told in chapters, which gives the impression of a literary attitude right from the opening title card that braces us for an ensuing fable: "Once Upon A Time in Nazi-Occupied France". However, beyond this schematic structuring device, there is nothing more that is literary in the film besides Tarantino's characteristic love of words. The first chapter takes place on a farm, where Nazi colonel Lans Handa (Christoph Waltz), famously deemed the "Jew Hunter", arrives with a pack of soldiers to investigate the home of Perrier LaPadite (Denis Menochet), one formal stop on Landa's ongoing Jew hunting path. One girl in the Jewish family hiding at the LaPadite's, Shoshanna Dreyfuss (Mélanie Laurent), makes an escape, running for the hills as Landa temperamentally pulls his gun back and lets her go. This should come as no surprise given the generally goofy and nonthreatening demeanor he's introduced with, a personality that is skillfully handled by the multilingual Waltz.

Subsequent chapters detail Shoshanna, a few years later, running her aunt and uncle's beautiful independent cinema which was indebted to her following their deaths at the hands of the Nazis. A Nazi hero, film buff, and film star, Private Fredrick Zoller (Daniel Brühl), naively falls for Shoshanna even in the face of her immediate dismissal of him, an affection that leads to Zoller's attaining of Dreyfuss' theater for the Nazi premiere of "Nation's Pride" (a fake Eisenstinian Nazi empowerment film directed by Eli Roth, who plays the notorious "Bear Jew" in the film). On the other side of the war are the Inglourious Basterds, a gung-ho group of Jewish Americans led by Lt. Aldo Raine (Brad Pitt, speaking in a weird Tennessee drawl) who thrive on the scalping of Nazis. (Pitt's gleeful, unabashedly caricatured performance is one of the consistently reliable sources of entertainment in the film.) In a web of spy activity involving the German film star Bridget von Hammersmark (Diane Kruger), a select team of Basterds make their way into the eventual screening of "Nation's Pride", intent on blowing the place to bits with dynamite and killing the most powerful Nazis once and for all. Little do they know how closely their plan reflects Shoshanna and her negro projectionist's, which involves their own, personally produced revenge film (to act as an addendum to "A Nation's Pride") and a pile of nitrate film.

This uncoils for two and a half hours, and most of the time Tarantino is only scantly progressing the plot, instead luxuriating in his own nihilistic tics. Most scenes last several minutes past doing their job narratively, so Tarantino fills the dead air with protracted scenes of human interaction or over-the-top violence. One in particular sticks out bluntly: in a basement party celebrating the birth of one Nazi soldier's boy, von Hammersmarck, as a gorgeous spy, enjoys silly drinking games with the men. Two Basterds are furtively at the party as well, and through Tarantino's coy direction, where characters slowly bounce rhetoric back and forth, the scene eventually builds to a stand-off involving three guns pointed directly at the testicles of three men. By all means the sequence is rambling and does not feel substantial enough to warrant the rapid, explosive bloodbath that it inevitably culminates with. We know what's going to happen, but Tarantino delights in sensory overload regardless, just like in the opening when after a length of tense interrogation between Landa and LaPadite, the camera descends below the floorboards to reveal the Jews hiding beneath it. I'm not saying that such sequences don't involve a great amount of humor and idiosyncratic staging, but I am questioning Tarantino's need to indulge so heavily. A similar annoyance is forged when the film presents random stylistic devices - an electric guitar noise that introduces titles for characters posed in freeze frame, a sporadic narrator who seems more fit for a shitty parody in the Scary Movie lot - and then abandons them just as easily.

Considering it is somewhat widely acknowledged, to say that Tarantino's films smack of gimmickry is redundant. The director himself accepts this as readily as he proclaims through Brad Pitt's final dialogue that the film is his masterpiece. Inglourious Basterds is no exception; as a vastly revisionary World War II period epic funneled into a pulpy western a la Sergio Leone and a Germanic melodrama in the vein of Pabst and Fassbinder, the film's bizarreness, conceptually, is central to its success or failure. On one end of the stick, this blueprint, which treats the Holocaust with lighthearted, playful vengeance, is sure to offend many, while on the other, you have to appreciate Tarantino's willingness to upend the conventions he's working under, and his ability to provide a consistent air of comedy to a topic that is most typically portrayed with grave solemnity. I believe in the latter, because I prefer not to let morals or proper manners get in the way of a film's integrity as a film. By contrast, Inglourious Basterds' tone is refreshing and spunky, and stands beside the hysterically self-indulgent and minor Kill Bill films as Tarantino's boldest conceit yet. Although it lends itself to a highly modular affair which sometimes plays like a chain of short films cycling around the same event, most of them are very entertaining, and sometimes hilarious.
Posted by Carson Lund at 9:52 AM

You're right about not letting morals intrude on the integrity of a film. I really liked the movie and put in on the same level with Pulp Fiction. Tarantino's stories are so unbelievable, but he's good at making art out of the preposterous. Waltz completely stole the show.

I goy my own review up today, and interacted with yours. See here.