While INLAND EMPIRE may be the most inscrutable, impenetrable, incoherent, even aggravating film of David Lynch's career, it is certainly the most significant. With it, Lynch has made a massive unspoken statement on the power of cinema as an art form: there is no right or wrong, and that the pairing of sound and image can be beautiful even stripped of narrative causality or commercial aesthetics. Lynch does not merely fiddle with the mechanics of both; in fact, they're not even on his plane of thought anymore. There's little that grounds INLAND EMPIRE to film at all, other than the fact that stretches of it revolve around Hollywood and that a camera created it. Still, Lynch does not use a film camera, but instead makes the transition from the cumbersome medium of film to the expedience of digital, from the grain to the pixel, from shooting a scene to being "deeper inside the scene". But even then it is not just the swift import of digital that he is after. Had this been the case, he may have moved to the Red camera, as Steven Soderbergh (for Che) and Roy Andersson (television commercials and supposedly his forthcoming feature) have, in which case a look of sleek quality could be obtained under convenient working conditions. For Lynch, the fuzzy coarseness and magical permeability of digital is his prerogative, so he descended to the level of a consumer camera, the Sony PD-150, with which the musty dreaminess of early silent cinema is regurgitated in a new light.

Lynch's roots are as a painter, and he cites his early shorts as the most conscious extensions of his painting, but INLAND EMPIRE may be the better example. He first came upon the need to work with film when he decided that a plant in the dark was not sufficient enough a work of art without the sound of the wind's rustling of the leaves. This penchant for extracting the sublime out of prosaic objects is rampant in Lynch's latest; lamps, walls, hallways, light-bulbs, and the human face are all given exacting and lengthy attention, and their employment within the frame is always malign, foreboding, and drenched in a foggy palette that is at times reminiscent of runny watercolor paint. The video quality runs from relatively clean and sharp to muddy and harshly pixellated, so much so that under low light situations the image becomes difficult to read, allowing "room to dream". What Lynch means by this typically vague statement is that one has to attempt to decipher what's inside the frame, and this becomes a compelling idea in itself.

This aesthetic, which stands as the most assured and seductive statement with the new media to date, is utilized for Lynch's most free-associative film yet. The rate at which it vacillates between its several shards of narrative is entirely dependent upon Lynch's uninhibited psyche. It's as if through transcendental meditation he has discovered a new way of filmmaking, of acting spontaneously upon ideas buried deep within himself without regards to coherence. INLAND EMPIRE revolves around Laura Dern's showstopping performance; her various selves consist of an established Hollywood actress named Nikki Grace, a haggard prostitute with a band of singing and dancing whores who shift their locales (icy Poland, cosmopolitan LA) with the snap of a finger, and a Southern adulteress named Susan Blue, the character Nikki is starring as in the film On High in Blue Tomorrows aside Justin Theroux's ladies' man Devon Berk. There are connections to each of Dern's embodiments, but as the extra-dimensional labyrinth unfolds, it becomes uncertain which portrayal is ostensibly "real", or if any are. Dern's Nikky/Sue however is not the only enigma to sort out, for there is also a historical figure, a seemingly deceased Polish prostitute (perhaps the star who died in the first attempt at On High in Blue Tomorrows, thus setting the supposed curse on the film) who stares periodically throughout the film at a television which shifts from static to Nikki's "real-time" experiences to an absurd soap drama with life-size rabbits as the droll protagonists. Furthermore, Nikki's suspicious Polish husband seems to hold links to both the past and a current troupe of threatening Polish circus workers. 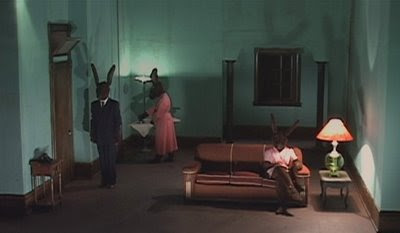 If you're attempting to decode the film's mysteries, there's more. Atop this baffling narrative, there are a great portion of visual and aural rhymes that scatter throughout. Different characters repeat the same portentous lines in different portals of time, the mysterious phrase "axxon n" shows up on walls during many of Nikki's dimension-swapping moments, and Grace Zabriskie has some sort of preternatural bond with everything that happens, evidenced by her soothsaying arrival at Nikki's mansion in the beginning of the film. Nikki tells her that there is no murder in the script for On High on Blue Tomorrows, but Zabriskie's character creepily insists that there is indeed "brutal fucking murder". She then goes on to give an anecdote about a boy who walked through a door and "evil was born", and a girl walked through a door and got "lost in the marketplace". If Nikki's ensuing bouts of extemporaneous shifts in time and place are likened to a marketplace, there are perhaps enough motifs in the film to account for each item in the marketplace.

INLAND EMPIRE can be read as a lot of things: "a woman in trouble", the encapsulation Lynch so adamantly sticks by, a comment on the morphological nature of film acting and becoming lost in the role, another indictment of delusional Hollywood, an exercise in time as a continuum, or an elaborate nightmare housed in the mind of a deeply regretful woman (the Polish woman in front of the TV). I don't think that there is any such succinct interpretation of the film though; there is too much complexity to come at in a narrative or allegorical mindset. The film is best appreciated as a purely avant-garde work that washes over the viewer chillingly. Lynch knows how to suffuse commonplace moments (Nikki wandering through a film set or down a hallway in broad daylight) with frightening purpose, accompanying the entire film with pitch-perfect sound design, either the shrieking clamor of violin strings, the characteristic low hum of all of his films, or an array of magnificently placed musical cues, like Beck's "Black Tambourine" or Lynch's own "Ghost of Love". The rabbit sitcom is another story, but jibes with the whole film's teasing undertones even given its modularity. Call it self-indulgent, but don't deny its cinematic importance and destabilizing mood.
Posted by Carson Lund at 3:32 PM