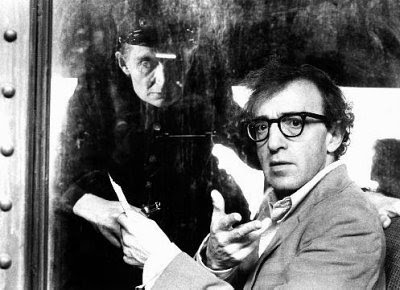 Stardust Memories opens in the style of European angst-ridden art cinema, presenting, quite uncharacteristically for an early Woody Allen film, an elongated silence aboard a train where Woody himself sits blankly amidst a crowd of sick, sad souls he believes are staring at him. The train begins moving, Allen grows paranoid and bangs on the walls to get out, and eventually he finds himself and the passengers trudging a deserted plane littered with heaps of smashed car parts, quiet with the exception of the solemn wheeze of the wind and the caws of the circling crows. The scene is unapologetically fraudulent of both Federico Fellini and Ingmar Bergman, two of Allen's most cherished directors; precisely, it is an homage to opening scenes from two of their works, respectively: 8 1/2, where Mastroianni's character is trapped inside a car in a traffic jam, and The Silence, where the young Johan travels on a train to an unknown destination (at least figuratively), the rhythmic exchanges of light toppling over his face much like they do to Allen's and his fellow passengers. This unexpected repose jarringly concludes to reveal silhouetted film producers bickering about how the aforementioned sequence is too pretentious, too arty, and that it ventures into that tired territory of art reflecting anguished state of minds. Of course, they look at it in an unfairly reductive manner, for the sequence, which proves to be test footage for the new film by comic director Sandy Bates, is actually one of those moments of touching homage in Woody Allen's career, and it succeeds marvelously. That it's so compelling despite its brevity, and that the jabbering, half-witted entertainment heads respond to it so negatively, speaks both to a central conflict in the film and Allen's rebellious stance.

This conflict deals with Bates' desire to flee from the satirical comedies that made him a filmmaking icon and move towards richer, more mature pieces of art that reflect reality and human suffering, while his audience insists he remain a purely comic genius. Trouble is, Bates doesn't feel funny anymore; there's no passion to compel him forward with the type of works shown at his popular retrospective. Imbued with a bit of Bergman's own life (the retrospective takes place on a bleak seaside), Sandy Bates is clearly a doppelgänger for Woody himself at this point in his career, although that certainly doesn't imply that Allen ceases to be funny, only that he's growing distressed by the widespread reduction of his filmmaking to mere comedy. Bates is frequently reminded by his omnipresent fans that they especially enjoy his "early, funny ones," and it's an obvious reference to that favored adage of Allen's early admirers. While Stardust Memories often times shares much in common with the very films these fictional fans allude to, it's also one of Allen's most outspoken attempts at cinematic art rather than just a slapped-together, one-off comedy romp. 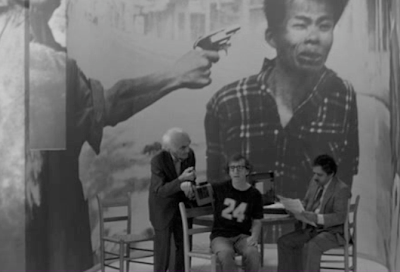 A vivid example of this artistic ambition is Allen's structural play in the film. Rarely in his career does he venture out of his comfort zone, which is mainly straightforward narratives, but here he aims to adopt the extemporaneous weaving of past and present, reality and fiction, and memory and dream that is not only specifically reminiscent of Fellini's 8 1/2, but also more generally of the films of Godard, Bergman, and Antonioni. Bates' confused, casual interest in three woman – his emotionally feral ex-girlfriend Dorrie, his current French lover Isobel, and an intellectually earnest young brunette he meets at his retrospective – is depicted in an atemporal manner, the three figures fusing into the film at random times to illustrate the feral, immediate nature of Bates' desire. Not only does this uncertainty in romantic affairs contrast strongly with Allen's head-over-heels devotion to women in films like Annie Hall and Sleeper, but it lines up evenly with the common arthouse treatment of the modern woman in the 1960s as beautiful but distant and enigmatic. The assembly line of raucous fans begging for autographs or artistic explanations – who more often that not look directly into the lens as we adopt Bates' perspective – frequently set off unexpected detours to completely different scenes to emphasize the need for escapism, a concept that directly recalls Mastroianni's impotent director in 8 1/2. Allen shifts between these moments with surprising efficiency and impact, suggesting a director with a capability to do more than just tell one-liners.

What do all these intertextual references add up to? Well, I think they're little more than Allen's warmhearted tributes to the cinema he loves. Many cite the film as an especially insubstantial or solipsistic for Woody, and they're not entirely wrong. But what's so striking about Stardust Memories is the way it distills so many of the heavy European arthouse concerns into measly hour-and-a-half running time that boasts all of the sharpness and nervous energy expected of Allen's filmmaking. Stylistically as well as structurally, the film pushes the boundaries of Allen's work; experimental tactics routinely break up a more formal approach, such as when Dorrie, played perfectly by Charlotte Rampling, breaks down in front of the camera via close-up, a frenetic series of fourth wall explosions meant to remind us of Liv Ullmann's camera address in Bergman's Persona. Similarly, in an earlier scene, Allen provides a long close-up of the blond Isobel (Marie-Christine Barrault) as she pulls her hair back, mirroring another shot of Bibi Andersson in the same film. Stardust Memories' most poignant achievement though is its ineffable mood, which lasts with the viewer in a way that his loose comedies don't: the feeling of mortality and insufficiency breezing through with the lightness of the crows in the opening sequence, and of the attempt to grapple with warm memories during an irritatingly impersonal event.
Posted by Carson Lund at 9:38 PM

A lot of tips though and there are a lot of easy and searchable sites to recommend at having things written in your essay. I’ve done that before about the first day of school in college. ’’what will you expect about school and write an essay showing your skills to the school’’ lols. Well in some way there is also lots of sites and tips like WritePaper.Info it is helpful to us to educate ourselves and best results will lead us there. Click on it. Good luck