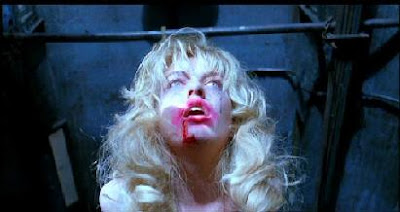 Following the widespread success of the television series Twin Peaks, the powers that be thought it necessary to tack on an obligatory prequel film, essentially a detailing of Laura Palmer's final weeks. Undoubtedly, Lynch's enthusiasm regarding the show was probably running close to empty given the amount he had to wrestle with television executives, which perhaps explains the indolent, free-for-all wackiness inherent in the film version. What many expected as an explanatory piece, Lynch does not provide, instead deepening the ambiguity of the series by piling on more and more symbols, Black Lodge enigmas, and non sequiturs. It's an oafish mess of a film, yet it is not without its pleasures, as it attains the sort of mystery that only Lynch could find in such a campy premise.

The film's first section is without question its most lackadaisical. Set somewhere around the region of Twin Peaks, it follows a previously unheard of FBI agent named Chester Desmond as he investigates the murder of a woman named Teresa Banks with a clumsy sidekick (Kiefer Sutherland). Lynch goes heavy on the lunacy here, offering up brief absurdist character sketches - like Harry Dean Stanton as a white trash murder witness - and unusual bits of secret agent insights: Desmond and his sidekick meticulously dissect an encounter with a zany woman dressed in red garbs introduced by Gordon Cole, the hearing impaired special agent played by Lynch himself. Once her body is found and returned to FBI headquarters, the two disappear without explanation. Then a portentous character played by David Bowie arrives in the offices, elicits a short burst of dream logic, and disappears as well, arousing suspicions that he was never there in the first place, although the security cameras tell otherwise. This is a confusing case of the eruption of mystery in everyday life, because Lynch never harps back on it, forgetting Bowie and the two investigators and even Special Agent Dale Cooper, the star of the television series who makes a brief appearance predicting Banks' murderer's next victim. That he predicts with such uncanniness the exact criteria of the next victim - a blond high school girl serving food at that very moment, to which Lynch cuts immediately to Laura working on "Meals on Wheels" - makes us wonder why Cooper could not have saved her, and by extension, why he drives into Twin Peaks with such newfound enthusiasm for the case when the television series begins. 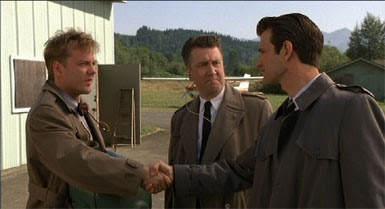 In fact, one of the major flaws in Fire Walk With Me is its dissonance from the show, especially when it comes to characters. The most salient example of this is Laura Palmer's best friend, Donna Hayward. Lynch was unable to cast Lara Flynn Boyle, the firebrand who portrayed her in the series, so Moira Kelly takes over, but with this change comes a complete transformation of the character of Donna; in the show she is a strong individual, whereas in the film she is emotionally fragile, timid, and always looking for verbal confirmation that Laura is her "best friend". Laura - whose face permeates nearly every scene following the initial section - does not fit the esteemed sweetheart description that was so prominent in the show, for Lynch gets right down to business establishing her as a feral piece of work with sinister ties. Never do we see a hint of humanity in her eyes, even during the few times that she's seemingly speaking from the heart. Sheryl Lee's performance as Laura is spot on when dealing with cryptic erotica, but if there's ever a scene that calls for emotion, Lee muffs it and comes across awkwardly, ultimately leading to her inability to carry the film. Fortunately, Ray Wise as Leland Palmer, her self-feuding, antagonistic father, picks up the energy that she lacks.

Because the film only answers shaky questions that were already explained on the show, once can't help but think Fire Walk with Me is simply an excuse for Lynch to return to the mordant dreamworld of Twin Peaks, to revel in the perplexing imagery of the series once more. In tone, the film most closely resembles the final episode, with illusory interruptions left and right. The red room, or Black Lodge, is revisited frequently, although this time new characters arrive, such as a boy beneath a mask with an elongated nose, an old woman who constantly is pointing or offering pictures of empty rooms to Laura, and even a menacing primate. They are each curiously entrancing, but whether there is meaning to each individually is up in the air. Most disappointing though is the fact that their arrivals mean the omission of the giant and the butler from the series, and ultimately the abandonment of coherence. The film gains some life towards the end, once Lynch's (and Laura's) hysteria begins to take full force, but on the whole it never appears to have a raison d'être, making us long to get to the point in the story where we hear Jack Nance's character recite the famous words: "she's dead, wrapped in plastic".
Posted by Carson Lund at 9:45 AM

You have written an excellent review but I disagree fundamentally. For me Fire Walk With Me is the most powerful and resonant film Lynch has made and one of the best films I have had the privilege to see.

"In fact, one of the major flaws in Fire Walk With Me is its dissonance from the show..."

There is a dissonance from the show in both mood and story because the film deals with truths not falsities and speculation - and they are uncomfortable truths.

"...but if there's ever a scene that calls for emotion, Lee muffs it and comes across awkwardly, ultimately leading to her inability to carry the film. Fortunately, Ray Wise as Leland Palmer, her self-feuding, antagonistic father, picks up the energy that she lacks."

I thought Lee's performance was mesmerising. Ray Wise was the only actor who seemed to get carried away with the febrile nature of the story and fall into pantomime expressions

"..but on the whole it never appears to have a raison d'être..."

I think it works as both a stand-alone film and as flesh on the bones of the series (which I think began brilliantly and quickly deteriorated). Does any film have to exist? It exists to give us a very rare opportunity to act as the angels that vanish from her bedroom painting - to be with her when everybody else has abandoned her.

It is a truly horrifying and beautiful film.


I have enjoyed reading through your posts - they are eloquent and insightful. However, this film is (in my opinion) so great that I had to add my thoughts.

I wrote my own thoughts here, if you are interested in them:

Stephen,
Thanks for weighing in with your thoughts. Obviously, I disagree. I think its construction is simply sloppy, from the acting to the forced episodes of comic relief to the musical cues and finally to the inclusion of so many ambiguous figures. Regardless, it's always nice to see someone who will have a different opinion than your own, so I appreciate it.

I read your piece on the film. I can't say I disagree with much. Your emotional reaction seems genuine. I especially find your comparison with Mouchette interesting (however, I hope you're not denigrating in favor of Fire Walk With Me). However, I feel that Lynch always takes an unflinching look at troubled female leads, and this just happens to be one that's ineffective.

These attributes would seem to line up more comfortably with Naomi Watts in Mulholland Drive, Isabella Rossellini in Blue Velvet, or even Patricia Arquette in Lost Highway.

Once again, thanks for commenting. Feel free to chime in elsewhere on my blog if anything sparks a thought.

After finally watching the entire TV series (thank you, Netflix), which during my college years back in '89-'90 I just couldn't make time for, I was able to take on this controversial prequel. In my review I explain why I think it's not very good, though considerably better than its reputation suggests. I think Lee's performance is outstanding, though agree with you mostly about the prologue, which should have been scrapped entirely in favor of more scenes from Laura's story, particularly those involving characters from the TV series who remained underdeveloped here.