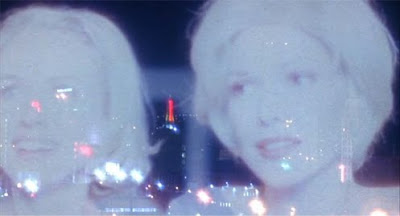 In many ways, David Lynch's Mulholland Drive was a summation of his career when it was made, the addition of any set of themes, images, and intertextual references into one composite whole. Similarly, it allegedly stands as his final work on celluloid, as he has now transitioned into the more nebulous realm of digital video. It is, then, perhaps fitting that with it, he ransacks the history of cinema, not always specifically but broadly, paying impulsive tribute to the recognizable traits of Hollywood movie genres more exhaustively than ever before. Furthermore, the film is largely about Hollywood, a Los Angeles-set exploration of the dream-machine, the naive thirst for stardom, and the cruel machinations of the entertainment business. Lynch targets these ideas from a characteristically obtuse angle, recontextualizing Lost Highway's doppelgänger technique but also twisting its focus on jostled identities into a flip-flopped dream, deceptively straightforward at heart rather than ourobouric.

A hopeful young actress named Betty (Naomi Watts) is the victim of these Hollywood fantasies. She comes to Los Angeles to take a stab at an acting career, staying in her aunt's vacant apartment. When she gets there however, she discovers the place is not empty, for it houses the amnesiac woman who stumbled off Hollywood's hills in the first ten minutes of the film following a brutal car crash. In Hitchockian manner, this woman (Laura Elena Harring), a voluptuous brunette, handpicks the name Rita for herself when she sees it on a Gilda poster on the wall. Contrary to rational logic, Betty is not unsettled by the creepily silent, blank-slated Rita. Alternatively, she assists her in a Nancy Drew-style investigation into Rita's real identity, leading her enthusiastically into the puzzle even when it suggests noirish tomfoolery - Rita's purse contains wads of cash and an inexplicable blue key. A rotting corpse is eventually discovered in the apartment of a certain Diane Selwyn, the lone name that Rita can remember, prompted by its sighting on a waitress' pin. 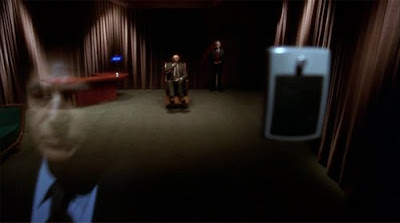 During the search for Rita's identity (no pun intended, but this also takes on metaphorical undertones in several instances), the film treads over all sorts of brief pastiches channeled from genre clichés. In a subplot, a pompous young director named Adam Kesher (Justin Theroux) lives through a day worthy of screwball comedy had it been given more comic emphasis. First, his creative freedom is ripped from him by a behind-the-scenes corporation bent on making an unknown actress, Camilla Rhodes, play the lead role in his movie. Then, after the production is shut down, an ominous phone call like those in Lost Highway tells Kesher's production assistant to send him atop the hill for a meeting with "The Cowboy", a quick, hackneyed foray into the western. Kesher also comes home to his wife cheating on him with the electrician, which turns into a run-of-the-mill revenge sequence topped off with fist-fighting. In another subplot, a clumsy hitman sets off a string off mishaps when he mistakenly shoots through an office wall at a woman not part of his gig, a hilarious shoot-em-up coincidence that feels spliced out of Pulp Fiction. Despite the banality and familiarity inherent in these scenes, Lynch makes them strangely discomforting by fiddling with the atmosphere slightly by adding one of his visual tics (buzzing lights or lamps partly illuminating red walls) or transforming the expected dialogue into something oddly strained and seemingly symbolic.

We discover that this is all because "Betty" is living a Hollywood movie, a bloated fantasy littered with the generic references one might expect would be floating around in the mind of a hopelessly determined wannabe. It is no flaw in the direction that the first hour and forty-five minutes of the film come off as hammy and unlikely. Despite this though, Lynch supplies everything with a dose of off-kilter menace, either through the use of Angelo Badalamenti's moody droning soundtrack or his penchant for larger-than-life caricatures, so it's given the uncanny tone of a dream. Like Blue Velvet, Mulholland Drive relies on a central dichotomy, this time of reality and the dreamlike construction of it. Naomi Watts' ability to actually act eventually wallops the viewer when she performs in a rehearsal for a part in a melodramatic scene aside a veteran actor. This is also more or less a turning point in the film, the moment when Watts' character's overacting topples over first into heated erotica and then hard-boiled realism. The final section of the film is a startling shock of reality featuring Betty, whose name is now Diane Selwyn, as a worn-out, embittered loner denied by her lesbian infatuation - the successful actress and love object of Kesher, Camilla Rhodes (Harring again) - and left with the inevitable remains of an unsupported go-get-em attitude: a neglected, lowly production worker. Naomi Watts, with her dynamism and complete understanding of Lynch's purpose, makes a case for herself as one of America's finest actresses. 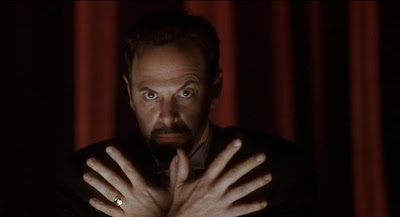 Perhaps an even more substantial turning point in the film is the Club Silencio sequence, which takes place in the middle of the night after Rita wakes up in a trance-like state whispering Spanish phrases: "No hay banda...Silencio". Betty and Rita take a cab to a deserted theater downtown, and their entrance is viewed from a creepy, distant trajectory across a naked alleyway (with the exception of blowing papers), a shot which then chases them inside only to be denied entrance before the doorway. The lively jolt of the camera forward suggests a hidden observer, like the grotesque vagabond from behind the diner who is introduced earlier in the film, but it also simply underlines the subtext of the coming scene: all is illusory. Although an audience is aware that there are real humans behind a work of art, it can still be moving. This is the case for the bizarre stage transposition that takes place, where a mysterious showman staunchly urges that "there is no band, no orchestra...it is all an illusion" before giving way to a singing performance by Rebekah Del Rio in which she faints halfway through and the heartrending pierce of her voice remains intact. The theater soon fills with fog and sputters with spotlights, piling on the weirdness as Betty convulses in her seat. This is the most beguiling, thrilling, moving sequence Lynch filmed since parts of Eraserhead, and I can hardly make it out without getting chills, if not tears. Betty and Rita leave it with the discovery of a blue box seemingly fit for the key from Rita's purse.

Lynch tosses around several overt nods to classic doubling films throughout this section of the film; a screen-filling overlap shot of the two woman's faces in bed echoes Ingmar Bergman's Persona, while Rita's application of a blond wig to closely mirror her savior Betty reminds us of Hitchcock's Vertigo. What's most interesting is how these manifest themselves so bluntly amidst an otherwise vaguely referential affair. One wonders whether Lynch actually self-consciously chose these riffs, or if he too is a victim, like Betty, of cinematic influence. Nonetheless, they resonate perfectly in the context of Mulholland Drive, adding an ever more complex dimension to Betty and Rita/Diane and Camilla's congruence in Diane's mind. Diane lusts so strongly after her object of desire that she projects herself into a dream in which the two of them are passionately in love and are perhaps two halves of the same person. Moreover, she puts the subject of her humiliation (Camilla's fiancé, Adam Kesher) through a troubling domino of events. 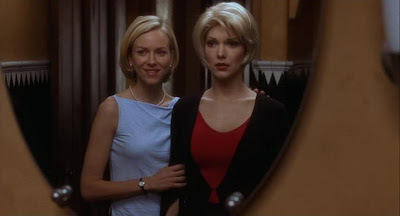 A fact that always manages to surprise me is Mulholland Drive's television pilot origins. I am extremely grateful for the network's denial of it though, for I think it caused Lynch to focus on the project with greater intensity, intent on bringing to the screen something that would succinctly visualize the story he was trying to tell. Had the pilot been accepted, Mulholland Drive may have become another Twin Peaks, releasing shockwaves of visceral moments but also being plagued by the fruition of slightly uninteresting backstories. The feature-length format allows these instances to be briefer and more potent, emphasizing their existence as Hollywood hodgepodge. After all, the film is very much about film, its power to influence people, and its unique ability to delight even in the face of trite surfaces, so it works best as a film. It also works as the greatest and most emotionally debilitating film of Lynch's career since his debut feature.
Posted by Carson Lund at 10:42 AM