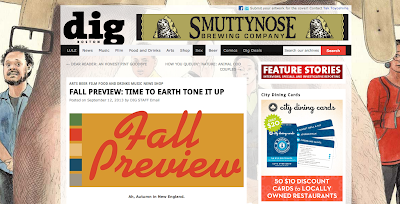 These days, I find myself writing less and less for this blog, and more for other outlets online and in print. This is a bittersweet truth; bitter because I hate the thought of facing the possible demise of this now five-year-old website which has become not only such a personal chronicle of my film watching but also a structural backbone to my life, and sweet because it means I'm spreading my horizons, finding more opportunities, for better or for worse, for my opinions to be heard. Still, the pleasures of the blogosphere – the sense of community, the abundance of impassioned reader comments – is something I miss dearly, and I will do everything in my power to reconnect with it soon. That said, I thought I'd fill everyone in on some other ventures I've pursued recently in addition to In Review Online.

1. I'm hugely grateful to Dig Boston, the city's last surviving alt-weekly, for agreeing to take me on as a freelancer, for being adventurous enough to publish two of my most scathing reviews in quite some time, and most excitingly, for representing the first instances of my writing appearing in glorious, tangible, old-fashioned print! Thankfully, the local culture hub also re-publishes their film section online, so for those outside of Boston, here are my reviews of The Way, Way Back (from way, way back in July) and Things Never Said. Also worth noting is my very brief blurb on Matt Porterfield's upcoming film I Used to be Darker, which appears as part of the Dig's all-encompassing Fall Preview.

2. Another Boston-specific outlet I've been writing for is Boston Viewfinder, an elegantly titled website dedicated to spreading the word on upcoming independent, experimental, repertory, and foreign film screenings in the area. The calendar was pioneered by Mariya Nikiforova and Stefan Grabowski, two active and longtime participants in the local film scene as the lead programmers (along with Jeff Silva and Alla Kovgan) of the essential experimental series Balagan (I've covered their screenings here, here, and here). For Viewfinder, I've been contributing film previews alongside such esteemed Boston film writers Max Goldberg (of Cinema Scope) and Dmitry Martov (of FIPRESCI, Mubi, and N+1, among other places). The website offers many riches; I invite you to peruse it.

3. The Online Film Critics Society just unveiled the top ten in their list of the Greatest Film Noirs, which was arrived at by polling the guild's many members. You can scroll through all 50 picks, along with eloquent justifications for their greatness, here. I was happy to sing the praises of Billy Wilder's Sunset Boulevard (at #12) and Jules Dassin's The Naked City (#43).

4. Over the course of the upcoming week, be sure to keep your eyes peeled for my dispatches from the New York Film Festival, which will be posted at In Review Online. This will be my first experience as an accredited member of the press at a major film festival, and I hope to stay afloat in what is sure to be an overwhelming screening schedule, including new films by Tsai Ming-Liang, Frederick Wiseman, Claude Lanzmann, Hayao Miyazaki, Hirozaku Kore-Eda, Hong Sang-Soo, Jia Zhang-Ke, and Corneliu Porumboiu, as well as a handful of raved-about 2013 Cannes contenders.

5. Finally, if you happen to be interested in more timely updates about my writing gigs, as well as mini-reviews of the films I see on a day-to-day basis (the kinds of experiences I once spilled 1,000 words about here) my Twitter is a good place to look.

A little delayed, but here's my 5-day-old review of Hannah Fidell's A Teacher (2013), a character-focused indie that desperately implies meaning and significance without actually delivering any. I briefly compare the film to Steve McQueen's Shame and Markus Schleinzer’s Michael, which gives a sense of the league of Ambiguity and Vagueness in which Fidell is stubbornly working.
Posted by Carson Lund at 1:23 PM No comments: