Jeannette: The Childhood of Joan of Arc (2018) A Film by Bruno Dumont 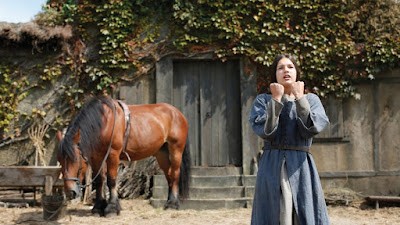 "For all its natural beauty and genuine sense of surprise, however, this is a film handicapped by Igorrr’s uniquely terrible music, a near-constant formless riffing that alternately suggests reheated Evanescence tracks, Raffi sing-alongs, and the electronic tinkerings of a GarageBand apprentice. Where the silences in between words in Dumont’s cinema used to be filled with spacious field sounds and feelings of unspoken dread, now they’re stuffed with skittering breakbeats and doomy double-bass-pedal hammering. It’s true that the disorientation produced in the collision of Igorrr’s frenetic style-mashing and Dumont’s unadorned long-take aesthetic ensures that the film feels remarkably distinct from prior cinematic adaptations of Joan of Arc’s life, but it’s also hard not to wonder how this particular story might have played without the farfetched musical conceit grafted atop it. As it stands, Jeannette is admirable in its defiance of recognizable modes and its naked showcase of Dumont’s exploding imagination, but it’s a tedious novelty indeed."