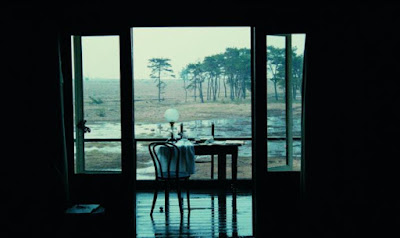 "In Andrei Tarkovsky’s The Sacrifice, the distance from hope to despair is a short jump—a chasm crossed with the help of something so immediate as a television transmission. As his birthday celebration winds down on a gloomy summer evening in remote Sweden, retired intellectual Alexander (Erland Josephson) tiptoes half-drunk into his living room to find a small company of friends and family bewitched by the soft blue glow of a TV set’s screen, out of which emanates an announcement of nuclear conflict. The warning winds down, the TV is turned off, and the mood descends—first into stunned silence, then into outright hysteria, and then into a kind of sedated anxiousness from which the film never quite resurfaces. In certain contexts, this dramaturgical pivot might register a bit maudlin, but in 2018, when Twitter and cable news provide an endless gushing stream of outrages, the film’s evocation of being rapidly thrown into disarray by a piece of topical turmoil hits home."

Kino released a new Blu-ray for The Sacrifice, so I reviewed it for Slant.
Posted by Carson Lund at 12:38 PM 4 comments: