Kwaidan (1964) A Film by Masaki Kobayashi

"Kobayashi's directorial control of these milieus is total, which is apropos given the fact that Hearn's stories feature characters in thrall to the whims of outside forces. For what ultimately amounts to slim (in incident, if not necessarily in length) and predictable tales of ghostly infringement on quotidian life whereby the arcs and the outcomes are more or less the same, it's the complete harmoniousness of the mise-en-scène that keeps them engrossing on a moment-to-moment level, unfolding less like crescendos to narrative surprises than wades through persistent and inexorable hauntedness." Full review of the heart-stoppingly stunning new Criterion Blu-Ray here.
Posted by Carson Lund at 9:58 AM 1 comment: 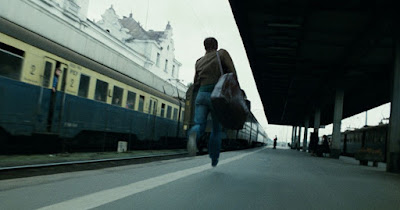 "In the beguiling but dense opening minutes of Krzysztof Kieślowski's Blind Chance, a series of succinct vignettes, arranged chronologically, but not in way that's immediately apparent as such, introduce us to Witek (Boguslaw Linda), a young Polish man. Strung together by the kind of ethereal theme music that would become a Kieślowski signature throughout the 1990s, various episodes from Witek's life play out as though the disconnected fragments of a pre-death hallucination. Among other vivid snapshots, he takes math lessons from his father, bids farewell to a childhood companion, peeps through a window as a child at an administrative meeting of some kind, kisses a girlfriend while being heckled by the occupants of a departing cargo train, and participates in an autopsy in a crowded medical room." Full review of the new Criterion disc here.
Posted by Carson Lund at 11:13 AM No comments: