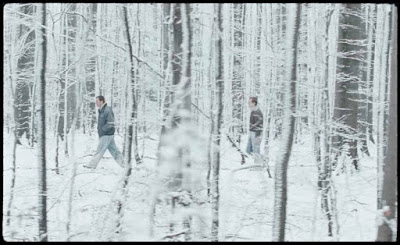 "Shot on desaturated Super 16 mm film in a Danish limestone quarry, Winter Brothers is one of the more aesthetically idiosyncratic directorial debuts in recent memory. Icelandic visual artist turned filmmaker Hlynur Pálmason, who decamped with his crew to the film's inhospitable setting for the duration of the production, approaches his chosen location like Michelangelo Antonioni did with that of Red Desert, transforming a place of grim labor and scant sunshine into a punctiliously designed cinematic space. Where Antonioni painted trees and grass to achieve his pallid industrial dystopia, Pálmason creates his by coating the scenery in calcite, dressing his cast in filthy faded denim jumpers, and partitioning the world into a careful visual system, with each location treated to its own rigorous compositional scheme. If nothing else, the film is a feat of formal conception and craftsmanship."

Full review of this incredibly striking directorial debut, part of the New Directors/New Films series, continues at Slant.
Posted by Carson Lund at 11:26 AM 5 comments:

Did You Wonder Who Fired the Gun? (2017) A Film by Travis Wilkerson 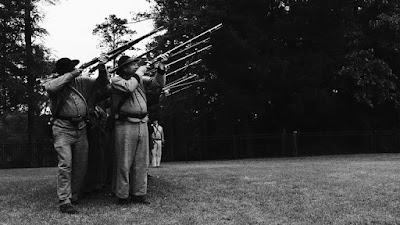 "The documentary Did You Wonder Who Fired the Gun? begins with a baritone voice intoning the following credo over pin-drop silence: “Trust me when I tell you this isn't another white savior story. This is a white nightmare story.” The voice belongs to director Travis Wilkerson, whose documentaries are often self-narrated, and here, sounding as though it belongs in a scare-mongering PSA, the voice immediately dispels any expectations of casual entertainment or purely pedagogical history lesson. In directly requesting the audience's trust, Wilkerson initiates a not-particularly-inviting proposition for the viewer, and specifically the white American viewer: Follow my lead, the voice seems to say, and my conclusions will make you uncomfortable."

Full review continues at Slant.
Posted by Carson Lund at 11:05 AM 8 comments: 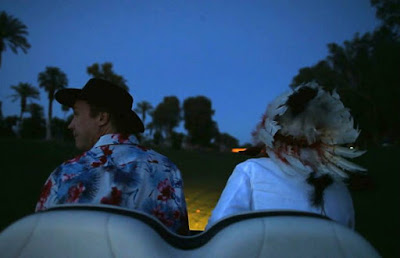 "In our drought-ridden Southwest, the sight of a sprinkler left to spray unsupervised for hours tends to cause alarm among the environmentally cautious. While cataloguing civic life on the periphery of Palm Springs, Robinson Devor’s Pow Wow internalizes this quotidian paranoia in its recurring images of golf courses being generously watered, the soothing buzz of which carries into the soundtrack as an uneasy refrain. The predominant subtext of this eccentric community portrait is the use and abuse of land in the Coachella Valley’s hostile ecosystem, a topic with historical and social dimensions that Devor teases out in small doses, all while positing water as a precious commodity with political significance of its own."