"In an age when Bob Dylan occasionally comes down to earth to lend gravelly gravitas to a Chrysler commercial or to half-heartedly spoof his own tactful reserve in an IBM spot, it's possible to forget that he was once the most enigmatic iconoclast in the musical world, his slippery identity impervious to both the prying inquiries of the press as well as the more innocuous curiosities of his fan base. But even 48 years after its release, and well into Dylan's current phase of relative transparency, D.A. Pennebaker's Don't Look Back retains something of a forbidden quality, a feeling that we shouldn't be privy to the things it shows us. Granted, it's precisely this intimate access that the behind-the-scenes documentary theoretically sells, but long before this particular kind of film congealed into a recognized genre, not to mention before label operations micromanaged artists to such an extent that anything approaching an “unfiltered” exchange between documentarian and celebrity was a logistical impossibility, Pennebaker was stealing private moments that the entire world was salivating for, but had no reasonable right to witnessing." Continued on at Slant Magazine, where I review the new Criterion Blu-Ray.
Posted by Carson Lund at 11:54 AM No comments: 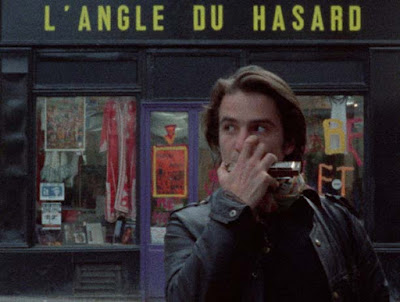 "In a hushed sequence in the penultimate installment where one character begins to explain the 'dangerous things' Colin has gotten himself into, Rivette discreetly reverses the dialogue track when it seems crucial revelations are on the horizon. The result is an unintelligible, uncanny garble (one imagines David Lynch had this effect on his mind when he conceived of the Red Room dialect in Twin Peaks) that singlehandedly puts to rest any and all expectations that this mounting mystery will be 'solved.' In doing so, Out 1 subtly pivots into a more reflective mode for its final hours, one that officially dissolves the concrete details into ciphers and red herrings and redirects attention to the sources of the anxieties driving them." Full review of this 13-hour behemoth, about which I was decidedly ambivalent, over at Slant Magazine.
Posted by Carson Lund at 2:23 PM No comments: