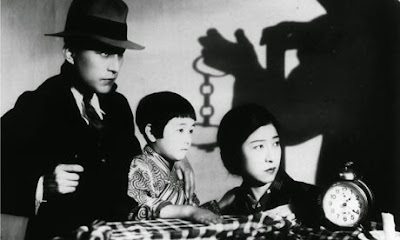 "In 1930's That Night's Wife, Walk Cheerfully and 1933's Dragnet Girl, Hollywood genre films in general stick out like product placement, albeit with an appreciative rather than mercenary function. It's a significant running detail, as Ozu's filmmaking in these early capers is unmistakably, spiritually indebted to American genre cinema without necessarily incorporating any specific references. Beyond their pulpy plots, which all more or less take the form of crime-doesn't-pay parables, there are visual flourishes that Ozu would largely dispose of as his career progressed." Reviewed a new Criterion Eclipse package of three silent Ozu films for Slant Magazine.
Posted by Carson Lund at 11:18 AM No comments: