An Evening with Sami van Ingen 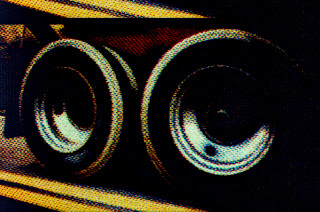 On the surface, the three films shown by the Balagan screening series on Monday, April 1st in Cambridge, Massachusetts to celebrate the work of Finnish artist Sami van Ingen – Texas Scramble (1996), Deep Six (2007), and Fokus (2004) – don’t seem to come from the same filmmaker. “We wanted to show some of the different sides of Sami’s work,” explained programmer Mariya Nikiforova when probed about the diversity of the screening. Her simple answer hinted at even further realms of variation within van Ingen’s twenty years’ worth of work unexplored by this particular program. Indeed, these three films alone embody lyrical, diaristic, self-reflexive, deconstructive, anthropological, personal documentary, and structuralist impulses.

Texas Scramble, the first film in the program, is the most conspicuous outlier of the three. The film opens with an onscreen text taken from Buddhist verse that proves the poetic guiding logic for van Ingen’s otherwise seemingly free-associative structure: “what we are today comes from our thoughts of yesterday/our present thoughts build our life of tomorrow/our life is the creation of our mind.” The quote hints at motifs of circularity, renewal, repetition, and memory, and van Ingen proceeds to build these ideas into the film’s fluid form, which behaves according to visual echoes, rhythmic matches (both sonic and pictorial), and subtle loops. Over the course of 21 minutes, a diegetic memory starts to set in. Camera movements, shadows, and reflections seem haunted by previous parallels, mirroring human memory and the phenomenon of déjà vu.

The psychological curiosity and frenetic movement (always suggesting the presence of a human behind the camera) of Texas Scramble is worlds apart from the naked formalism and clever self-reflexivity of Deep Six. Cannibalizing a sequence featuring a logging truck barreling down an empty highway in Sidney J. Furie’s 1998 action thriller The Rage, van Ingen displays an almost fetishistic interest in movement and speed for its own sake. The footage quickly sheds any trace of narrative baggage as van Ingen shifts the CinemaScope image out of alignment to reveal dark frame lines, approximating the effect of an old television set skipping out of proper calibration. Playfully, van Ingen uses a spacious format touted as the most complete viewing experience only to violently disrupt any sense of unabated immersion in the spectacle. In the end, this formal breakdown is tied to the fate of the truck, whose piles of timber come crashing out of the truck bed on a particularly narrow turn. 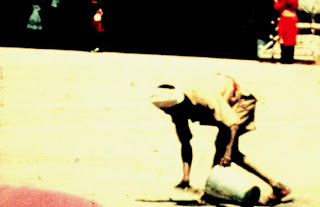 Fokus, the final film in the program as well as van Ingen’s most widely shown work, shares with Deep Six an interest in obsessively teasing out latent moods and ideas in previously existing material. In this case, van Ingen recycles fifty-year-old color footage taken by his grandmother at her wedding ceremony in India. Van Ingen was not yet born when these images were shot, but he did spend his youth in Southern India due to his father’s heritage, and as such the film represents an effort to parse deeper into his ancestral history and cultural inheritance. Using an optical printer, van Ingen enlarges and slows these images to put them under intense scrutiny. Sometimes this results in discoveries that could only be made under such careful viewing circumstances: wedding rituals and processions start to take on a level of absurdity, while hierarchies of power within the ceremony are pulled into sharp, unsettling focus. Other times, van Ingen defamiliarizes – if not completely obscures – these images beyond recognition so that they crumble into a mass of earthy, colorful film grain spreading like lava across the screen. Van Ingen’s rising-and-falling low-frequency drones further encourage the contemplative atmosphere.

It’s obvious that van Ingen’s an eclectic filmmaker capable of working expressively with a number of experimental approaches. Balagan’s recent program likely only scratches the surface of an oeuvre that hopefully contains further variations on the disparate textures, structures, and meditations presented here. Fokus and Deep Six share obvious technical affinities, but that is to say nothing of their differing thematic impulses (one being a formal exercise in spectacle and the projection apparatus and the other being an excursion into familial history) or the fact that they do little to shed light on a film as mysteriously intimate as Texas Scramble. Thanks to Balagan, at least we can get a glimpse of this Finnish talent’s cluster of interests.