Like Someone in Love (2012) A Film by Abbas Kiarostami 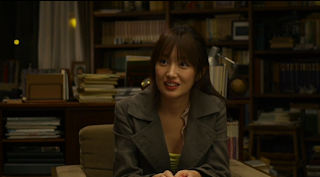 Not unlike Abbas Kiarostami's previous film, Certified Copy, the director's latest, Like Someone in Love, hinges on one character's casual misunderstanding of the identity of another. But where Certified Copy uses this slip-up as a way to plunge into an extended play of artifice, all the while moving deeper and deeper into a realm outside the "real," Like Someone in Love allows the repercussions of this act to percolate into an everyday setting. In this film's version of Tokyo, role-playing (conscious or unconscious) is part of the texture of life, not an elaborate self-reflexive game imposed upon the setting by the filmmaker. Yet while the two films are ostensibly after different things on the surface, they're flip sides of the same coin: the interrogation into the concept of representation in life and art teased out by Certified Copy lays the groundwork for Like Someone in Love's drama of subtly shifting characters forging increasingly melodramatic scenarios within their own quotidian routines.

To a large degree the film's thematic concerns and off-kilter mood are crystallized in its first shot, already a subject of repeat fascination for critics. What at first glance resembles a merely functional establishing shot of an upscale bar in Tokyo gradually reveals, through the shot's lengthy duration, its destabilizing geometry and startling absence of a specific human subject. There are plenty of people in the shot but close inspection proves that none of them are responsible for the intimately recorded female voice heard on the soundtrack, exclaiming of some partially revealed backstory of romantic frustration. The assumption, then, must be that this is a shot from the girl's perspective, but when a woman who has previously been jabbering on the right-hand side of the composition suddenly nudges her way into the foreground of the frame looking slightly to the right of the camera's gaze to start talking to this off-screen character, suspicions of POV are extinguished. The scene eventually settles into a relatively standard shot-reverse-shot setup, but this uncanny reordering of information throws us immediately off balance. Confusion over the source of our perception and the subject of our gaze, as well as over the very contours of the physical space, is a fitting foundation for this study of lives tossed askew by false impressions and vague resemblances.

The source of the mysterious offscreen voice is Akiko (Rin Takanashi), a female escort called upon by an anonymous member of her agency to keep a lonely retired professor named Takashi (Tadashi Okuno) company on this particular evening. Because her grandmother is temporarily in the city, Akiko tries her best to dodge the gig, but her boss shows little sympathy, arguing that an abbreviated visit would be worse than no visit at all. Akiko is frustrated by her boss's pushiness, and in a significant editorial gesture, Kiarostami holds on a reaction shot as her shouted rebuttal – heard rather than seen – stirs bar patrons from their conversations; order has momentarily been disrupted due to a breach of social cool. By showing only the roomful of people, Kiarostami emphasizes that the response to Akiko's fleeting breakdown of self-control holds more weight than the act itself. Throughout Like Someone in Love, such a seemingly minuscule violation of the uninterrupted flow of life is exactly what the characters try desperately to avoid. Revelations of truth, displays of vulnerability, and honest expressions of emotion are to be brushed under the rug. 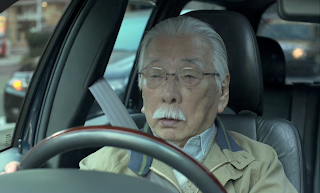 Feeling embarrassed about raising her voice, Akiko then gives in to the agency's callous exploitation. Thus, the drama ventures out of the bar and into a taxi – a familiar social arrangement in Kiarostami's world – where the film's most damning suppression of feeling takes place. In the process of listening back to progressively less hopeful voicemails scattered throughout the day from her grandmother, Akiko spots her waiting patiently beneath a public statue by the train station, the camera's angle just outside the window exposing the narrow but impervious barrier separating the two by no more than 50 yards. Akiko begins crying. She asks her driver to circle the block a second time. She looks away. The car continues on. It's a devastating moment that permeates the remainder of the film with a sharp feeling of loss, coming about as close to outright melodrama as Kiarostami will go.

The fluid choreography between public and private personas established by this dense opening act is taken a step further by the subsequent progressions of the narrative. When Akiko arrives at her destination after a nap, a long shot from her client's window shows her sandwiched between satin shades emerging from her taxi exhausted and distraught, fixing her hair and gathering her things for her upcoming job. Moments later, she is invited into the man's room with a smile on her face, looking dazzling and alert. She has shifted from a private to a public self, and one wonders to what extent her role-play is conscious or merely an unconscious routine underwent for the sake of professionalism. Regardless, the moment before registers as a brief emergence of Akiko's authentic self compromised by the fact that, unbeknownst to her, she was being watched. Like Someone in Love presents an urban space of constant social surveillance where any disruption to a given façade is bound to be noticed.

It is because of this partly paranoid, partly hereditary understanding that the film's characters engage in the experience of fantasy. Akiko and Takashi's sojourn together can be understood as such; in a contrived relationship that variably resembles that of a grandfather and granddaughter, a father and daughter, a husband and wife, and a prostitute and her client, the two sit down for amiable small talk, Takashi offers a special meal, and Akiko tucks herself into bed for the night, doling out half-hearted erotic permissions from beneath the covers. During Takashi's overzealous build-up to dinner, he throws on the titular Ella Fitzgerald song, whose lethargic rhythms and romantic melodies manage the rare blocking out of the outdoor traffic noises that otherwise insistently govern the film's soundtrack as a reminder of an external world both threatening and unavoidable. In this instance, both characters have fundamentally succumb to fantasy, to the artificial realm arguably occupied by Juliette Binoche and William Shimell for the majority of Certified Copy's back end. 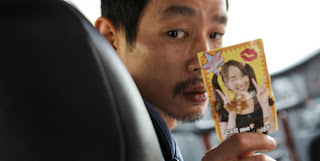 Atop this already awkward relationship a third character is added: Noriaki (Ryo Kase), Akiko's anxious, suspicious fiancé, the man bitterly referred to in the offscreen phone call that opens the film. Noriaki's first appearance onscreen, forming an imposing road block on Akiko's path to her sociology class, does little to correct the negative impression already collected around him, but soon he approaches Takashi, practically invites himself into the car, and exposes a gentler side. Assuming Takashi is the husband to Akiko's visiting grandmother, Noriaki pleads for the grandfather's informal marriage vows and Takashi complies with the role, if not the request. When Akiko returns, she is silently caught off guard but the convenient role-play continues; all of a sudden the three of them resemble a lopsided family. Still, this newfound unity is marked by superficiality. In the car, Noriaki (Ryo Kase) shows Akiko a crumpled postcard advertising another young call girl he thinks looks like her, echoing an earlier moment when Takashi claims a likeness between Akiko and the subject of an oil painting on his wall. (Both instances speak humorously to the considerable differences in each man's toolbox of cultural reference points.) These reductions of the particular to the general, of the personal to the iconic, emerge as ways to avoid facing up to reality. They are part of the larger social deceit that these characters perpetuate.

Like Someone in Love marks Kiarostami's second fictional filmmaking venture outside his native Iran, and the film's Japanese setting makes his characteristically withholding, unobtrusive tactics look especially Ozu-like. But there's a deeper reasoning as well behind the director's choice of Tokyo. For a study of fractured social identities, Kiarostami has picked a culture that is steeped in formalities and standardized behavior. Every time Takashi enters his apartment, the film’s fluid rhythm is momentarily stalled for the small quotidian gesture of taking off his shoes and donning slippers. At one point, Takashi relates to Akiko by asking about her hometown, noting upon hearing her answer that it explains some of her mannerisms. In this film, characters must act in accordance with these inherited identities or else risk ruffling the orderly surface of society. Ironically, however, these acts of fitting into an expected model of behavior pile up until Akiko and Takashi no longer emanate individual cores of identity and become mere wisps of narrative abstraction. On the contrary, Noriaki, allowing a barely concealed jealousy to balloon into impassioned anger by the end of the film, becomes increasingly and disconcertingly palpable.

As is typical of Kiarostami's wise approach, the film neither bemoans the ontological issues it raises nor celebrates the anarchic polar opposite, which of course is embodied by the maniacal Noriaki. Instead, it expresses a profound solitude for the state of social affairs, a viewpoint manifested by a strange non-sequitur in the film's final act. When Akiko is waiting on Takashi's steps for the old man to return, yet another offscreen female voice emerges, this time speaking according to a distinctly different, more expressive acting style. At the end of the woman's speech, which lucidly tells of fond memories, unforgettable experiences, and hitherto suppressed feelings, Kiarostami finally reveals the source of the voice: an elderly woman speaking from within the space of a tiny window framed outside by a larger doorway. In this urban environment, a genuine display of emotion such as this – or such as Noriaki's startling last-minute expression of rage – is equated with either isolating oneself from the world peacefully or existing within it and causing chaos.