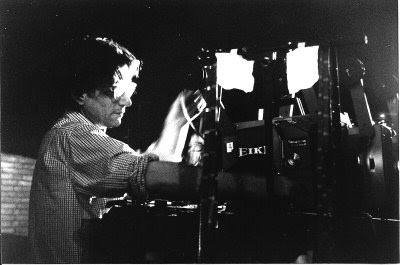 The projector performances of Bruce McClure have ever so gradually spawned a cultish reputation in avant-garde circles, their intense and in-your-face qualities demanding the attention of adventurous filmgoers. Perhaps the major reason why McClure has not quite become a leading fixture with this niche audience though is the fact that his work is fundamentally ephemeral. Limited to late-evening spectacles shown once and never repeated in quite the same manner, his improvisational audiovisual experiences defy the act of preservation in any form, and, given their intermittent strobing effects, any attempt at digital capture is destined to either fail or inadequately represent the woozy ambiance the performances impart on their audiences. The thrill of McClure's work comes precisely from its existence in a dark room amongst various bemused, hypnotized, and enraged viewers, as well as from the sense of it having no pre-destined plan other than what McClure happens to concoct for you in the center of the room.

McClure was at the Brattle Theatre in Cambridge, Massachusetts on April 10th, a quaint old arthouse that is probably not the ideal venue for his setup: two studio speakers (meant to belt out pummeling industrial soundscapes), a fairly puny six-by-eight projector screen propped up invasively in front of the much larger house screen behind it, and a table strewn awkwardly atop theater seats in the middle of the room upon which two projectors, a tangle of XLR cables, and an assembly line of guitar delay pedals. It's an arrangement that looks gentle and friendly at first, as if for a home movie gathering; that is, before McClure starts building towards a feverish strobing of light and an aggressive layering of harsh, dense electronic tones. At the peak of the mesmerizing chaos, it's easy to wonder how such a forceful sensory overload can emanate from such a delicate-looking apparatus. Part of McClure's ongoing reputation is to go against the grain of every venue he enters, be it movie theater, studio, or museum; pretty much no space can contain the shuttering racket he creates.

The show began with flashes of amorphous shapes against black leader as a dry, harsh crackle resembling the sound of dribbled basketballs bit-crushed and thrown through distortion poked hesitantly through the silence of the room. At this point, the house lights were still on, but when McClure started to apply reverb and looping effects to his crunchy soundtrack, the theater slowly went dark. It's the first gesture that aligns McClure with the structuralists, a way of staging the theater space itself as the inside of a camera. Suddenly, the room is dark and the screen is the world beyond the shutter hole, flickering with light and imperceptible forms. Together, the visuals and the audio stray from any semblance of shape and definition, until the screen is a mere blob of featureless light strobing in and out and the speakers deliver an enveloping drone. McClure riffed on this blueprint for about an hour once it developed, subtly altering the image and soundtrack throughout with his pedal system. Sometimes, the brightest point of the screen was blinding, other times very faint. Similarly, the sound ranged from blistering and high-pitched to strangely lulling. Between the two, the audio is more active, contrasting with the blankness of the image.

A curious dialogue between sound and image developed during McClure's performance. Menacing patterns in the soundtrack appeared to tease out ghostly images in the void of the screen, while persistent attention to the strobing produced a euphoria that caused potentially non-existent sounds to surface in the mix. The result of this fascinating interplay is that no viewer experiences McClure's work in quite the same way; one may interpret his performances as abrasive and violent while others may feel soothed by the experience. I found myself vacillating between these two poles, discovering organic forms in the chaos of the screen at some points and feeling pummeled by the loudness other times. For all the seeming redundancy of the performance, McClure does manage to conjure up a surprising variety of emotional responses.
Posted by Carson Lund at 4:27 PM