David Lynch's first venture into motion pictures came with his entry into a Philadelphia art and sculpture contest, Six Men Getting Sick, also entitled Six Figures Getting Sick, or Six Men Getting Sick (Six Times). Each mildly altered title works as well as the next with the self-explanatory yet elusive short film loop, a one minute ouroboros involving six crudely drawn, hairless heads vomiting, distending the pipe-like organs leading to their hearts, and displaying grief over their physical states. As much as this appears to make up the material content however, it is difficult to state as fact what exactly does happen, or what its purpose is. It's certainly not a self-reflective piece for Lynch, as he seems to have had little discernible physical or emotional torment during the time of its making. Rather, it's simply the first stirrings of Lynch's penchant for warped, dour artistic content, and certainly foreshadows the kind of personal anguish experienced by the leading boy in The Grandmother, or Henry in Eraserhead. On a purely technical level, the film is something of an achievement, likely the reason for its eventual first prize at the contest. Lynch's illustrations are organic and bizarre, with lines that branch off in directions that seem at once fluid and unnatural. The burnished edges of the frame, the general rawness of the splattered white "blood", and the irritating police siren that repeats on the soundtrack also add to an unusually discomforting atmosphere that mounts and grates as the film loop persists, perhaps approximating the terrible physical derailment involved with sickness.

The Alphabet shows Lynch keeping with the disturbing, coarse style of Six Men Getting Sick, this time expanding on a story his wife Peggy told him about her niece reciting the alphabet whilst sleeping. In doing so, Lynch probably wasn't presenting himself as a good uncle figure. The animation/16mm mix becomes a terrifying fever dream, sure to evoke even worse dreams out of a young child than what was likely the case. In it, letters come alive, jittering around the frame with ugly energy, periodically bursting, shrinking, or bleeding like the heads in Lynch's debut. The animated frame transforms into the landscape of his niece's dream, pulsing with ever-growing cloud-like formations and dark edges. This is interchanged with footage of various parts of a woman's face - made up like Isabella Rossellini's character in Blue Velvet - as she whispers unsettling phrases, a minimalistic black and white animation with echoes of PacMan, and images of a reeling girl on her bed in what looks like a cavernous, dark abyss of a room. Once again, Lynch makes unconventional use of sound. Grating cracks, hisses, and whines emanate from the soundtrack, matched seemingly without motivation to the events onscreen. For instance, what sounds like a dying bird pairs up with the animation of a white ball ascending up a black corridor. This utterly irrational aural manipulation recalls the works of Alejandro Jodorowsky, and through it Lynch finds the perfect madness of nightmares. 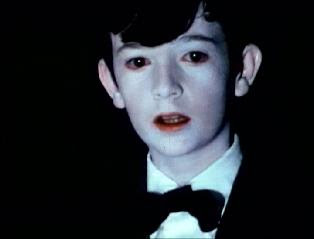 Lynch's ability to shock and disquiet with his early style reached its zenith with 1970's American Film Institute-funded The Grandmother, yet another oddball mixture of animation and live action. The film was his longest piece yet at 34 minutes, and also his most dense, despite being wordless. Shot in a chiaroscuro gloom, it follows the experiences of a young boy in a black suit living in a Gothic, shadowy home with his two subhuman parents. In an attempt to shake himself loose from the stranglehold of his torrid, barking mother and father (a hyperbolic expression of poor parenting), he retreats to his bedroom, finds a bag of seeds, and plants what turns out to be a grandmother on his bed. This is Lynch's bizarre reworking of the age-old neglected child story, as well as his rebirth of the tree of life symbol; instead of using a tree as a marker for hope, out sprouts a grandmother who acts as the tender, motherly guidance the young boy lacks (his name appears to be Matt if the parent's slightly distinguishable growls do anything to indicate). The boy lives in a world that is quite literally black and white, rife with moral ambiguity and festering with unpleasant living conditions.

Of the three works that comprise Lynch's pre-feature-length career, The Grandmother does the best to anticipate things to come, or at least its immediate father, Eraserhead. The atmosphere of the film closely resembles that of Eraserhead, with its grid of ominous domestic settings, predominance of black screen space, presence of the organic amidst the orderly (the pile of dirt on the bed and subsequent appearance of the slimy grandmother recalling Henry's apartment with the alien baby and the ubiquity of plants), and use of sullen organ music. (Here though, the organ shifts variably from minor to major, usually providing an ironic counterpoint to the action.) It's also tempting to read the young boy as the childhood image of Henry himself; surely, the beating he takes from his parents could have resulted in a future fear of parenthood. As the film progresses, it becomes increasingly revolting, presenting a series of spooky images that seem to have been created with the intention of sticking involuntarily in the mind of the viewer. Figures twitch with inhuman convolution, and so too does the camera at times, resulting in an eerie allegory that can't help but turn eyes and ears away.

Were it not for the young boy's unintentional discovery of tenderness in The Grandmother, Lynch's early works are almost entirely without humanity. As experiments however, they boast a termite-like ability (in the Farber sense) to dispose of and regenerate a wealth of creative aesthetic ideas. Lynch also displays for the first time his spectacular gift of forging unexplainable moods out of limited means, which in a way paves the way for his most recent film, Inland Empire. The three films undeniably provide a glance at the primitive stages of Lynch's artistry.
Posted by Carson Lund at 11:01 AM

Off to a great start, Carson! And since I haven't seen any of these, your insights are much appreciated. Doesn't look like any of them are available through Netflix though. Well, I have other avenues. :)