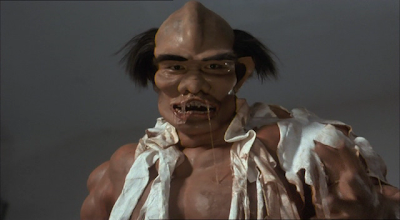 Today in mainstream, lowbrow action films, movement and viscera comes and goes at a fast pace, and blood and guts often follow in synchronicity. When a character reaches for his gun in a dark alley, he is bound to shoot. When a simmering femme fatale puts a knife to the throat of a fraudulent punk, she will most likely either slash his neck open or at least give it in a pinprick as a warning. But what often exists in these encounters is a dangerous sense that the actors don't have any dedication to their malign roles. Moreover, the construction of such scenes involve all the rigor and creativity of a chore. The directors behind the work have a predetermined idea of where they want to take their action aesthetically and narratively, so when fight scene after fight scene slips by on the screen, it seems as if they are merely getting on with it, creating the scenes for productivity's sake.

Such insistence upon proficiency and reliance upon tried-and-true technique is wholeheartedly absent from the Hong-Kong manga-inspired flick, Riki-Oh: The Story of Ricky, a popcorn movie that is so gleeful in its bad taste and its joyous maximalism that it becomes viscerally draining in its own way. The film involves something about an excessively hostile prison, an imprisoned flutist named Ricky with superhuman strength, a "gang of four", which are the four outrageously subhuman masters of each prison sect, a romance between Ricky and his girlfriend, the vengeance of whom got him into jail in the first place, and oppressive authorities. Any attempt that the film makes at a statement on the abusive, corruptive nature of authority however, is ultimately undermined by the sheer absurdity on display. The story is so inconsequential, the characters so shred-thin, the scenarios so unbelievable, that any encapsulation of the plot remains entirely unnecessary. I still cannot, for the life of me, decide why a fat, greedy little boy shows up at the prison in the end with his domineering father to egg on all matters of violence and obsessive torture, and, echoing some ludicrous back-story that occurs offscreen, frighten the larger, more threatening inmates with his mere presence.

What makes Riki-Oh such a hoot to watch is the gung-ho attitude on the part of the filmmaker, Ngai Kai Lam, that permits him to obey this credo: "if it's shown fast enough, maybe people will believe it." Of course, this is never the case, and as a result we can identify the clearly discernible tin foil - meant to stand in for an iron door - that Ricky jumps through, the ridiculously doctored facial grotesqueries when someone's skin is slashed off, or the obtuse physical movements during fight scenes that don't, by any stretch of the imagination, seem practical. Every time Ricky punches an opponent, he tears clean through their bodies. In an act of desperation, one of his adversaries unravels his own large intestines to strangle Ricky. When all is said and done though, Ricky's outlandish physical strength is too much for his opponents. But simultaneously, via sporadic inner monologues and flashbacks that come so infrequently that they cease to be devices at all, we see that Ricky is really a gentle human being, resolute in his fight for justice. This is all narrative hogwash, but Ngai truly believes in it, and what he brings to the assembly line of blood and guts is not determined professionalism, but rather enthusiastic amateurism that delights in every second of fantastic cinematic realization.
Posted by Carson Lund at 7:01 PM

Interesting choice of film for review - THANK YOU for doing it though, I can never get enough of people talking about Riki-Oh. Easily one of the funniest films ever made, bar none.

"This is all narrative hogwash, but Kai Lam truly believes in it, and what he brings to the assembly line of blood and guts is not determined professionalism, but rather enthusiastic amateurism that delights in every second of fantastic cinematic realization."

Enthusiasm is the word, definitely. You really can't believe what's going on in front of your eyes but it still is entertaining as all hell. I've always felt that there's something really charming about its totally unnecessary existence. (And that's a compliment.)

Thanks a lot Daniel. I was beginning to wonder if anyone has even seen Riki-Oh besides my friends and I. My favorite scene has to be the dog being kicked illogically.

best movie ever. We had a coworker talking about it for about a year before watching it, and all the time we thought he was making it up. And then we found an vhs copy (this was before downloading movies from the internet) and it was all there: the bullets... the training breaking tobmstones... the intestines... the tendons tying... And it was all completely serious.