Dennis Cozzalio of Sergio Leone and the Infield Fly Rule has recently created a great quiz regarding movies. I thought I'd join in, so here are my on-the-fly answers to the 38 questions, although there were many I could not answer due to a lack of familiarity with the subject.

2) Most significant/important/interesting trend in movies over the past decade, for good or evil.
The trend which is loosely, and somewhat shamefully, entitled "contemplative cinema": European and Asian slow-burners that favor quiet observation of the world to the bombastic debauchery of most contemporary media. Bela Tarr, Tsai Ming-Liang, Hou Hsiao-Hsein, and Abbas Kiarostami are the big names.

6) Has the hand-held shaky-cam directorial style become a visual cliché?
Most certainly. I cringe when I hear people vaguely describing a film as interesting mainly because it had "realistic" cinematography. This is not to say that the style has ceased to be necessary, as it often times is applied with great results.

7) What was the first foreign-language film you ever saw?
Albert Lamorisse's The Red Balloon, a delightful film I saw as a child which is actually almost completely dialogue-free if I remember accurately. 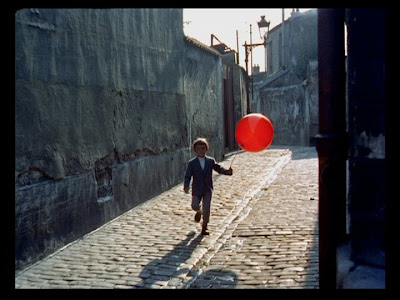 9) Favorite World War II drama (1950-1970).
For now, the film that immediately springs to mind is Tarkovsky's Ivan's Childhood (1962), even though it's less of a drama and more of an elliptical, dreamy exploration of wartime's negative effects. Also, although it does not fall within the allotted time frame of 1950-1970, I am insistent upon mentioning the tremendously moving Japanese animation, Grave of the Fireflies (1988), even though it too is an anti-war film.

11) Who or whatever is to blame, name an irresponsible moment in cinema.
The fact that the outlandish, absurd, unbelievable plot of Michael Bay's Armageddon (1998) ever made it to the big screen.

12) Best Film of 1969.
Ahh, a great year for cinema. Tarkovsky's Andrei Rublev is the most sprawling achievement in my mind, but who can deny how grateful the film community must have been to experience Woody Allen's directorial debut, Take the Money and Run?

15) What is your favorite independent outlet for reading about movies, either online or in print?
The British Film Institute's magazine Sight and Sound is always informative and enlightening. Online, Ed Howard of Only the Cinema provides some of the most fascinating, long-winded discussions of films I have ever had the pleasure of reading. Also, Dan Jardine of Cinemania brings a witty, irreverent, stream-of-consciousness prose to some thoroughly engaging material.

19) Best use of high-definition video on the big screen to date.
David Lynch's Inland Empire (2006) and Nuri Bilge-Ceylan's Three Monkeys (2008).

20) Favorite movie that is equal parts genre film and a deconstruction or consideration of that same genre.
With David Lynch on the mind so much lately, his TV series Twin Peaks seems a great example, as an explosive dissection of the television soap drama.

21) Best Film of 1979.
Once again, I must hand Tarkovsky the top prize for Stalker, although Herzog's version of Nosferatu the Vampyre was outstanding.

22) Most realistic and/or sincere depiction of small-town life in the movies.
Charles Burnett's Killer of Sheep (1977).

23) Best horror movie creature (non-giant division).
That wretched old homeless man behind the diner in Mulholland Drive (2001), or Samara from The Ring (2002), who somehow makes a terrible film legitimately creepy.

25) Name a one-off movie that could have produced a franchise you would have wanted to see.
I'm having trouble thinking of one situation where a film could have possibly benefited from a sequel.

27) Favorite moment in three-strip Technicolor.
The brief sequence in Godard's Contempt when the man shoots an arrow across the schematically painted walls.

28) Favorite Alan Smithee film. (Thanks, Peter!)
I have never heard of this man.

30) Best post-Crimes and Misdemeanors Woody Allen film.
I have not seen enough to answer comfortably. After all, Woody makes about a film a year.

32) Favorite movie tag line.
No one should care about these.

34) Overall, the author best served by movie adaptations of her or his work.
Kōbō Abe and László Krasznahorkai, whom Hiroshi Teshigahara and Bela Tarr, respectively, work in sacred sync with.

36) Favorite musical cameo in a non-musical movie.
Vali Kerekes as the bar singer in Bela Tarr's Damnation (1987), Rebekah Del Rio in the "club silencio" sequence of Mulholland Drive (2001), and the (Mongolian?) flutist in Guy Maddin's Saddest Music in the World, although some may consider this film a musical, no matter how bizarre.

37) Bruno (the character, if you haven’t seen the movie, or the film, if you have): subversive satire or purveyor of stereotyping?
I'd say both, but above all else, he is a hilarious entertainer.