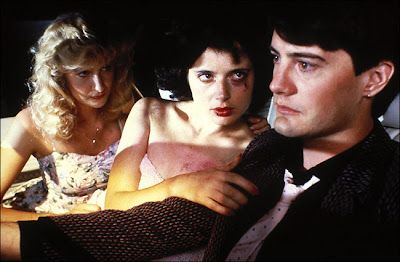 David Lynch's first three features, albeit sharing several elements, were each distinctly singular films. They were made under different circumstances, with Lynch's motivations shifting spontaneously from artistic inner sources to oppressive external forces. It was not until Blue Velvet that Lynch would start hitting a stride of consistency, not only in terms of production but in the tone of his work, a streak that remains alive today. With Blue Velvet, Lynch began looking in at America rather than simply making films that are set in America. Utilizing a touch that seems both personally inflected and artificially calculated, he establishes a hygienic small town rife with clichés - red roses and green lawns set against romantic royal blue skies, policemen waving as they ride down the street, little children playing in their yards - only to implant it with the bizarre, hyperreal dreamscape of his imagination. This is the first time Lynch weaves this specific trick, and it is something we still see in his most recent films: the penchant for genre-busting. For the first ten minutes or so of the film, everything tells us we are viewing an average small town mystery. Lynch hits all the right notes, right down to the naming of the characters (the angelic blond high-school girl as Sandy (Laura Dern, with shades of Laura Palmer), her football star boyfriend Mike) and the nowhere-but-anywhere feel of the microcosmic American suburb. Then a disembodied human ear is found in a field.

Jeffrey Beaumont, played by Kyle Maclachlan in a role that seems a tryout for his subsequent turn as Cooper in Twin Peaks, is the innocent young claimant of this ear. He takes it to the police but is told to remove himself from involvement. Jeffrey becomes uncontrollably suspicious, determined to fill in more pieces to the puzzle he began. He enlists the Police Investigator's daughter Sandy, who shows interest as well but not to the degree that he does. Despite this, she stays by his side throughout the proceedings, simultaneously out of a perverse curiosity regarding the expanding mystery but perhaps more so out of a fascination she has with Jeffrey, even to the dismay of her boyfriend. Jeffrey's courageous investigation leads him into the foreboding apartment of the femme-fatale, Dorothy Vallens (Isabella Rossellini), a local night club singer who croons night after night the alluring Doo-Wop single, "Blue Velvet", which comes to be the primary visual and aural motif of the film. Dorothy is mixed up with a gang of evil, mysterious men whom Jeffrey witnesses firsthand.

Such a plot sounds prime for some old-fashioned, conventional sentimentalizing. This is what Lynch wants. When Sandy asks Jeffrey "You like mysteries that much, don't you?" after he reports to her a whole bunch of tomfoolery, she could just as well be asking Lynch the same question. He likes them so much that he's willing to ride a thin line between self-parodying schmaltz and the dichotomous, sinister world he forges. Scenes involving a pirouetting camera as Jeffrey and Sandy kiss at a party, or when Jeffrey picks up Sandy in his shiny red sports car from school, a swarm of impressionable girls staring wide-eyed at him, are supposed to clash heavily with the dark material in the film. Dennis Hopper's portrayal of Frank Booth, a maniacal, unpredictable, sadistic sexaholic, is the embodiment of the sheer gravity of Lynch's willingness to take us to the shocking extremes of his chosen genre. The first time Jeffrey sneaks into Dorothy's apartment, he witnesses from her tinted closet Frank as he has his way with the submissive Dorothy, sucking violently on a hospital mask and screaming at her to not look at him. His eventual discovery of Jeffrey, whom he hitherto deems "neighbor", sends the film into its most Lynchian territory, via a "joy ride" to hell that recalls the transformative use of open road in Lost Highway. In Blue Velvet though, it's a matter of transitioning between genres rather than realities. Several of Frank's pawns encircle Jeffrey, whispering confusingly unfinished inside jokes to him while more Elvis-like music reverberates in the background, a scenario that exemplifies Lynch's use of obscure comedy.

Another line that Jeffrey and Sandy habitually fall back on is "it's a strange world, isn't it?". The main problem with the film is that it is sometimes difficult to tell whether Lynch's philosophy is actually any deeper than these words, spoken out of the naive mouths of simple folk. The first time I saw the film, I was suspicious of this, a phenomenon Ben Livant hits on the head in an article over at Cinemania: "All of the seedy stuff is merely juxtaposed against the red fire engine with the dalmatian dog, not really intertwined, stapled together for the fun of making a Siamese twin out of a dichotomy, not dialectically related to create a new thing of value." The perfection juxtaposed with the degeneracy seemed too convenient, too easy. Upon second viewing, I found that the pull of the surface pleasures was too strong to worry about this flaw. Granted, Lynch's application of genre tropes has become more refined as his career has progressed. Blue Velvet stands as his initial juggling of this concept, and it is an oddly compelling piece of work indeed, with a memorable atmosphere and cast.
Posted by Carson Lund at 9:03 PM