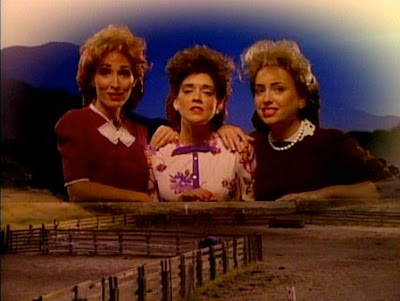 The Cowboy and the Frenchmen is an absurd, tongue-in-cheek short made by David Lynch as part of a television program called The French as Seen By..., which otherwise included shorts by Jean Luc-Godard, Werner Herzog, and Andrzej Wajda, among others. The film is probably the least intellectually demanding Lynch has ever been, but this is not necessarily a bad thing. It takes place on the range where a troupe of cowboys (Henry Dean Stanton, Jack Nance, Tracey Walter) spontaneously witness a Frenchman skidding down the mountainside nearby. They are unsure of who or what it is at first, Stanton's character "Slim" continually exclaiming "What the hell is that thing?", but their xenophobia eventually wears off when they begin searching his suitcase, unearthing baguettes, romantic pictures, french fries (of course, Lynch can't deny this joke), and all other matters of stereotypical French paraphernalia. The Frenchman's overall excitement towards America, specifically citing the Empire State Building, unites him with the cowboys for a night of galavanting around the stables, singing "home on the range" campfire style, and hitting it off with a few local gals.

Ultimately, the film becomes a no-holds-barred joke. Every chance Lynch gets, he hyperbolizes the already mindless caricatures; the Frenchman, with his beret, suit, and mustachio, does little more than stare like a puppy dog at his surroundings and swoon romantically to the tune of his journal, the cowboys shoot birds and snakes uncontrollably and repeat their orders dumbfounded, and the women wear high jeans while serving the men food or offering them someone to sleep next to. Lynch has a way of drawing his character's gestures out so that they become awkward or unnatural, and thus humorous. What really gives the film its goofiness though is the deliberately stodgy aesthetic. The video quality looks several notches below professional. Clumsy superimpositions, iris effects, and stagey dance sequences are all put to good use. An amusingly simplistic honky-tonk score fills out nearly every one of the twenty-six minutes. There is even a motherly shot of three woman harmonizing quick ditties over the landscape which is repeated frequently throughout the film. I wouldn't say The Cowboy and the Frenchman holds an important notch in Lynch's resume, but it at least stands as a testament to the variety of his material. You'll only walk away from it knowing one more thing: this is apparently the French as seen by David Lynch.
Posted by Carson Lund at 9:07 PM