Alexandra (2008) A Film by Aleksandr Sokurov

Of the three films I have seen by the acclaimed Russian director Aleksandr Sokurov, his latest, Alexandra, is without a doubt the most masterfully orchestrated, an eloquent juxtaposition of wartime desolation and maternal compassion set at a Russian army outpost in Grozny, Chechnya. It details the arrival and eventual departure of a young captain's grandmother, Alexandra, who pays the unexpected visit to the 132-degree landscape to reconnect with her grandson Denis whom she hasn't seen in seven years. Their meeting, in keeping in line with Sokurov's continuing evocation of familial dynamics as passionate and quasi-erotic, is marked by great tenderness, the busy occupational killer completely, and surprisingly, enthusiastic and accommodating towards his grandmother's presence. So too are the rest of the wandering soldiers at the camp, individuals who are just as much the focus of the film as Alexandra and Denis. As the film progresses devoid of any oppressive authoritative figures, Sokurov peels away the soldiers' manifest toughness to reveal their boyish qualities and, most significantly, their muted, internalized appreciation for the contradictory motherly figure who roams between the barracks exhaustively but with command, acting as a cautionary symbol for "Mother Russia".

Alexandra, inevitably, has more to do with politics and patriotism than most of Sokurov's work, but at the same time it seems restless in its pursuit to avoid polemic. A contradiction, yes, but the film is subtly loaded with them. Case in point: the lack of bloodshed or violence. It's rare that a film centering around war does not include at least one gunshot, unless one counts Alexandra's shooting of a blank during her brief tutorial with Denis in a sweltering, claustrophobic tank. Through Sokurov's remarkably tactile approach of using detailed close-ups and heightened sound design, guns merely become emblems of hostility, rashness, and unnecessary violence, not weapons. Moreover, the relentless grind of the army camp - the forthright hum of the tanks, the collective clicking of guns, helmets, and boots - extends this quiet metaphor. At one point immediately following a scene depicting two soldiers as they discover Alexandra and watch over her for a few minutes, we are shown a lovely distant shot of a flaming hill at dusk. There is no implication of who witnesses this image, so how better to assign its meaning than as an abrupt reminder on the director's part of how far away he wants to keep the usual episodes of violence and terror that normally staple themselves onto a "war film".

The film is instead rife with love and humanity, and Galina Vishnevskaya's evocative, unobtrusive expressions are immediate proof. Vishnevskaya is already a Russian cultural icon as an opera maestro, and Sokurov's previous documentary, Elegy of Life: Rostropovich, Vishnevskaya, respectfully places her and her cellist husband as subject. She has dabbled with dramatic arts invariably, but that in no way limits her obvious power here as a screen presence. Although her physical body is weary and burnt out, evidenced by her repetition of the line "it's stifling", or "i want to sit down", she claims that her soul can survive another lifetime. This presents itself as another contradiction: wiseness and pride placed aside physical deterioration. Her hair is gray and knotty (we see this intimately when Denis braids it), her skin wrinkled and thin, but her intellectual and moral strength bursts through. No wonder the elderly face is often said to carry the weight of history in it, because Alexandra manages to let every wrinkle communicate. Vishnevskaya herself lived through the blockade of Leningrad and subsequent years of tumultuous Russian history. This inconspicuously makes itself apparent; Alexandra expresses her deeply held beliefs about the futility of war and the importance of family with near impatience and disgust, but she never becomes bludgeoning. 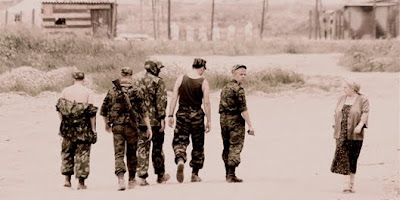 One of the interesting elements of Alexandra is its simultaneous sensuality and mundanity. In setting the film amidst the ruins of Grozny, Sokurov casts real Chechen locals in some scenes, such as when Alexandra peruses a dusty marketplace and meets an elderly vender who invites her into her apartment for tea, or when she is lead back to the barracks by a young Chechen boy who shamelessly asks her to free his people as if she's some prophet from a faraway land. The camera is unassertive but eloquently observant of the locals, giving the film an almost ethnographic scrutiny. All of this lends a cinéma vérité quality that contrasts the vaguely dreamy atmosphere that Sokurov has honed in his career. Aleksandr Burov's cinematography, which brought a similar look to Father and Son, relishes in desaturating the milieu, giving it a measly spectrum of khaki brown and green, and while it lacks the fuzzy porousness of Father and Son's images, it nonetheless creates something that is otherworldly. The languorous camerawork, unconventional editing, punctuated acting, and hypnotically tangible soundtrack also add to Alexandra's sobering remoteness.

Free of the sort of portentous dialogue that often peppers Sokurov's films and detracts from their purely visual moods, Alexandra is consequently his most accessible and consistent work. Sokurov is at his best when he refrains from saying too much literally, which I think is what differentiates his latest from something like Father and Son, specifically. The film is less of a story than a nondescript slice-of-life, a distilled situation given exacting attention in order to extract its peculiar significance. It's an oddly lilting and indirect anti-war film, and this is likely Sokurov's real achievement.
Posted by Carson Lund at 9:15 PM

wow it sounds totally great. I've never heard of the film, or the filmmaker. great find.

I'm glad my review persuaded you to see it. Sokurov's an international master, but it can be quite difficult to obtain his work.