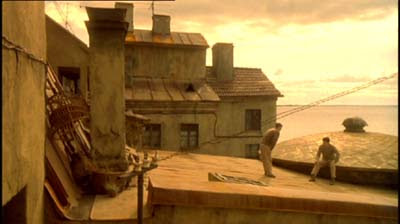 In art film, Russian director Aleksandr Sokurov is an island. Although similarly contemplative to current Asian directors like Hou Hsiao-hsien, he has the clairvoyance of a wise historian crumbling to dust on his final days. Just when one believes that they have seen the most furtive celluloid oddities available (such as myself), Sokurov drops another one of his nostalgic tedium bombs. The films he creates feel like they have fallen from cinema heaven, yet in some nook that was never ventured to by other deceased films. Russian Ark flabbergasted me with its technical feat - one that I can't say has ever been accomplished to such an awe inspiring level and therefore earned an otherworldly quality - and now Father and Son has simply puzzled and discomforted me with the elliptical dream world that is presented.

While not jointed enough to be considered narrative cinema and with too much dialogue, music, and camera involvement to be pegged as minimalism, Sokurov's second addition to a trilogy about family evokes, as the title states, a tender father/son relationship. The opening sequence invites us suffocatingly into masculine body contact, an introduction that is sure to nauseate most audiences of the Western world. I wasn't necessarily turned off by this scene, in which the father is perhaps comforting the son who is telling him of a dream, but it certainly had me prepared for an oedipal homoerotic plot. It turns out this is nowhere close to Sokurov's intentions. Like many acknowledged philosophers and artists have sanctioned, he sees love as a universal, even spiritual event that transcends the societal trappings of gender and age. The son Aleksei is a military student living with his father in an angelic apartment where the rooftops are akin to front yards. He has a girlfriend and is interested in his increasingly present masculinity, but the film's attention is solely spent on the holy relationship between parent and child.

Their age gap is meager, causing Sokurov to prod their congruous souls through lingering close-ups. An aura of light is reflected off them and their surroundings throughout the film's entirety, and they seem as likely to vanish into thin air as the clouds in the sky that wisp away to muted blue nothingness. Similarly dreamy are the few wide shots in the film, which are shot with an anamorphic lens to generate dimensionally contorted imagery that will have viewers searching for a remote to correct the picture settings on the television set (i know i did). Father and Son contains very few establishing shots, and it is precisely this setting ambiguity that I have found to be at the heart of Sokurov's films. The father and son appear to live in a dream where only their faces and immediate surroundings are perceivable. As for Russian Ark, despite the fact that it was set in the vast hallways of the Hermitage, there is never an inkling as to what is around this museum. The denizens and locations of Sokurov's films function in a space that is absent of any time periods, or even worldly relations for that matter.

Despite all this spiritual presence however I feel that Father and Son is a tad too spasmodic. Sokurov doesn't ever prioritize one specific image or devise one specific rhythm. The conversations between the father and son are rather illogical and forgettable, and the slight narrative offers up one too many diversions, winding up unsatisfying. Instead there is only one thing to do: dream and soak up the atmosphere, which is magical. However, for all I know, Sokurov is yet another filmmaker whose greatness is difficult to catch.
Posted by Carson Lund at 3:17 PM