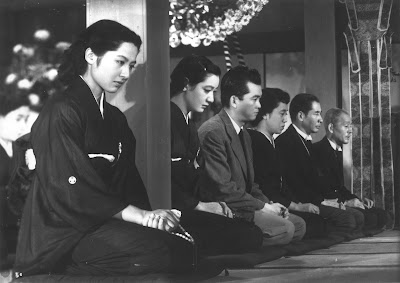 In a Yasujiro Ozu film, there comes a breath of fresh air towards the final act, some stroke of indiscernible life that pricks up our senses. Up until this point, his films drift weightlessly but rigorously through the lives of a group of characters, most often a family. It can seem ponderous and without direction, but once this aforementioned moment arrives, as it does in Tokyo Story, it instantly transmutes extraordinary depth into the preceding scenes, causing one to yearn to look back and redigest. Inevitably, this means that Ozu's films are best understood and savored upon second viewing, but this does not mean the soft, sobering, melancholy layers of feeling are absent during an initial experience. As with all artists, his work rewards emotional and intellectual commitment from the audience, and Tokyo Story, his most widely praised film, stands as no exception, perhaps even truer to this sentiment than most.

The film wades through typical Ozu waters: family relations, generational conflicts, and repressed emotions are central themes. His main characters though are a pair of old parents - Shukishi (Chishu Ryu) and Tomi (Chieko Higashiyama) Hirayama - visiting their children rather than a daughter struggling with the prospect of courtship, as was most frequently his subject. Shukishi and Tomi leave their rural town excitedly and with high hopes of learning of the independent successes of their children. Unfortunately, against the backdrop of an increasingly modernizing postwar Tokyo, their four surviving children (of five), are all maintaining busy separate agendas that disallow them from providing their parents with true hospitality. Ironically, a non-blood relative, Noriko (Setsuko Hara), the young widow of their dead son, is the only dealer of kindness and understanding. In the face of concealed selfishness and thin attempts at bonding, the couple is eventually cast off to Atami, where they contemplate their children, their status as parents, and when they should return home. 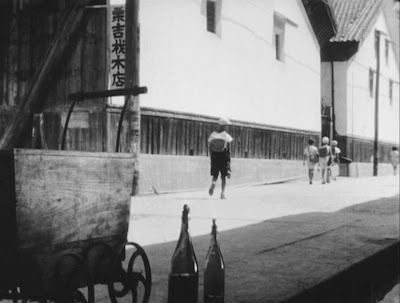 However, in the film, guises do nothing to communicate underlying emotions, so the banal, somewhat stilted dialogue and gestures that are witnessed don't always seem to ring true. Shukishi observes how their children are "better than average", which is an awfully cliffnoted version of expressing the difficulty of coming to terms with the lives they have laid out for themselves, which, sadly, leave little room for filial piety. Later on, Shukishi and Tomi do catch the train home, but Tomi unexpectedly passes away upon return. This bludgeoning realization of mortality adds a powerful new dimension to the story (this is that moment I was speaking of) and sends the children into deep lament, racing to see her in the house that had previously been too distant to visit. Once again, even given the grave circumstances, truthful emotions are covered beneath the rituals that follow a death, the necessity of bringing along the mourning clothes, and the looming question of when it is acceptable to call it a day and return home. In one touching scene after all of the children have left, Noriko shares a moment alone with Shukishi in which she acknowledges his sorrow and expresses understanding towards his impending loneliness. After all, she too has lost a partner. Still, when Shukishi praises Noriko for being such an honest person, she has trouble taking it, condemning herself for being selfish and eventually holding back tears. In this moment we see the wealth of feelings that lie beneath Noriko's unrelenting smile, Shukishi's frequently muttered and plaintive "yes", and even the hustling narrow-mindedness of the children.

This repression is in line with Ozu's modest, nondescript stylistic approach. While his characters sort out their thoughts, he does not discontinue his static gaze as a token of respect to them as well as an invitation to the viewer to spot nuances in behavior that may point towards a broader understanding of the character. When a scene ends, Ozu lets us view the surrounding environment, its boats, train tracks, clothes hangers, smoke towers, and shops, to provide an opportunity for reflection. Ozu never bluntly asserts his position; he'd rather let the audience sort it out themselves, and the effect is pure. Never in Tokyo Story does something feel unrealistic. Instead, the film reveals the inevitable disappointments in life, the transience of all things, and the coldness behind the facade that is inherent in us all (Shukishi's neighbor states to him with a broad smile after Tomi's death, "you'll be quite lonely now, won't you?"). After all, Ozu's cinema is all about inevitability and how we must accept it.
Posted by Carson Lund at 7:06 PM