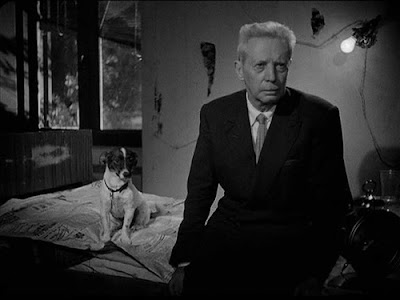 "A dog is a man's best friend" is a sentiment that has never been portrayed more aptly than it is in Vittorio De Sica's Umberto D. A monumental contribution to the Italian neorealist movement, the film chronicles Umberto Domenico Ferrari, a retired pensioner living off scraps in a one-room apartment he is in danger of being evicted from, and his adorably faithful dog Flike. Umberto is played by a non-professional named Carlo Battisti whose humane performance - one that he looks born for - almost guarantees no future acting repertoire. His existence, like many other elders (as shown in the opening protest), is marred by the difficult Italian postwar economic situation and the depersonalizing nature of modernity. Friendship, or simply human contact, does not come easily for Umberto; his snappy landlady, racked by bourgeois sensibilities, rudely reminds him constantly of his debts, the maid (also portrayed unprofessionally) hints at loyalty but is too weary-eyed and plain to be reliable, and the long-lost business partners he meets on his way are too self-absorbed to offer assistance. Throw in a cute and saintly dog to the mix and you have the ideal ingredients for an immodest weeper. However, Vittorio De Sica, who made his claim with the similarly honest The Bicycle Thief, deals with his subject with utmost matter-of-factness, supplementing overtly political material (the protest, community hospital sequences, a brutal dog pound) with pragmatic daily life (the maid's morning routine and Umberto's domestic struggle).

Sometimes De Sica's techniques mirror those of current contemplative filmmakers in his willingness to let his camera sit still and watch deliberately uninteresting activities at the expense of entertainment. For this, I commend his revolutionary courage (Italy produced loads of costume dramas and historical epics during this period). At the same time, I condemn the film's manipulative use of a typical movie score to stitch together the action; it seems De Sica stole a trick from the very films he was against and undermined the purity he was aiming for. This is a minor criticism though, for there is so much compassion in this film that it is rather easy to forgive a blemish or two.

Umberto D. is extremely understanding of its titular character and his relevant predicament. In the final and most heart-rending act, Umberto departs from his longtime apartment with a loose plan of lending his beloved dog to a trusty caretaker and subsequently ending his life. He approaches a haggard alleyway where a couple keeps scurrying dogs for money and, after inquiring about the price, he finds himself in a moral pickle. Umberto watches Flike cling to his leg while being growled at by the couple's bulldog a first time and musters up enough willpower to continue asking questions regarding the well-being of the dogs. All of his dignity teeters during this. The second time Flike whines by his ankle, the power of companionship pushes him to forget the negotiation and walk away. Although he continues his wrenching pursuit for Flike's new owner in a culminating sequence of brilliant emotional exchanges, this particular scene is the most telling example of De Sica's empathetic understanding: the pressures of socioeconomic struggles cannot overcome human dignity.
Posted by Carson Lund at 6:25 AM