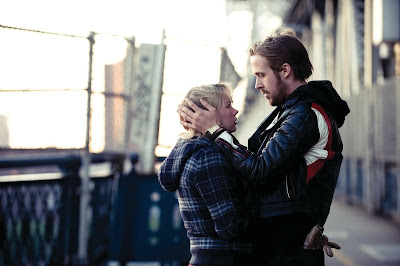 When I first saw trailers for Derek Cianfrance's Ryan Gosling/Michelle Williams vehicle Blue Valentine, I immediately expected a revival of The Notebook phenomenon: that is, a film so slack-jawed and precious in its celebration of "true love" that it would inspire red-cheeked mayhem from young girls nationwide. The only difference, seemingly, was that Cianfrance's film was posing as something more mature and adult, something digestible for an experienced romantic crowd. Not once did I expect it to actually be a mature evolution of The Notebook's earnestly sappy themes as well as a potent reversal of that film's ultimately optimistic, fairy-tale perspective that love triumphs all and is everlasting. Cianfrance's view here is a decidedly contemporary one sensitive to the transient pleasures and euphoric thrills of falling in love but also fixed in a very specific context where the idea of lifelong happiness in a relationship has become impoverished in the face of widespread divorce. Blue Valentine dissects this harsh reality by centering in on a young married couple who are at the brink of marital collapse, staring into the abyss of a single life but still grasping onto traces of an idyllic past. Limited in its scope, it's nonetheless a powerful, brutal, unsentimental film, but one not without a poignant realization of a kind of historical optimism, the ability to turn to memory as a way of coping with a dismal future.

Although there's no direct suggestion that the 16mm past sequences are being envisioned by Dean (Gosling) and Cindy (Williams), it's as if as the film's turbulent cross-cuts between present and past grow increasingly cued, Cianfrance is encouraging his beaten-down characters to just remember the origins of their relationship, to plumb the depths of their long-term memory banks as a way of reminding themselves of what made them so attracted to each other in the first place. Of course, even as he does this, he acknowledges that it's a near impossibility because the thick traumas of the present stand in such strong opposition. This is why the film's back-and-forth structure serves as such an effective device, for it allows the relationship's evolution, its peaks and valleys, to be deeply felt, but at the same time, in the gaping absence of what tied together the two extremes, it presents a portrait of two inconceivably separate worlds. How did Dean and Cindy get from point A, a pair of guileless lovers traipsing through Brooklyn streets, to point B, a married couple with an oppressive inability to communicate coherently? This disconnect illustrates the tendency for the majority of impulsive loves to experience an exponential decline in satisfaction rather than a static preservation of it. Every time Cianfrance cuts from one of the pungent snippets of newborn, spontaneous affection (which wouldn't seem out of place in The Notebook if they weren't so downright convincing) to a chilly episode from the present, the despondency and decline are palpable.

In a way, any echoes of The Notebook were extinguished in Blue Valentine's opening moments, a collection of fragmentary images that gradually reveals a complete, if claustrophobic, domestic setting. A young girl isolated in tall grass, a bizarre, telescopic view of a forest road, a stray bike, Gosling surfacing like a mirage smoking a cigarette beneath dark aviators: these images immediately and abstractly convey a warped domesticity, and it's unsettling how sealed off we are from a panoramic view of the surroundings. This is Cianfrance's primary cinematic vernacular for the entirety of scenes taking place in the present. Long lenses, tight close-ups, and an extremely shallow depth of field limit the plane of view to a few bobbing heads in blurry visual putty. The effect is discomforting, thrusting us into the hesitant non-communication of Dean and Cindy without an escape route as they bicker with veiled hostility about Cindy's chance meeting with her old boyfriend Bobby (Mike Vogel) or the tragic death of their golden retriever (a scene handled similarly to the main character's inciting incident in The Headless Woman by letting the source of the tragedy exist for only a moment in the lower portion of the frame) which propels the drastic emotional decline that takes place over the course of the film. Bicker may even be the inaccurate wording for what actually bubbles up between the two, which is less a form of rational conversation or argumentation as it is a minefield of half-finished ideas beating around the bush, a bunch of syllables left dangling in thin air. 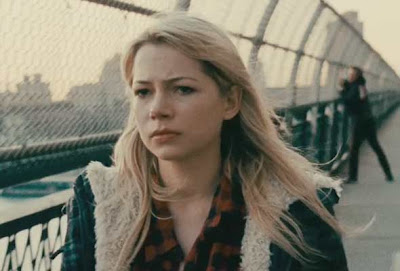 In this drama of muddy logic, where actions are hard to understand and even harder to articulate, Gosling and Williams are remarkable. Gosling, in particular, manages a scarily good balancing act of humor (in his stupid, simultaneously charming and charmless city rat accent) and feral intensity (in his sudden bouts of verbal fire and perpetual passive-aggressiveness). Although a climactic scene late in the film at Cindy's hospital workplace seemingly stretches Dean's character type by giving him a scene of uncontrollable violence against an innocent third party, Gosling's gradual ascension to this behavioral inconsistency is well-played, believable only because it's sold so passionately. Williams, on the other hand, communicates a great deal of her character's bottled-up irritation and disgust solely in the muscles of her face, which change from loose and elastic in past scenes to tight and constricted in the present, most salient in one of the film's greatest scenes - and one of the greatest in recent American cinema for that matter - in which she deflects Dean's sexual advances in the shower of a sleazy hotel's "future room", captured by Cianfrance's dreamily claustrophobic camera. It's only in her snatches of dialogue that the script delivers some of its most leaden lines about Dean's childlike behavior and stubbornness. In the past sequences, Cianfrance's light, improvisational approach gives ample space for the performers to shuffle through and discover their characters' respective tics, lending an air of on-the-fly, by-the-minute character development similar to what unfolds with Truffaut's young heroes in Jules and Jim, right down to Cianfrance's quoting of Truffaut's famously bumpy shots of the lovers running down the street. The weight and totality of Dean and Cindy's potentially doomed relationship is reflected in the vivid physicality of Gosling and Williams, and simply put, their intense method acting.

If there's one glaring obstruction to Blue Valentine's well-mounted patina of realism, it's the musical score of Grizzly Bear. One could make the argument that the Brooklyn quintet's unique psych-folk is a natural extension of the film's location, its "indie" vibe, and its evocation of dreamy in-between states of love, but I found myself stopping to listen to the music every time it interjected, mentally singing along or otherwise tapping to a familiar movement. In a word, I wasn't watching the film in these moments and digesting the drama, but rather finding enjoyment in the already enjoyable music of Grizzly Bear. If there was one instance when the music worked wonderfully with the film's gradation of moods, it was in the final few minutes with the alternate version of Horn of Plenty's fifth track "Shift", released on 2007's collection of loose-ends, Friend, probably largely because it's a song I haven't listened to much. Maybe this is purely my problem as a fan of the band, but I don't think it's going out on a limb to say that any film runs the risk of diluting its drama when it uses as a tie-in the ubiquitous music of a band in the popular sphere. Or maybe it's just that the lyrics in "Shift" so interestingly compliment and complicate the onscreen relationship: "Baby I've got silver and I've got gold / But when push comes to shove, this is getting old / I wouldn't have it any other way". As much as Dean and Cindy know it's for the best that they push apart, they wouldn't have it any other way. Such is the essentially self-destructive paradox in a sad number of modern marriages.
Posted by Carson Lund at 5:13 PM

One of the best films of the new year. I'm a bit surprised you'd think of bringing The Notebook into the discussion. Even based on the trailer alone I would have never made the comparison.

C'mon, Ryan Gosling, a pretty blonde, an idyllic relationship? It seemed an adequate first comparison. I hope it made it clear enough though that upon watching the film I realize it's much, much better than The Notebook.

Plus, the idea of Gosling coming from a battered family history and a lower-class background and seeking a more affluent woman is shared across both films.

The superficial character similarities, I suppose, but my own expectations were light years away from a Nicholas Sparks story. Though yes, you clearly distanced yourself from it as soon as bringing it up. I guess it put me in mind of saying something like, "I went into Let the Right One In expecting to be suffocated by a Swedish version of Twilight".

Anyway, I was very impressed with the film, and wish it could be made mandatory viewing for certain couples on Valentine's Day. :)

Here are my own thoughts, taken in tandem with your very favorite Black Swan: A Cinematic Black and Blue. As stated at the end, if neither Portman or Williams takes best actress, I'll be threatening black and blues myself.