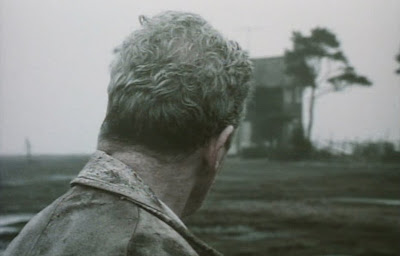 The Sacrifice is the unusual brainchild of Andrei Tarkovsky and Ingmar Bergman, two of my favorite filmmakers, and as such there’s no reason why it shouldn’t be one of the greatest films ever made. Granted, Bergman never touched the project. It’s just that his influence rubbed off on Tarkovsky so saliently – the Swedish location, the Swedish cast peopled by Bergman regulars, the penetrating family drama – that it feels as if the two were co-directing. In actuality, Bergman’s piercing psychological investigation via earthbound drama is often in competition with Tarkovsky’s unpsychological, spiritual mysticism, resulting in a film that is split in half by the two sensibilities, never confidently blending them. Yet even this tension produces something of great interest, because while Tarkovsky lacks the tact and fluidity of Bergman drama, this ineptitude only amplifies the onslaught of poetic soul-searching that the film settles into, intensifying it in contrast to the comparatively stale talkiness of the first half. Though not his most accomplished work, like all of Tarkovsky's films, The Sacrifice's bold mystery and haunting imagery only grows in the mind after its completion.

There's also a good chance that this fissure in the film's structure is indebted to Tarkovsky's thematic position that there's a drastic disconnect in the world between humanity's material and spiritual development. Early on, the film's main character, Alexander (Erland Josephson), a retired actor and philosophy professor, muses openly to his deaf-mute son (Tommy Kjellqvist) about this very idea that modern mankind has abandoned any sense of spirituality to become smitten with all forms of material ownership. If not for the beautiful languid pace of the camera as Alexander speaks, roving through the skinny trees and tall grass swaying in a light breeze, the scene would smack of didacticism, existing as a rather pat summation of the film's concerns. The same goes for the rest of the first half as well, as Tarkovsky stages banal philosophical discussions among Alexander's family that are salvaged by the striking choreography of bodies, the way his camera manages to effortlessly glide into grand compositions. In their rote intellectualism and directness, Alexander's conversations with his friend Otto (Allan Edwall), his estranged wife Adelaide (Susan Fleetwood), and the rest of their acquaintances are never entirely believable. But when news of a nuclear holocaust surfaces on the television, the family grows convincingly solemn, with the exception of Fleetwood, who hams up a crying fit before thankfully being put out by Otto with a powerful sedative.

Fortunately, the film witnesses a sudden injection of life at this point, even though it ultimately grows quieter, stiller, and more threatening. Alexander makes a bargain with God - in a scene shot from an omniscient aerial perspective by Tarkovsky and regular Bergman cinematographer Sven Nykvist - that if he and his family surrender the totality of their material existence, the nuclear warfare will not occur. Only a character with the kind of all-consuming religious faith that Alexander possesses could argue for such a seemingly hasty and absurd pact, and only a director as gracious and believing as Tarkovsky could bring such dedication and compassion to the presentation of his spiritual pursuit. The Sacrifice cycles through dreams, hallucinations, and real events to depict a complex firsthand understanding of Alexander's spiritual predicament. In the film's eeriest scene, Alexander wakes up in a quiet, black and white space where, after Tarkovsky scans the ground for relics of the past in one of his familiar touches, the coming of a strong wind represents a jolting obstruction to the peaceful dream. The camera then tracks sideways through the house's hallways, glimpsing in the background a nude body skipping away in slow motion, birds taking hesitant flight around her. Color gradually saturates the frame, and miraculously the shot transitions back into reality. 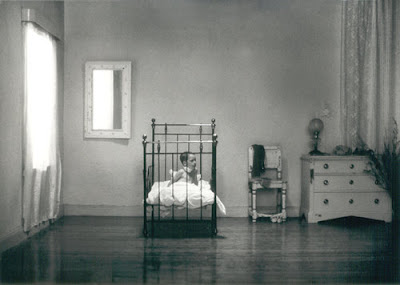 But is there any certainty of this? There's a line in the film about reality being malleable, ever-shifting, and basically an illusion, and this is made concrete by Tarkovsky's tricky approach. He's consistently swapping film stocks, playing with perspective, confusing spatial understandings, interrupting any notion of linear time, making it unclear what a stable basis of physical or temporal reality is. Even before Alexander's pact, Tarkovsky rather noticeably invites harsh distortions to the natural color palette, layering a reddish-brown or greenish filter over the primarily gray interiors of the seaside home. After the news has struck, the family maid, known around the countryside as a witch, is standing outside the house in a patch of tall trees. While looking towards the vicinity of the camera, she calls softly to Alexander, after which the camera slowly dollies in, seemingly predicting his movement. But then Alexander emerges from the right side of the frame; we're not the only ones thrown off, for the woman turns in slight surprise too. Later, Otto and Alexander stare through a window at the sacrificial icon painting that graces the screen during the film's credits. Tarkovsky employs a classic shot-reverse-shot structure with tight close-ups of the painting and the faces of the two men, but once Otto walks out of the frame and Alexander motions forward towards the painting, he is revealed not to be standing right in front of it, as the intimate shots would suggest, but instead across the room from it, a good ten feet away. All of these mutations to traditional film grammar subtly jostle the viewer out of their comfort zone, creating sequences that never quite luxuriate in an accurate approximation of the world but rather approach an abstract, hallucinatory zone.

That Tarkovsky retains belief in Alexander and doesn't resort to smug snickering even when he is sneaking around his family, rummaging through their things, and ultimately burning their house down when he immerses himself fully in his spiritual convictions in the explosive climax is a testament to the deep spiritual connection he has to his artwork. The Sacrifice is not afraid to risk absurdity itself in the radical nature of its structure - long slabs of real time combined with elusive, dreamlike montage - or in the extremity of its content, making it, and its creator, analogous to the central figure, a man doggedly tied to religious piety and opposed to modernistic tendencies. Somehow, the film's most wayward ideas, spawned from lofty concepts about the limits of faith and reason, like the virtual reprise of a scene of levitation in Mirror or the ten-minute-long house-burning sequence, a combination of cinematic grandiosity and improvisational vérité, work in the context of Tarkovsky's consuming seriousness. And of course, this shouldn't devalue the sheer craftsmanship at work, such as the beautiful contours in the bifurcated design or the rich ambiance in the interplay between Bach, obscure Japanese bamboo flutist Watazumido-Shuso, and the subdued natural sounds. Thus, in all its contradictions and minor missteps, The Sacrifice emerges as an essential Tarkovsky work, a film so devoted to its esoteric spiritual themes that it becomes a kind of Bible of its own.
Posted by Carson Lund at 10:39 AM