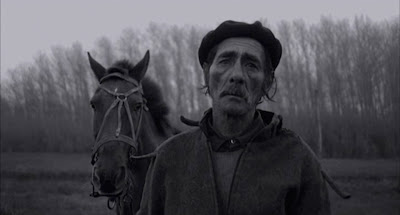 For a while now, I've aimed to find a solution to the endless pile-up of movies I see and don't end up writing about right away. The problem has increased exponentially the more work I have to do outside of blogging, and it just so happens that I'm in the thick of pre-production on a new short film right now, so matters have become worse. Less time to write, less time to commit myself to thinking about a movie for four or five consecutive hours. So the ideal way to solve this is to do quick-and-dirty write-ups on all these stray films, making sure I don't forget my primary thoughts on them by the time I do a formal essay. Therefore, I present "Screening Notes", an idea heavily indebted to Ryland Walker Knight's "Viewing Logs" over at his blog Vinyl is Heavy. I like the off-the-cuff quality to his work, and I find myself reading it (and other work like it) with more frequency than long-form essays simply because I don't have as much time to devote to them. This is not to say that I will be eschewing my common approach at all; I just hate to find myself abandoning films because I forget what I wanted to say about them in the first place. Here's the first entry in what will likely be a continuing journal of notes, and as you'll see, my notes will refer to both full features I've seen and other various media clips (single scenes, short films, youtube videos, etc.).

Lost in Translation (2003): In some respects a theft of the calming, moody nighttime ambiance of Hou Hsiao-Hsein's Millenium Mambo (and more generally all of Hou's films), Coppola's most popular film nonetheless gathers its own steam over its modest running time, due largely to Murray and Johansson's chemistry. Like her male protagonist in a Japanese scotch commercial, Coppola is mostly posing for cool sensuality without actually being sensual. It can be a dull slog, but I suppose that's the point. Great soundtrack and great hidden final line.

Leon the Professional (1994): In spite of his hitman/pre-pubescent girl romance taboo, Luc Besson's debut is fiercely unimaginative, more interested in being a Hollywood sleeper hit than in using its independent spirit for something worthwhile. Some of the dialogue here - particularly in Jean Reno and Natalie Portman's first revealing conversation - is hysterically obvious, and Gary Oldman's sniveling villain makes me laugh more than cower. And for a work that purports to be a muscular action film, it doesn't actually grow any muscle until its final act.

Marie Antoinette (2006): Unfortunately, I caught Coppola's third feature on the Sundance channel at what I suspected to be somewhere in the middle. Normally, I would never continue watching a film I haven't seen before if dropped awkwardly into the bulk of its run-time, but Coppola's sedate rhythms were striking to me, especially after a long and physical day of skiing. She certainly was watching some Malick when she made this one, evidenced by all the offhand shots of blowing grass and sunlight. Turned out it was the final thirty minutes that I watched, but I was unusually moved by it. I'm not sure what all the negative fuss was about. I'll be returning to it in its full glory for sure.

The Motorcycle Diaries (2004): A similar story here, except I've already seen Salle's sprawling travelogue/coming-of-age tale about Che Guevara before he became Che Guevara. Complaints are often lobbed at the film's generic apolitical tone, or more politely, its refusal to stuff the blossoms of Che's ideological tenets down the audience's throat, but I like the universalism of it, the way it treats the notorious revolutionary's drama as a hazy realization of global inequities rather than a scholarly essay on the precise forces that cause those inequities. The final act, set on a Peruvian island full of the terminally ill and deformed, is a prime example of honest, humane filmmaking with a breathtaking backdrop, and the epilogue, a series of moving postcards of the various people Che meets on his journey, is a reminder that time is not a static document but a continuum.

The Lord of the Rings (The Return of the King) (2003): A single cadence within all the mayhem is quite lovely: little Mary sings a local folk tune while the barbaric warrior beside him devours food. Elsewhere, an army charges violently at orks. Jackson builds a rhythm by intercutting between these two scenes, and the collision between the gentle airiness of Mary's voice and the impulsiveness of man around him is a marvel of Eisenstinian montage.
Posted by Carson Lund at 11:54 AM

I like these little blurbs a lot, but I think you may be missing the meaning of the Lord of the Rings bit. Merry is singing to the Steward who is feasting in a grotesque manner as his army charges towards Orks who have over-run a city, and towards their demise. This army includes the Stewards' last remaining son and heir who had never lived up to the life of his older brother Boromir who had died in the first film. I know this makes me look like a horrible nerd, but this is a great scene that is undercut with a lot of themes and meaning, and I felt like you either forgot the details or failed the recognize them (I assume the former given your generally astute nature with film).

I watched the scene in a pretty isolated manner, so I did definitely forget the wider story details. But I still don't think that it negates what I said. I didn't describe anything about the plot mechanics of the scene, only the radical tonal juxtaposition of beautiful singing and barbaric feasting/fighting. That's what I liked about it.