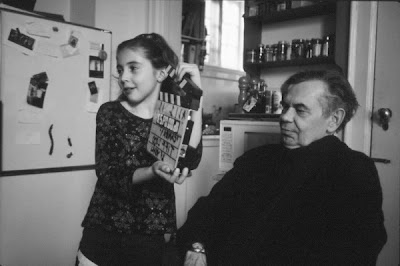 David Cronenberg has been fixated throughout his career on the idea of the camera, the apparatus of cinema, being an intrusion on the human body. Often times, as in The Brood and Naked Lunch, this is merely a hidden subtext, its implications obscured in the onslaught of body horror, but other times, as in Videodrome, Cronenberg makes it explicitly clear what his thoughts are on the relationship between the voyeuristic mechanism of the camera and the vulnerable human body. But perhaps his most direct and potent evocation of this theme is his 6-minute short Camera, which is not only open with its title but also with its blatantly suggestive imagery, vacillating between crude, claustrophobic digital video and clean, formulaic production values.

What’s particularly fascinating about the film is its all-encompassing array of ideas, which sneak subtly into the film despite the seemingly obvious nature of the premise: a group of young kids jovially wheel a new Panavision camera around the interior of a house, preparing to shoot a scene with their “father”, the actor Leslie Carlson. The film begins with a long monologue by Carlson addressing his disenchantment with aging and acting, especially how the two interact in a not-so-glamorous fashion. Cronenberg shoots these scenes by getting right up in Carlson’s face, roving over the contours in his expressions like a satellite observing a foreign planet. His camera makes an abstraction of the face, watching closely as the sweaty sheen on his skin dances around in response to the moving shot. Ultimately, Cronenberg is capturing the unvarnished “truth” of the human face, as opposed to the mechanical artifice of the climactic shot when the children spruce up Carlson and prepare for a slow dolly in that illustrates a commodified perception of the human face. His makeup conceals the growing threat of his own mortality, suggesting that the dominant cinema form denies acknowledgment or exploration of human mortality and aging.

Carlson’s shifting manner of performance – from grizzled, hostile cynic to pleasant, easygoing actor – further implies that the camera has a hypnotizing power that suffocates accurate human feeling, encouraging a strained approximation of truth. In spite of Carlson’s impassioned resentment of the overbearing weight of the camera lens, and the way he sees it as a machine that neglects and thus emphasizes his aging, the moment the children turn it towards him, he alters his behavior. Tellingly, Cronenberg makes the film crew a group of children Carlson treats as his own kids, a conceit that is at first a silly sight gag and subsequently a rather insightful commentary on the increasingly youthful film industry. It’s as if, while recognizing the promise of this young talent pool, Cronenberg is also lamenting the loss of the older, and potentially wiser, school of filmmakers and actors, as well as the scarcity of elderly concerns in films. Camera, notwithstanding its short length and deceptively limited scope, is actually one of Cronenberg’s most multifaceted dissertations on his own medium and its industry.
Posted by Carson Lund at 9:52 AM