I have recently joined a relatively new online film journal called Cinelogue as a contributing writer. It's an interesting outlet for me to publish my essays because for the first time it offers a collaborative atmosphere within which to write, a place where my writing exists beside the work of others. At least in my experience, that's a new and exciting concept. I'll be cross-posting most of my work from here on Cinelogue (my piece on Blue Valentine is already published), so there's a good chance I won't have any completely original, exclusive material on there, but I would still encourage any of my gracious readers here to check out the site and roam around. There's some great writing to be discovered by relatively unknown writers. In the long run, my contribution to this site might lead to more stream-of-consciousness posting here (image essays, general jots) and more substantial essay work there. Who knows where this will take me. As for now, I'll be linking each post to their respective double on Cinelogue, just in case it encourages you to explore beyond. 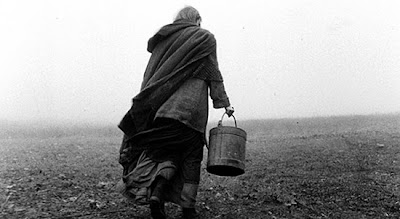 On another totally unrelated note, here's some of the films I most enthusiastically anticipate seeing in a theater setting this coming year. I'm probably missing a bunch, but to gain some semblance of organization, I've compiled the films that will either definitely reach American theaters this year or which I hope will gain niche distribution. Heck, some of the films might not even be completed by the end of this year.

Turin Horse (Tarr, Hungary) and Tree of Life (Malick, USA): I'm banking on both of these being the closest thing I've ever had to a religious experience at the theater. The former, Bela Tarr's supposed final project based loosely on the source of Nietzsche's enigmatic psychological "madness", and the latter, Terrence Malick's long-awaited Brad Pitt-starring opus about, well, everything, seem to comprise everything I value in cinema today from two of my favorite directors. Malick's trailer alone is a visually resplendent work of art.

Meek's Cutoff (Reichardt, USA): Kelly Reichardt is slowly building what I hold to be one of the most distinctive and important oeuvres in America. I'm utterly thrilled to see how her minimalist, social-realist sensibility will play out in a period piece about the Oregon Trail.

Uncle Boonmee Who Can Recall His Past Lives (Weerasethakul, Thailand): The moment when I became infatuated with this film now seems like forever ago, but it nonetheless remains at the forefront of my curiosity, due no doubt to Joe's absolutely sublime short earlier this year, Letters to Uncle Boonmee. With a Palme D'Or on its back, I see no reason why this won't get an independent theatrical run.

Film Socialisme (Godard, France): Maybe someone will pick up this obscurity by cinema history's least obscure director? No, who am I kidding, it contains more than three languages.

Restless (Van Sant, USA): The trailer for this romance involving the ghost of a Japanese kamikaze pilot from WWII (?) looks rather anticlimactic, even disappointing, after the extraordinary, thematically cohesive string of films Van Sant has been creating of late, but because it's a danger to submit too much to marketing campaigns and because it's still a Van Sant film, it has to be at least marginally interesting.

The Grandmasters (Wong Kar-Wai, China): I never saw My Blueberry Nights, but the generic negative reaction to it isn't enough to suggest Kar-Wai has lost a touch of his magic. This one's about a martial arts master who trained Bruce Lee - fitting content for a director who has somehow managed to capture on film all the intangible essence Lee tends to muse on about. It's still in production though, so there's no saying the IMDB release date of 2011 is really accurate.

Of Gods and Men (Xavier Beauvois, France): Hopefully a Bressonian religious drama pitched somewhere in the gaping terrain between Doubt and Into Great Silence.

Into Eternity (Madsen, Denmark): "Defamiliarizing the snowy Nordic landscape, this delicately lurid documentary has a somber beauty. It is meant to boggle the mind and inspire awe — and it does. As in 2001 or The Time Machine, the story of the human race comes full circle. The unknown past meets the unknowable future in a wintry ground zero."
- J. Hoberman

Heartbeats (Dolan, Canada): According to reports, young director Xavier Dolan's second feature made something of a fuss at Cannes this past year, and the trailer, while somewhat of a Wong rip, certainly looks like candy. It seems to have enough of a "hip," post-Nouvelle Vague quality to gain at least limited distribution in the states.

Caves of Forgotten Dreams (Herzog, France): It's about ancient, nearly untouched caves in Southern France and it's by Werner Herzog. Sounds like a feast.

Melancholia (Von Trier, Denmark): Lars Von Trier's name now puts a bad taste in my mouth, but there's no doubting that his films - from the ridiculous and preposterous to the viscerally affecting - are events unto themselves. Among other nonsense, Melancholia treads Persona-esque psychological penetration via intergalactic collisions, and it's going to be interesting, as always, to watch Von Trier either fail uniquely or succeed horribly.
Posted by Carson Lund at 3:44 PM

That's so funny. Jack Eason of Cinelogue has been a very close online film friend of mine for the last 6 years! I really enjoy his opinions and his writing is a lot of fun to read.

I didn't know that Bela Tarr was making a new film (so thanks for the info) but its intriguing plot as well as those of Melancholia and Tree of Life makes me very excited. I'm hoping to see Hou Hsiao Hsien's THE ASSASSIN out this year too.