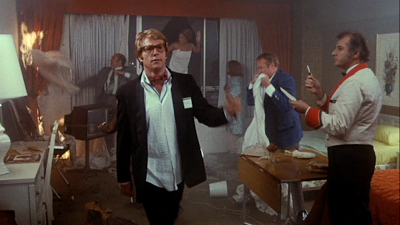 Surfacing after the quiet, melancholy, restrained The Last Picture Show, Peter Bogdanovich showed himself to be a true chameleon, and an especially adept one, with his diametrically opposed follow-up What's Up, Doc?, a delightful homage to the great American film comedies (and sometimes foreign comedy) of the preceding six decades. Specifically, the film uses Howard Hawks' screwball gem Bringing Up Baby as a fundamental reference point for its structure, plotting, and characters, but along the way it also targets Chaplin, Keaton, Lloyd, Tati, Lubitsch, McCarey, Sturges, and Wilder, and features fleeting references to other non-comedic classics like Vertigo and Bullitt (the latter only a year old at that point). Bogdanovich, ever the film scholar, is creating a kaleidoscope of cinema pastiches, committing wholeheartedly to Godard's line of thinking regarding the inherent thievery of the medium. But, as a film made just a few years after the collapse of The Production Code and the introduction of new, still uncertain rating system in the MPAA, What's Up, Doc? is permitted an erotic energy only implicitly acted upon – and often avoided altogether – in the screwball comedies of the previous 40 years.

Here, Ryan O'Neal and Barbra Streisand replace Cary Grant and Katharine Hepburn (David and Susan from Baby) as Howard Bannister and Judy Maxwell. O'Neal, the kind of unassuming star who can headline a film without making a particularly bold impression (and I say this in acknowledgment of it as a unique trait), is a perfect match for the absent-minded professor type seen so frequently in early American comedy and which Grant could play so well. Howard is a cluelessly geeky musicologist searching for the supposed inherent musicality of igneous rock formations (the film makes hilariously articulate use of his out-there pastime) who is about to be trapped in an outlandishly formal marital arrangement with his fiancée Eunice Burns (Madeline Kahn). In his well-tailored suits, his corny bow ties, and his boxy glasses (a getup that can be traced back to Harold Lloyd), he screams uptight and malformed, but Judy, in addition to finding him an attractive man stuck in the body of an out-of-touch nerd, recognizes his debilitatingly plain lifestyle and sees something inside of him in need of awakening. She then sets as her goal the complete upending of his life, assuming at some point along the way he will fall for her. 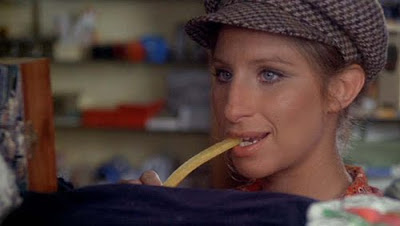 It's a screwball setup that is familiar to the smallest detail: the male heading towards a passionless marriage tied to old-world values confronted by a brassy, sensual, and unapologetically disruptive love object, wherein he is forced to ultimately re-evaluate his standards of living. Bogdanovich even echoes key plot developments and sight gags used in the setup of Baby such as the female's pseudo-accidental ripping of the back of the male's suit-coat, her role-playing as his wife during professional circumstances and talking over him when he tries to deny the fabrication, her disruption and near-sabotaging of his pursuit of a large grant from a professional colleague, and the integration of an object on the loose that needs to be re-captured (a leopard in Baby, igneous rocks in What's Up, Doc?). Other stray allusions are scattered across the film: Howard finds Judy in his hotel room lounging in a bubble bath, reprising Tony Curtis' identical behavior in Some Like it Hot; a secretive conversation at a festive dinner takes place underneath a table, borrowed from the same film; Howard and Judy sing a duet on a piano, obliquely reminiscent of Ralph Bellamy and Irene Dunne belting one out in The Awful Truth; Howard and Judy must negotiate a financial mix-up towards the end of the film, recalling Clark Gable's humble sacrifice of reward cash in favor of a measly $10 at the conclusion of It Happened One Night. The list goes on.

Instead of feeling like Bogdanovich is hollowly parroting his beloved classics, these varied reference points are given life by the film's singular location, its lively performances, and especially its extratextual context (1972 and the onset of a different approach to cinematic romance and sex), allowing it to feel like one last hurrah for the old tradition as Hollywood ushers in a new, uncertain era of comedy. That the film is set at a musicology convention at a hotel seems particularly apt; not only is Howard in a transitional state as a character, traversing from one mode of being to another, but so is the genre Bogdanovich is working in. Throughout the film, Bogdanovich cleverly manipulates the sexual energy, comedically towing the line between the polite innuendo of the past and the looser approach to the human body brought about by the sexual revolution. When Howard finds Judy in the bubble bath and begs her to leave, she playfully threatens to get out naked, prompting shrieking discomfort from Howard. One gets the sense that if Howard were not so uptight, a sex scene might have unfolded right then and there, but instead all that happens is a rolling-on-the-floor simulacrum of sex with Judy in a towel and Howard in a suit, itself an image of physical contact that would never have been permitted in the 30's. Later, when the two finally do kiss, Judy is extremely forward in her sexual advances, letting down her hair and spreading her body out towards him. When they begin passionately making out on the floor, Bogdanovich slyly cuts to a shot of a shocked janitor walking in – a variation on the default gesture of passivity marking early screwballs. In these instances, Bogdanovich is overtly creating a dissonance between the withholding of desire and the outright expression of it, a dichotomy that marks the juncture at which the film rests in the history of American comedy. 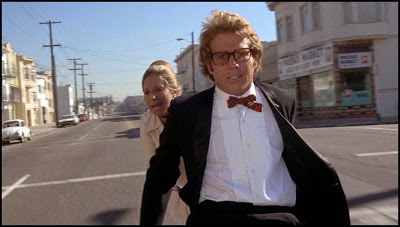 What also lends What's Up, Doc? a weight of its own is the fact that Bogdanovich, having already proven his chops as a Fordian dramatist, has a remarkable sense of how to patiently build a joke. The film's claim to fame is a spectacularly lengthy chase scene through the hilly streets of San Francisco that is the full realization of the Looney Tunes sensibility alluded to in the title. Trying to escape the convention, Howard and Judy (at this point, Judy has sufficiently charmed her object of desire) hop on a stray bicycle with a grocery bin attached in the front, loading up the four overnight bags uproariously misplaced and mixed up throughout the film. One contains Howard's rocks, another contains Judy's underwear, yet another contains a bag of jewels, and the final bag is filled with confidential government paperwork. The ensuing sequence features the owners of each bag chasing the two lovers to reclaim their respective property: Eunice's fiancé, a horde of fellow musicologists' colleague, an old women's jewels, and a gang of secret agents' prized information. (It goes without saying, but once the chase balloons inevitably into urban chaos, policemen catch on as well.) Chock full of spun-out cars, swift changes of direction, and near-catastrophic evasions of obstacles, it's a manic cartoon brought to life that is informed by a Tati-esque sense of the inherent confusion of the modern urban environment.

The best thing about this sequence is the play with space and movement, as well as the physical interaction of bodies within that framework, so the mad logistics of what's actually going on take a backseat, which is somewhat true of What's Up, Doc? as a whole. Plot-wise, the film is never quite as tight or satisfying as the great Hawks, Sturges, and Wilder comedies Bogdanovich is drawing from (the whole bag thing, for instance, gets awfully confusing, and not always in a funny way), but O'Neal, Streisand, Kahn, and the rest of the ensemble are so assured in their roles that they supply a cinematic energy to compensate for the moments when the script lags or feels overly familiar. Similarly, Bogdanovich's compositional discipline and knack for color coding (the faded tones of Howard and Eunice's clothing are contrasted by the hotel's vibrancy as well as Streisand's bright blue eyes and, with the exception of her hip detective look, passionately colored outfits) offers a dimension of New Hollywood formalism to a genre not previously known for visual flair. Both qualities give What's Up, Doc? its precise balance of homage and conscious separation.

Carson very nice to see you review this film, one that I feel doesn't get much credit very often, but one I REALLY like. The two leads are very good together and I especially like Streisand whose timing is just great. It's a fun movie.

Yeah, I actually haven't paid attention to whether or not it's received credit over the years, but it definitely deserves it, as does most early Bogdanovich. It's funny, because two years ago I probably would have rolled my eyes at a so-called "fun" movie like this, but after catching up with so many comedies of the 30's and 40's, I find it brilliant.

Thanks for the post! I recently just saw this film in a theater in San Francisco for the first time. I love that you compared it to Bringing up Baby. I noticed the parallels as well since that has always been one of my favorite movies. I agree that a few things like the bag mixup were just too confusing in a bad way sometimes, but it was still a fun movie and great to see all the SF scenery.

Seeing it in SF would have been ideal! Thanks for the comment.