The Last Picture Show (1971) A Film by Peter Bogdanovich 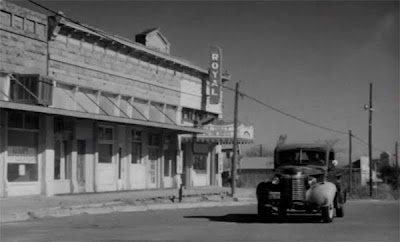 For one hundred years, people have gone to the cinema, if only subconsciously, to attempt to understand and know the world, to watch lives running on parallel tracks to their own. Whatever a viewer's penchant for conscious analysis, the movies have forever offered commentary on the timeline of one's life. Rarely is this realized and conveyed as potently as it is in The Last Picture Show, Peter Bogdanovich's loving elegy to a minuscule Texas ghost town (a fictional Anarene) whose few citizens hop in and out of the cinema like it's just an ordinary activity in the daily routine. Truth is, there's not much to do in Anarene anyway, aside from the cinema, a pool hall, and a habitually empty diner, all overseen by town veteran Sam the Lion (Ben Johnson in an Oscar-winning supporting performance). Bogdanovich doesn't even show the cinema-going ritual much, simply as a restful grace note here and there, but it nonetheless supplies an unmistakable presence in the film, a place of simultaneous escape and introspection. And when the titular event does occur offhandedly towards the conclusion of the film, it's wrung with extraordinary power, able to stand in for not only the death of a cinema but also the collapse of a way of life, financially, socially, and personally.

The film closely follows high school seniors Sonny Crawford (Timothy Bottoms), Duane Jackson (Jeff Bridges), and Jacy Farrow (Cybill Shepherd), straining to get to know them even at the expense of narrative momentum. Sonny and Duane are both smitten with Jacy, the manipulative blonde-haired beauty of the town, but at the beginning of the story Duane is dating her, with Sonny merely looking on in quiet jealousy as his catty, bubble-gum chewing flame Charlene Duggs (Sharon Ullrick) gives him hell for yearning to get in her pants. These teenagers live in a hermetic world where driving off to the deserted outskirts of town to makeout and feel each other up offers the only illusion of breaking away. But at the same time there's very little desire to leave this town where everyone knows everyone, if only for that fact that its dusty town center, reducible to a single road, breeds familiarity and comfort, a base of stability for the otherwise drifting interior lives of these people. Both Sonny and Duane, football stars on the high school team, are fatherless, and they turn to Sam for moral support and guidance. Jacy, meanwhile, bounces hesitantly from guy to guy, desperate for confirmation of her sensual charm while her rich and clueless mother is unable to offer anything but generic encouragement and non-specific advice. 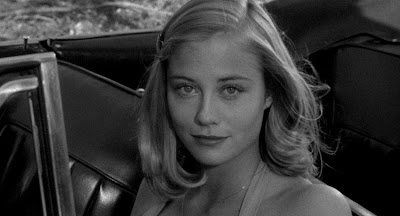 Beyond the central characters - and this is one of The Last Picture Show's great strengths - Bogdanovich is able to balance his attention on a considerable number of peripheral figures, important people in the town that play into Sonny, Duane, and Jacy's stories. Sonny starts up an initially skeptical May-December affair with his football coach's wife Ruth Popper (Cloris Leachman), whose marital neglect may be the "sickness" she diagnoses herself with to Sonny. But one can sense his palpable desire to be with someone his age even when her supposed sickness vanishes from romantic ecstasy, and his sexual angst is clear whenever he stops in at the diner to speak to Genevieve (Eileen Brennan), the confident waitress. Jacy abandons Duane at the town's holiday dance to attend a nude indoor swimming party at the mansion of Bobby Sheen (Gary Brockette) - a sequence that is heart-stopping in its judicious back-and-forth of wordless glances - who seduces her with his forthright sexual taunts but ultimately denies her because she's a virgin. Being the schemer she is, her plan is to sleep with Duane so that she can subsequently woo Bobby, but when Duane loses confidence and Bobby finds a more experienced girl she resorts to her mother's lover (Clu Gulager), who defiles her swiftly in the shadowy pool hall in the film's most riveting scene.

A great deal of conflicts are waged and dissolved here through sex, which Bogdanovich is unafraid to intimately detail. His knack for visual suggestion through minor detail shots - Jacy's hand gripping the pool pocket, Ruth's single tear as she turns away from Sonny, Duane's deer-in-the-headlights look when he leans over Jacy for the first time - cuts right to the emotional core of these frequent sexual encounters. The cast is uniformly spot-on in their depictions of sex that runs the gamut from tepid and dispassionate to heated and emotionally charged. Shepherd in particular is stellar in her role, freezing Bogdanovich's camera every time she looks in its direction with her glistening, naive eyes and her glossed lips that curl as if to communicate her body's every urge. Despite the ambition of every guy in town to possess her both for her money and her looks, she has an emotional volatility and inability to connect that is disconcerting, so much so that when Duane departs to the army towards the middle of the film and Sonny finally gets his shot at her, the reaction is not one of encouragement but of apprehension. No matter how close he thinks he can get she will remain remote, and he's probably better off continuing his secret romance with Ruth than feigning a marriage with Jacy. 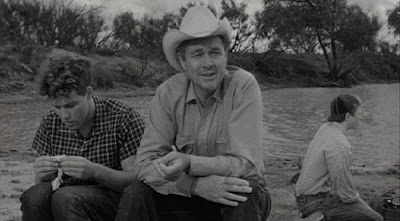 Unlike his early seventies' American contemporaries, who were guilelessly attempting to pick up where the French New Wave left off, Bogdanovich channels the workmanlike simplicity of John Ford and Howard Hawks in his compositional palette and lugubrious pacing (even paying explicit tribute to Hawks by using the final clip from Red River as the last flickers in the local cinema). The Last Picture Show, among the minority of the period as an American studio release voluntarily shot in black-and-white, is mostly comprised of melancholy establishing shots and familiar deep-focus conversational setups. Its narrative is revealed in fragments as Bogdanovich vacillates between different stories within the town, with pensive dialogue and sexual activity always overshadowing key dramatic epiphanies such as the death of Sam the Lion, Sonny and Duane's trip to Mexico, or (the final blow to the head) the tragic death of Sonny's childhood friend Billy (Sam Bottoms) when he is struck by a getaway car in the middle of the barren street.

Anarene's already fragile infrastructure begins to unfurl after Sam's passing, shattering the town's economic foundation and Sonny and Duane's moral centers. They get in a brawl over Jacy while Sonny struggles to maintain the pool hall, Jacy finally leaves town after a failed getaway with Sonny, and the prior concession stand attendant loses grip in her newly acquired position of cinema management. Ever so gently, the collapse of this specific small town becomes a metaphor for anyone's childhood home and the juncture in one's life when he must confront the passing on of traditions and the modernization of property and society. It's a subtext that is liberated from nostalgic sentimentality, reflected in Duane and Sonny's unassuming final trip to the cinema and their quiet resignation to the shifting flow of life. Furthermore, it's an elegiac memorial to an old tradition of filmmaking, and filters its coming-of-age trajectory through a variety of larger shifts in American cultural heritage (its setting is lumped in the calm between World War II and the Korean Conflict). The film's modest echoes of the classical Hollywood era and the Western genre are indicative of a passing age, whereas the death of those values signals the ushering in of a new, uncertain future.
Posted by Carson Lund at 6:38 PM

Do you know why Bogdanovich went with black and white here, was it just to portray the past? Overall I found The Last Picture Show slow, though it had a certain atmosphere, maybe the slow pace was an intentional decision to mirror real life slowness in a small town.

Have you seen Paper Moon (1973) ? I kind of regard it as a sister film to The Last Picture Show, both films using b/w as an artistic choice, and also directed by Peter Bogdanovich

I think that Bogdanovich went for black and white to emulate the classical Hollywood Era Westerns (Hawks, Ford, etc.) he so clearly admires. It's as much an aesthetic decision to evoke tradition and nostalgia as it is a thematic one, since the film gradually becomes about the degradation of an old way of filmgoing. I don't find the film slow really; it's certainly very deliberate in its visual flow, but its narrative is only "slow" by today's frenetic Hollywood standards.

Unfortunately, I haven't seen Paper Moon. I missed it last year when it came to the Harvard Film Archive.