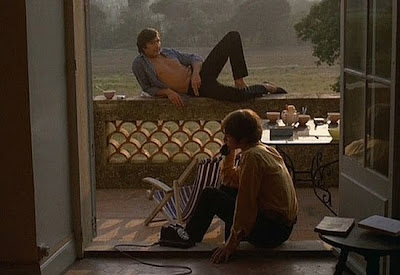 Wise and aloof, contemplative and so discreet that its nuances fly by without the most careful of observation, Eric Rohmer's La Collectioneuse defies all of the fashionable signposts of the French New Wave. It seeks to put a microscope to the affected machinations of young people, exposing the falseness beneath the facade rather than celebrating the art of role-playing. The film was the third entry and first feature-length work in Rohmer's Moral Tales, a series built around the trope of a male character involved in a relationship being tempted by an auxiliary love interest/sex object, all the while self-consciously testing his own moral code, making an elaborate psychological game out of the potential for infidelity. Here, that figure is Adrien (Patrick Bauchau), a dangerously suave and judgmental art dealer who skirts to his friend Rodolphe's countryside villa with the straight-faced hipster Daniel (Daniel Pommereulle) in an attempt to reach a state of total nonintervention in life. He finds his courageous act of stasis to be a "better contribution to mankind than working", so he trudges around the picturesque French estate passively reading books, walking aimlessly around the grounds, taking early morning dips in the ocean nearby, and lounging in the blank bedroom that has been appointed to him by Rodolphe.

The men's inertia is threatened by the presence of Haydée (Haydée Politoff), a young, unflappable free-spirit that catches Daniel and Adrien's unawares when they discover that she is also spending vacation time at Rodolphe's place. Haydée abides by a schedule opposite to that of Daniel, whose pursuit of an ascetic lifestyle allows for no nightlife. At first, she's but a fleeting phantom, leaving only traces of her uninhibited but not unusual flights of twentysomething recreation, but eventually, in their disengaged voyeurism, the men start to take note of her allegedly worthless and hollow male visitors. Desperate to put an end to their feelings of inferiority, yet always concealing any wiff of jealousy or desire, Adrien and Daniel begin to make offhand stabs at communication with Haydée, eventually forcing complacence upon her. They start to incorporate her into their activities, never failing to suppress their brutally specific criticisms of her, calling her a "miserable specimen", a "slut", and a "collector" of lovers with the kind of casual delivery that would suggest they really think their judgments are the final say. Despite their linguistic prowess and lofty existential concerns, these men are deeply malformed. Their immaturity is revealed in great swathes of behavioral idiosyncrasies, which Rohmer, attentive as ever even in this primitive stage of his career, holds an unblinking eye to: note Adrien's awkward picking up and putting down of the telephone after Haydée uses it, or his neurotic biting of a rock to displace the conversational tension with her during one scene on the beach.

Adrien's hyper-articulate, context-heavy narration guides the dramatic action and offers an additional layer through which to scrutinize the discontinuities between thought and behavior, principle and impulse. Rohmer's leading males are so self-assured, so certain that they are following the proper path, that it's easy to fall into a trap in which they appear righteous and sympathetic. Yet as much as Adrien frames Haydée's day-to-day behavior as manipulative, as if she's playing a game with his emotions by sleeping around with Daniel and others, it's really Adrien who's the weasel, feigning affection and then slipping away with the exacting care of a great dictator. Late in the film, he practically whores Haydée out to an American art dealer (a menacing, Sean Connery-esque Eugène Archer) by dropping her off at his house for two days, effortlessly making it a perverse part of his master plan of directing Haydée's attraction to him (and somehow it works, if only temporarily). While Adrien speaks internally of his dominance of the social situation, the onscreen action tells a different story. The American picks apart Adrien's pretensions of passivity, making him look like nothing more than the lazy narcissist he is (any shades of virtue in Archer, however, are stomped out like a cigarette when he childishly slaps Haydée for breaking a valuable vase). 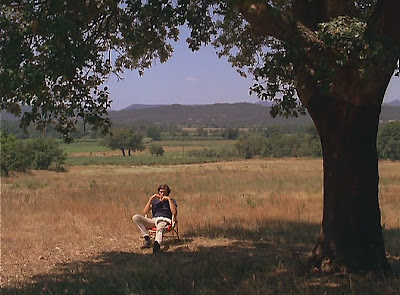 La Collectionneuse marks Rohmer's first collaboration with cinematographer Nestor Almendros, whose exquisite eye instantly became an inseparable element of Rohmer's work. The sparsely gorgeous, summery color compositions which reached their fullest force in Claire's Knee are already in evidence here, contributing a mood of languid relaxation. In keeping with a reductive principle borrowed from the minimalism of Bresson, Rohmer strips most of his images of any extraneous objects, ultimately discovering a common pictorial rhythm with a burst of each primary color in almost every shot. Shooting in wide shots that feel both composed and tossed-off, Rohmer and Almendros capture with the gift of natural light images that possess the warm hues and palpable textures of a great painting; often times the soupy early evening skies seem like painted backdrops, a la Powell and Pressburger's Black Narcissus, yet somehow they maintain a weighty realism. Rohmer suspends his characters in such wondrous environments that it's an even greater tragedy that they're so preoccupied by petty concerns.

In fact, this constant, overwhelming presence of natural beauty is a humbling reminder to the viewer that there are larger, purer forces than the characters' pseudo-romantic ploys. If the people in La Collectionneuse are evasive, complex, and impenetrable - the sudden tonal shifts in many of the conversations are beguiling - the landscape that they occupy is uniform and majestic, a tension that levels the film with a mesmerizing consistency. Crucially, Rohmer never dips into judgment himself, instead letting the moral dimension of the film rest somewhere in between his own stance, that of the characters, and that of the viewer. To cement the open-endedness, Rohmer has Adrien return to a state of zero by the end of the film. After renouncing his infatuation with Haydée once and for all, he considers himself to be at last capable of utter freedom, finally stripped of any unwanted temptations. But quickly he realizes that he's plagued by anxiety, that the illusory rewards of his self-confirming victory were only temporary. Perhaps he has solved his own predicament by realizing that aspirations to nothingness are simply illogical and that there's no joy to be obtained from a life of social and existential apathy. In doing so, he has allowed Rohmer to emerge from a perplexing and revealing dive into the male psyche.
Posted by Carson Lund at 2:49 PM