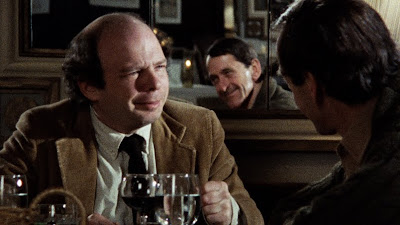 At one point during the long, enthralling, unpredictable conversation between theater professionals and long-time acquaintances Andre Gregory and Wallace Shawn, the two embark on a the perplexing question of whether or not art can still move people to change their lives. The inquiry revolves around two sides: Wally's belief that the revealing of life in all its banal, meaningless totality can wake people up to its fundamental shortcomings, and Andre's rebuttal that such subtle maneuvers aren't good enough any more, that people must be taken well out of their comfort zones and experience something entirely unexpected, an idea he analogizes to being atop Mount Everest. As if by some magical sleight of hand, Louis Malle's My Dinner With Andre, the deceptively nondescript cinematic experiment that contains this talk in 110 minutes, finds a middle ground between these two poles by taking us into the heart of cosmopolitan NYC for a seemingly bland and routine dinner yet also to the top of Mount Everest, into surprising territory where the realization of mundanity and the pursuit of transcendence go hand in hand. The unspoken answer offered by the film is that yes, art can change lives. Or at least it can lead people to consciously think about their lives in a way that encourages change.

As the film's scenario begins, Wally (that guy whose distinctively helium-headed vocal delivery pops up in small doses in all sorts of middle-of-the-road Hollywood fare from Toy Story to The Princess Bride to The Incredibles) is the struggling playwright and no-nonsense pragmatist while Andre is the experimental-theater-director-cum-enlightenment-seeker who sprays his New-Agey mysticism at Wally with giddy, seemingly endless intensity. The thoroughly complementary nature of their characters, which naturally extends to their physical statures (Andre's lanky Bergmanesque frame, Wally's frumpy pudge), at first seems too easy, but the question arises by the end of the film as to whether or not their perspectives remain so dialectical. My Dinner With Andre, obviously, is a film about conversation, but it reveals its subject on a Rohmerian scale; it's about the ways in which the bouncing of ideas can open up new and hitherto unexplored pathways of thought, and the way that talking and talking and talking can actually pervert an initial, intended idea rather than crystallize it. Wally, who is ostensibly the film's protagonist if only because his interior monologue bookends the central conversation, is not looking forward to his dinner with Andre, who he has heard is in a funk after a rabid succession of journeys around the world and his mother's death. Yet the act of talking, at first casually and superficially but ultimately with deep introspection, is able to reverse his preconceived notions of this obligatory meeting with a past colleague. Through eye contact and listening, the unavoidable is quickly made vital, the disposable made eternal.

Andre, the well-spoken lad who chose the timeless, upscale restaurant where they meet, is off to the races about his various encounters with exotic peoples and bizarre rituals the moment they sit down. An experiment in acting with 40 singing-and-dancing professionals in the dark woods of Poland, a retreat to an esoteric community of insect communicants in Scotland, an absurd adventure through the Sahara Desert with a Buddhist monk; Andre recites these stories with alarming clarity and detail, as well as an exterior assurance that would belie his emotional turmoil. For a majority of the time, it's almost as if he'll never stop, and Wally just listens and adds the temperamental "um-hmm" or "So what did you do next?" Andre is so relaxed playing himself that the experiment of self-replication acting that he describes passing on to his 40 Polish comrades appears to be the thesis behind his own stunning naturalism in the part. It's not a matter of merely sitting in front of the camera and behaving normally; Andre and Wally spent months performing and refining the script of their conversation in various locations, thus the film is a document of two people's contrived representations of themselves. 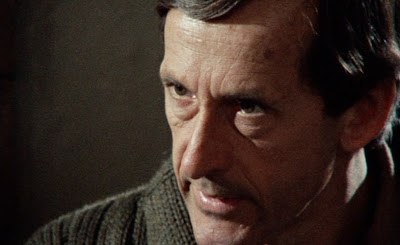 For nearly half the film it's almost as if the same image of a contemplative, attentive Wally was simply inserted hastily from time to time to break up the extended showmanship of Andre, but slowly Wally reveals his own agency. Chomping at the bit to provide a counterargument to Andre's admittedly one-sided and privileged view of "truly living", Wally finally claims an opportune moment to launch into a celebration of the smaller, less glamorous pleasures of quotidian city life (a mode Andre finds dangerously "Orwellian"). Suddenly the dynamic of the conversation has taken a drastic 180 degree turn, with Andre, glanced frequently through the mirrored walls behind their table, offering generous nods and chuckles and only the occasional input. It is not long before their conversation has veered off entirely from the specific and into the abstract, a discursive string of unsettling philosophical arguments about reality, perception, love, and communication itself. Yet, ever so delicately, Andre and Wally maintain their casual naturalism, the sense of two Manhattanite intellectuals catching up on lost time, never falling into easy academic platitudes.

Malle captures it all (perhaps one of the least exciting scenarios possible from a cinematic/directorial standpoint, but Malle was always up for a challenge) with wise restraint and aloofness, limiting his restaurant set-up to a two-shot, close-ups, reverse angles, and the occasional imperceptible dolly move. But, to fall back on the cliche, the talk is what matters. There is very little that makes My Dinner With Andre very cinematic, but then again it shares none of the theater's showy overstatement, or even the performative spectacle of Andre's own real-life Manhattan Project. Its sense of camaraderie and realism are decidedly unshowy, and its demanding, thematically dense script bursts apart the scenario's pedestrian simplicity. Most of all the film is a one-off in the purest sense of the term: resistant to replication or homage, it defies categorization.
Posted by Carson Lund at 10:01 PM

You frame up this film's better points and its limitations cinematically. I think the film's finest moments are when Wallace finally provides his rebuttal. Things finally get heated at that point and the discussion goes to a place of unsettled argumentation. Most of what Gregory goes on about is very pretentious stuff and it goes on and on. Shawn brings the film down to earth in the latter stages nicely.

Thanks Jonny! I agree that the film is most effective, and quite moving, when Wally starts to chime in later in the film and they start engaging in a back-and-forth dialogue. That's when the chemistry really picks up and the most exciting concepts are raised, although I do still very much enjoy the beginning with all of Andre's vivid tales. His attitude throughout is pretty condescending, for sure, but I'm still perversely drawn to all these fantasies of mystical enlightenment that he discusses. I'm simply interested in the kind of balls-to-the-wall travel he indulged in.

Good review. I had to see this in small doses, as it was too much in one sitting. It is frustrating to me that they speak so quickly, as it leaves no time to think about what they are saying before they move on in the conversation.

Maybe it would have been more suitable on the radio or as a book, as there is so little camera movement. I admire the experiment, but it doesn't feel like a film script, but a book. Then again, the advantage of film is showing their facial expressions and reactions.

"the bouncing of ideas can open up new and hitherto unexplored pathways of thought" Good point, that is so true.

I didn't know they spent months rewriting, did feel a little contrived, I have to admit.

Thanks for the comment. As for the issue of the cinematic medium, I think it's out of the question. No other medium could give the authentic sense of time passing and of two people actually sharing a real-life conversation than film. A book or radio performance, I think, would amplify the already dour academic tones of the conversation and make them somewhat unbearable. The opportunity to watch Andre and Wally's nuanced facial expressions and subtle inflections in tone is key.

I guess the advantage of a book version would be you could mark interesting passages of the text.

True enough, the facial expressions are lost in a book to some degree(but not completely if the descriptions are good)