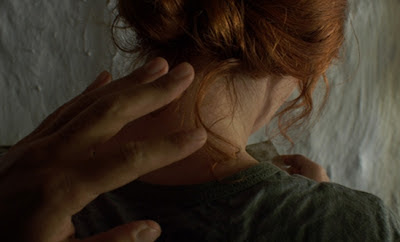 The Loneliest Planet (2011): At 42, Julia Loktev is a really brave and confident filmmaker. I know this because she banks the entire success or failure of her second feature (well, Gael Garcia Bernal's presence was probably a bit of a safety net, but still) on a single 3 or 4 second gesture in the midst of the only sudden spike of concrete stakes in the film, a moment that is paramount to the emotional arcs beforehand and after. Without this brilliant paradigm shift, The Loneliest Planet might have resembled a mere pale imitation of its closest aesthetic cousins: Kelly Reichardt's Meek's Cutoff and Gus Van Sant's Gerry. With it, Loktev transforms a film that is superficially just a collection of shots of a young married couple being guided through a hiking trip in the Caucasus Mountains into a profound – seriously, profound is about the only adequate word to describe this – study of the narrow line between thinking you know someone on an intimate level and realizing you don't in fact know anything. Loktev's uneasy, hard-cutting sound design and languorous visual rhythms are simultaneously entrancing and uncomfortable, and once the decisive moment comes, the tension that the rest of the film spends slowly, organically diffusing is nearly unbearable. As close as the Reichardt and the Van Sant movies are to my heart, neither of them shook me up on a visceral level quite this much.

His Girl Friday (1940): My clear favorite of the Hawks films I've seen (I haven't seen nearly enough for this preference to hold any water), His Girl Friday is thrillingly energized and politically incorrect, combining a satire of cynical hard journalism and a comedy of remarriage in adventurous ways. Hawks' sense of humor here is bracingly dark, particularly in an extended set piece that comprises most of the film's second half when a death-row inmate hides away in an office desk while Cary Grant, Rosalind Russell, a horde of fast-talking newsmen, and very skeptical law enforcers prattle on in competing directions, their voices overlapping with the fervent intensity of the dialogue in Bringing Up Baby. The gravity of His Girl Friday grows from the knowledge that death is looming just around the corner, ready to intrude on the plot's maniacal accumulation of facts, speculations, and exaggerations, and indeed it does at one point, catapulting a dismissal as brisk and no-nonsense as Hawks' filmmaking. When the eventual reuniting of Grant and Russell as lovers does occur in the final five minutes atop the first instance of non-diegetic music in the film, it collides awkwardly with Hawks' calculated tone throughout, but aside from this minor hiccup the director never allows a second for sympathy, or even an understanding of this seemingly amoral professional environment, to develop.

Midnight (1939), The Philadelphia Story (1940), The Lady Eve (1941), and The Palm Beach Story (1942): Does distance make the heart grow fonder? Each of these films sets out, at least partly, to tackle that question by separating their central lovers for a substantial portion of their middle sections. Ultimately, it's the two Sturges films that come closest to proving the old adage, if only because they approach an unanswerable curiosity with the batty sense of logic necessary to access it, while the Cukor and Leisen films reach for finales of romantic grandeur that are not fully warranted by their uneasy mixes of cynicism and corniness. I get queasy when The Philadelphia Story pairs its borderline misogynist attempt to "correct" Katharine Hepburn's star persona with an elegantly shot but insincere late night swoon between her and Jimmy Stewart (the romance is tampered by the sensation of Cukor putting Hepburn in her place), or when Midnight's errant couple (Don Ameche and Claudette Colbert) crescendos to marriage despite an hour-and-a-half worth of separation and bickering (sure, to an extent this is what screwball comedy is about, but Ameche and Colbert never once look like they're having fun together). On the contrary, I can't help but smile at Sturges' simultaneous embrace and mockery of romantic comedy tropes, nowhere as hilarious as the shot in The Lady Eve of Henry Fonda and Barbara Stanwyck building to a climactic kiss while a horse butts its head into the frame.

Argo (2012): Argo’s confused, ultimately myopic perspective shines through in its clash of tones. Affleck is clearly at home during the scenes affectionately mocking the movie business, but when he has to swiftly cut back to injustice in Iran to service the narrative, he resorts to leaden orchestral drones and hectic imagery of throngs of gunslinging, hell-raising Iranian dissidents. It’s possible to make the case that Affleck is deliberately pointing out the frivolity of an industry that can so casually muscle up the capital for a fake product and quite possibly know nothing about the conflict they’re helping alleviate, but the delight he takes in representing these quick-witted, narcissistic producer figures clearly overshadows any stab at social commentary. Affleck casts himself as the CIA hero, which is telling: this is a self-congratulatory celebration of how witty, persevering, and sensitive we Americans, and especially those Hollywood types, can be.

Saraband (2003): See my updated Bergman list for my thoughts. 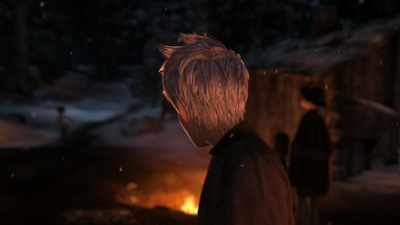 Magic Mike (2012): Seeing this again, I was struck first by how great it is (perhaps even better than I initially gave it credit for being), and then by a couple details I hadn't explicitly noted in my earlier review. One thing is Soderbergh's tic of composing his characters in the lower half of the frame in expansive medium shots, letting large areas of activity dance on top of and around the ostensible focal point. We see this most memorably when Tatum and Pettyfer flirt with the birthday girls at the night club early on (the frame at this point teeming with party lights and people), and in a later, comparatively tame moment when Tatum and Horn are having a beer in front of a go-kart course. In these instances, Soderbergh treats the eye to the spatial context of his characters while also rendering them insignificant in their larger landscapes. My other takeaway was how emphatically the film reverses Laura Mulvey's Male Gaze theory, particularly in Horn's first trip to the stripclub, where for an unusually extended period of time she scans the stripper routines, her blank, slightly smug expression providing a possible entry point into identification for female viewers.

Jiro Dreams of Sushi (2011): I nearly beelined out of my apartment at 1 AM in search of LA's best sushi when the credits for this scrumptious-looking documentary began to roll. The greatest pleasures of Jiro Dreams of Sushi – and this could be a good or bad thing, depending on your expectations – are the frame-filling close-ups of shimmering sashimi wrapped up by master chef Jiro Ono, an 85-year-old workaholic with Ozu-like levels of quotidian precision and no plans of retirement (sidenote: I've always admired this distinctly Japanese sense of humility and determination, and this film is a showcase for it). On a primal level, director David Gelb's film is a sustained romance with what I can only assume is his favorite food, replete with images of fresh fish, tanks of unidentified saucy concoctions, and select, high-paying groups of adoring consumers. The whole thing is set to bittersweet Max Richter tunes that underscore the sad truth of food movies: the actual food is out of reach, the screen impervious to our desire for a taste.

Mean Girls (2004): Once upon a time I was a cynical middle school student who held an uninformed prejudice against Mean Girls because everyone else at school liked it. I recently got around to catching it on the satellite TV programming of a Virgin America flight (because all the on-demand features, including the so-called foreign ones like Damsels in Distress and To Rome with Love, would cost me more than it sets me back to watch a studio picture in a theater these days), and I was pleasantly surprised, feeling a sensation in the gut in which I realized all the ways I've grown (and not grown) since 2004. The movie, directed by some guy named Mark Waters and, more importantly, written by Tina Fey, is surprisingly sharp, honest, and quotable even when it's trafficking – self-consciously, of course – in all the overblown clichés of high school life that I so vehemently despise. So, whatever, it's pretty good. But the sappy final thirty minutes do threaten to spoil all of Fey's prior commentary, so that's a fairly damning blow against it.

Rise of the Guardians (2012): In the realm of kiddie animation, I go to Dreamworks for their usual stark contrast to the monolith of "prestige" that is Pixar: their fun and unapologetic genre pastiches, their nods to the complexity and wealth of possible human behavior, their forward-thinking and often decidedly unreal digital animation, and their occasionally sophisticated sense of humor. Of course, they do allow plenty of duds in the mix, and Rise of the Guardians is one of them, weirdly fascinating and visually dazzling though it may be. The film borrows the cut-and-dry fatalism, black-and-white worldview, and cornball sentimentality of Pixar, finally dumping its antagonist (who's only fleetingly humanized) down a black hole to hell and elevating its group of iconic protagonists to saintly levels because of their steadfast belief in mere hope illogically conquering darkness (a concept that makes less and less sense in today's world). Still, I like how the film brings new shadings to archaic holiday myths, such as how it renders Santa as a tattooed Cossack or how it playfully suggests that all fantastical figures work together in a sort of capitalist framework that can actually fail if business dwindles (how's that for holiday cheer, kids?), and I especially like the film's robust visuals, which luxuriate in wintry textures and hazy pillows of light that are simultaneously magical and naturalistic. No wonder Roger Deakins was the visual consultant on the film.

I am an avid reader of your blog. I came across it a few weeks back. I am from India and I got into films recently. I enjoy films by Kubrick, Tarkovsky, Dreyer, Bergman,Tarr and Bunuel to name a few. However I was very surprised to see that your blog has no mention of the great Indian filmmaker Satyajit Ray!

Did you ever see Day Night Day Night, Carson? I thought it was really tremendous. Similar to how you've described The Loneliest Planet here, it's a taut study in tension and not-quite-release, pivoting on a single action, although (at least as I recall) pitched almost entirely at a gritty, heightened state of alert. Loktev has been on my radar ever since, and I've been anticipating Planet quite a bit; it starts here in Atlanta on Friday, finally. I'm really looking forward to it.

His Girl Friday is one of my favorites, too. If you ever get around to The Criminal Code (which I would recommend as one of the more underrated from Hawks' earlier period; nothing major, but tough as nails) there is some really fun experimentation with the overlapping dialogue technique early on in the film.

I'm starting to hear really good things about The Loneliest Planet. I really like Meek's Cutoff and Gerry and am convinced this is a film I must see.

Sauradip, I am well aware of Satyajit Ray but unfortunately I have not seen any of his work yet. This is something that must be corrected, I know. Thanks for reading!

Drew, I haven't seen Day Night Day Night, but I've heard about it. It sounds really intriguing, though the premise seems a bit sensationalist in comparison to The Loneliest Planet's ambiguous stakes. Let me know what you think about TLP when you see it.

I'll check out The Criminal Code when I get a chance.

Jon, it is a film you must see. See it at all costs!