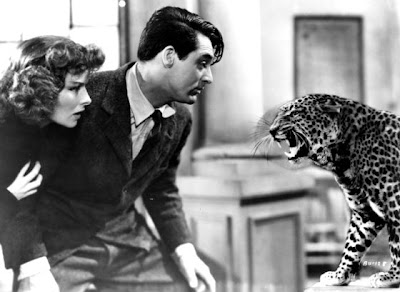 In Bringing Up Baby, Howard Hawks delights in introducing zany element after zany element, an accumulation of absurd details so overwhelming that it's a wonder he manages never to lose sight of the film's fundamental dramatic and thematic goals. A tame leopard, a pending $1 million museum donation, a missing Brontosaurus bone known as the intercostal clavicle (this being a screwball comedy, a term that receives its fair share of repetition), a yapping dog that likes burying things deep in the ground, a rural circus and the wild leopard it mistakenly lets loose, and plenty of other details compile around the central comic entanglement of David Huxley (Cary Grant) and Susan Vance (Katherine Hepburn). David's a prudish, even-tempered paleontologist with an impending marriage to a professional assistant that's destined to develop into a passionless coexistence, as well as a four-year-in-the-making dinosaur sculpture waiting on one last elusive bone. Susan's a prickly, siren-voiced, and utterly selfish ditzy woman gone madly desperate for love. Hawks creates two people so totally opposite that the increasingly surreal series of events and parade of oddness they collaboratively produce feels like a natural extension of the void existing between them.

This void is at first deepened, then detailed, and finally eliminated through Hawks' construction, a series of combative circumstances and childish games ever escalating in absurdity and dramatic stakes. In the early stages of the plot, mistaken identity plays a pivotal role in the combat between Grant and Hepburn. David first runs into Susan on a golf course where a mix-up occurs regarding the question of who possesses a certain golf ball that has strayed from David's hole onto Susan's. David insists that it's his, that he took a faulty swing, while Susan is insistent upon continuing to play with it. Moments later, she tries to leave the parking lot in his car, clumsily bumping other vehicles as she leaves the parking space in front of David, who pleas in irritation. Susan is plucking the objects of David's lifestyle away from him right before his eyes. If the external markers that come to define these characters are this impermanent, this liable to shift at a moment's notice (indeed, later on the very names of these characters are hilariously called into question), then the identity that they embody must be too. Hawks is aware of the duplicity of identity, the fact that humans are mere vessels for a shifting variety of potential selves that are brought about through interaction with the public world.

Susan's theft of David's possessions is passed off as unintentional yet feels oddly calculated, as if the beginnings of a compulsive longing towards David that expresses itself as the film progresses through increasingly over-the-top acts of selfishness and dependence. As outlandish, manipulative, and seemingly mean-spirited as it gets, Susan's behavior is bent on a single goal: keeping David in her company. That need is acted upon throughout in the form of conflict, which Susan explicitly refers to as being the fundamental expression of human love (though she's accusing David of creating this conflict, it's clear that it represents her inner mantra of flirtation). In order to give David a reason to be by her side, she pretends over the phone to be getting attacked by her aunt's pet leopard (the titular "Baby," which she has just been asked to temporarily care for). From there, the film proceeds in similarly loony fashion, with Susan constantly creating circumstances of a problematic nature for David so that he will be forced to spend time with her; to name a few, she parks in an illegal space in his car, she steals the adjacent vehicle, she misplaces his clothing, and she lets her aunt's dog George get a hold of and subsequently bury the intercostal clavicle. It's an awfully selfish set of actions for a character to perform, and a strange movie ploy in general, but Hepburn brings a sense of overwhelming romantic desperation to the part that prevents Susan from becoming merely a sadistic bitch. 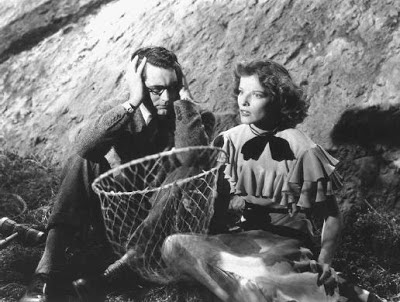 David's goal the whole time is to recover his bone and retrieve the $1 million he had coming to him for his museum, but every time his tasks seem on the cusp of being accomplished, Susan steps in and throws a wrench in the operation. It certainly doesn't help his case that Susan's Aunt Elizabeth (May Robson) happens to be the wealthy women behind the hefty donation, and her lawyer, Alexander Peabody (George Irving), is one of Susan's good friends. What this means for David is that he has to prove to these people that he is a worthy recipient of the money while being pushed to the brink of aggression by Susan. The role of chance, such a powerful factor in the sorting out of this situation, is materialized by the traveling circus that is passing through Aunt Elizabeth's rural Connecticut town. If Baby can be said to represent a surrogate child for David and Susan – who amount to a surrogate marriage over the course of the film – then the search for the misplaced Baby and subsequent failure to recognize the right animal when presented with a wild leopard released unintentionally from the circus illustrates just how profoundly unprepared either of them are for any kind of serious adult life. Likewise, the constant roles they are forced to play, the childish games they find themselves involved in, and the lies they tell in order to avoid confronting any sort of deeper truths about themselves or about their situation, suggest the impish, chaotic lifestyle both of them seem prone to – naturally so for Susan, and perhaps beneath the surface of David's pragmatic exterior.

This move from adult responsibilities to childish tactics is mirrored by other key structural progressions in Bringing Up Baby: the move from the suburban to the rural, from day to night, and from social order to disorder. Everything in the film follows in tandem: as more craziness is dumped into the plot, the day gets longer, and the characters progress further into the dark forest in search of their leopards (shall I say, their structure?). By the end of the night, nearly all of the characters have found themselves in jail cells, and though Hawks finds a hilarious narrative justification for it (they're all recoiling from the encroaching leopard), the metaphor is about as blatant as metaphors come: not only does Susan get herself in trouble with her bewildering behavior, she also manages to swallow up everyone around her in her mad pursuit of love, which runs counter to any of the conventional methods and laws of the public world. Indeed, the success of her pursuit (and of David's) is reliant upon her(/his) ability to break from the structure of her(/his) life. 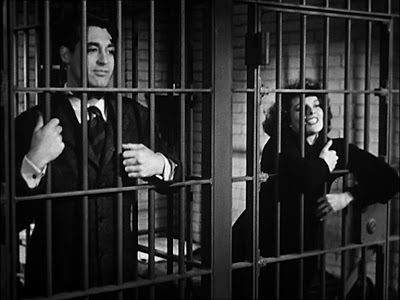 After all the dizzying layers of symbolic game-playing, there comes a beautiful shot in the final scene of the film that that suddenly crystallizes what was perhaps only vaguely visible through the overlapping chatter of Hawks’ high-velocity filmmaking: Susan breaking through David’s dinosaur and David saving her by grabbing her hand, refusing to let her fall into the rubble, a perfect visualization of a relationship that is simultaneously parasitic/destructive and productive/vital. Susan’s been clinging to David throughout the film, destroying his comfy complacency, yet the aspects of her character that so sharply contrast his persona are also the forces that agitate his sense of self and usher him towards a (potentially) "better" happiness. The bricks and mortar of Grant’s previous regressive lifestyle – after all, he's an archaeologist for God's sake, digging up bones! – have been replaced by something new, a hesitant embrace of the chaos and spontaneity that Susan represents.

But this embrace is about something less specific and less trite than love. The conclusion of Bringing Up Baby has been lambasted for the abruptness of its seeming dramatic shift – that David suddenly admits to loving Susan. However, the word "love" emerges from David out of what appears to be practical impulse: a desire to influence Susan to either get off the precarious ladder or take his hand – ultimately, to resign to safety. Yet it is significant that this is one of the few scenes in the film where Hawks shows David actively looking out for Susan's best interest. He has come around to her in some way, but how? Is he acknowledging the strangely absorbing, major influence she's had on his life? Is he, to put it simply, greeting the fact of his vulnerability? To the same extent that Grant’s final, falling-out-of-the-mouth “I Love You” is less a true statement than a verbal placeholder for a major shift within himself, Bringing Up Baby traffics in all sorts of external presentation that it proves not to be fundamentally about. In Hawks' film, everything stands for something, a dynamic alternative to a man who has built his life around empty markers of contentment.