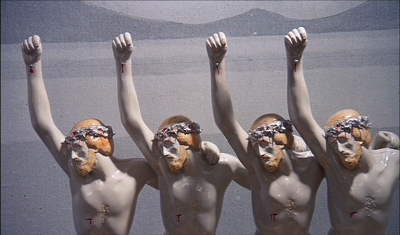 The Hobbit (2012): For what it's worth, I slouched into my cushioned seat with, if not quite the level of giddy excitement I sensed floating around me, then at least a considerable measure of anticipation for Peter Jackson's inevitable return to the most lucrative Middle Earth ever conceived, but once The Hobbit began, that feeling faded as quickly as the blockbuster director plunged from his distinguished ranks upon releasing two widespread disappointments after his successful trilogy (King Kong and The Lovely Bones). Looking back at 2012, it's hard to think of a more aimless and phoned-in Hollywood epic than this film. Jackson's oddly synthetic vistas – which take computer-generated imagery to its ugliest extreme – manage to overwhelm even the built-in charm of the Tolkien world, reducing it to flawless screensaver backdrops for disconnected figures to frolic in front of. (To this end, I didn't see the film in 48fps, but judging by the initial notices, I suspect this sped-up frame rate would have only exacerbated the artificial quality of the images.) Meanwhile, by jumping back in time to a pre-Frodo landscape, Jackson merely spends three hours building to supposed plot revelations that are either already well known or feel overly familiar (i.e. Bilbo gets the ring from Gollum, Gandalf oversees a powerful sword, Sauron angrily awakes). Beyond an occasionally amusing fairy-tale tone that yields some musty dwarf humor, very little is new or unexpected in this lazy cash grab, which, despite flailing about in a directionless fashion for most of its running time, paradoxically manages to feel as if it ends prematurely.

Skyfall (2012): In Skyfall, James Bond must reclaim prized information from and put a stop to an embittered fellow agent who's trying to air his dusty old grievances towards his prior female boss, in the process leaving innocent people in his wake, blowing shit up, and generally wreaking havoc on society. Again, just so that he can watch the helpless life drain from his old superior's eyes. $200 million was spent, the brightest Hollywood craftsmen were hired, and public areas of multiple international cities were temporarily closed down in the making of this film, all for this cruel and pointless plot which has now fostered one of the biggest entertainments of 2012. I'm reminded of Christopher Nolan's Inception and the way it hinged upon petty dramas (Cillian Murphy's daddy complex, the romantic failings of Leonardo DiCaprio) seemingly only to justify and provide dramatic stakes for its conceptual and technical spectacle, as if athletic bodies moving rapidly through space need "emotional depth." These are films that seem afraid to admit that they're just action movies. Here's the thing: with a chase scene through claustrophobic Bazaars, a fistfight atop a fast-moving train, a shot of a character soaring down a waterfall, and a final showdown featuring helicopters and explosives, Skyfall is most definitely an action movie, and not a particularly original one.

Tim and Eric's Billion Dollar Movie (2012): I definitely have a threshold, as I assume many people do, for Tim Heidecker and Eric Wareheim's singular brand of absurdist comedy that varies slightly according to my disposition and the social environment I'm in while being exposed to it. It's fairly well known that there's a particular environment that...well...lends itself better to their work. I'm pretty certain it's not a theatrical setting, but nor should it necessarily be a solo venture. Nonetheless, I treated myself to a viewing of this bonkers achievement completely by my lonesome, and I have a feeling that some of its impact may have been hampered as a result. Part of the greatness of Tim and Eric is that they willingly inspire a variety of responses running the gamut from disgust to ambivalence to cultish enthusiasm, and therefore the tension in a room of people watching their comedy can play gloriously to its advantage. Anyway, this is all a roundabout way of saying Tim and Eric's Billion Dollar Movie wore out its welcome about 40 minutes in, and the fact that I was braving this thing alone seemed to prevent me from hanging on during the more trying digressions. Still, to its credit it has some of the funniest scenes and moments I've witnessed all year, most of which are too elusive and outright strange to put into words here.

Flirting with Disaster (1996): David O. Russell has always been at home with chaos and idiosyncrasies, with the eccentric spirits and side-plots that pepper the edges of his narratives. His second feature, while not quite the full realization of zaniness that marks I Heart Huckabees, Russell's most representative work (not of his filmography, but of the anarchic sensibility I've always felt brimming out of his three-act structures), nonetheless strikes a fine balance between off-kilter mayhem and an overarching conceit. Mary Tyler Moore, George Segal, Alan Alda, Lily Tomlin, Celia Weston, and David Patrick Kelly are all hilariously unstable as a neurotic Ben Stiller's would-be parents, and their supporting turns show Flirting with Disaster at its outlandish best. They're so strong, in fact, that the film loses energy and authenticity when it places emphasis on Stiller's slacker dramatic arc (his search for identity (his real parents) and stability (love)), and particularly when it resolves its combustible threads at the end with Stiller choosing his traditionally motherly wife (Patricia Arquette) rather than her adrift and lively foil (Téa Leoni). It's an affirmation of domesticity that seems to run counter to the fluid, eccentric worldview Russell appears to otherwise embrace.

Lolita (1962), Clockwork Orange (1971), and Barry Lyndon (1975): Revisiting these three Kubrick masterpieces at LACMA over the past few weeks – as well as visiting the museum's overwhelmingly comprehensive exhibit dedicated to the director – has constituted what I guarantee will stand out as one of my most memorable cinematic experiences of 2012, even during a year in which I attended Cannes and AFI. As my October tribute should already testify, I'm still a worshipper in the church of Stanley Kubrick, and having never witnessed his work on a big screen before, these screenings were something special. Lolita proved to be a far richer and funnier transitional film than I initially gave it credit for, anticipating with its barely concealed sexual innuendo and operatic performances much of what was to come for the director. In A Clockwork Orange, I was mesmerized by a complex and unresolvable ideological landscape that never quite struck me in my younger years as viscerally as it did now. And Barry Lyndon more than justifies its high ranking for me as one of the grandest and most beautiful of Kubrick's films in its ideal setting. So enveloping are its painterly images and exacting rhythms on a towering screen that I found myself emotionally wrecked by the end.

Silent Mountains, Singing Oceans, and Slivers of Time: Six Films by David Gatten: The intellectually dense materialist cinema of David Gatten has been my favorite discovery this year, thanks largely to a traveling retrospective that hit many of the country's major cities throughout 2012. This collection of films spreads throughout Gatten's major continuing project, Secret History of the Dividing Line, as supplementary experiments and tangential directions in the filmmaker's broadening array of conceptual explorations. From 1998, What the Water Said, Nos. 1-3 is the earliest venture in this program, and it is echoed in 2007 by Nos. 4-6. Comprising 33 minutes of Kodak film stock ravaged in varying ways by the tossings and turnings of the ocean, these works forgo Gatten's typically handsy approach in favor of a complete sacrifice to the artistic force of nature, ultimately offering a radically unconventional "document" of the sea that superficially resembles Brakhage's scratch films arrived at from an opposite pole. The two Film(s) for Invisible Ink (from 2006 and 2008, respectively) dive into serene minimalism to directly investigate a core concept running through Gatten's filmography: the relationship between the filmed image and the organic, shifting surface image (scratches, dust, hairs, etc.). (Note: the second part contains the most beautiful rack focuses I've ever seen, hands down.) Finally, Journals and Remarks (2009) and the two-part Shrimp Boat Log (2006/2010) are more conventional documentations of time, place, and texture, looking quite distinct from the rest of Gatten's work with their color photography and deceptively simple approaches. Still, a closer look at the origins of their making reveals more conceptual/structural gimmicks and heady ideas, which are the crux of Gatten's work.

I don't think The Hobbit was that bad, but it was an hour longer than it needed to be. I think Jackson is setting up what could be a powerful story involving the Necromancer of Dol Guldur, but how well this epic will mesh with the lesser dragon plot is hard to say at this point. My review: An Overextended Journey.