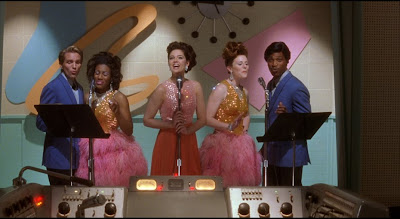 I had this email exchange with my friend Eric Bolton about David Lynch's stellar Mulholland Drive over the past few days. It was his first time seeing the film (he'd been mulling over a copy of it I lent to him at least six months ago), and he wouldn't consider himself a cinephile or anything, but to my surprise he was enormously impressed by it. Our resulting email chain, though not really formal or all-encompassing in the slightest, is at least somewhat of a cursory examination of the film for a first-time viewer. These are the confounding emotions that are immediately present with Lynch.

EB: I have some questions about Mulholland Dr.

I think I get the gist of it in that the first 2 hours or so are Diane's fantasy as opposed to the terrible life she is shown to really have in the last portion. As with any fantasy, it can't exist completely, parts of reality escape into it and at the end, it comes crashing down to reveal Diane's real life in which she is an unsuccessful actress, and her love is unrequited by Camilla, who she in turn plans to have murdered. Obviously, it's a film that's very open to interpretation, but this is what I got out of it. Keeping that in mind, there were some things I didn't quite get the significance of (if there was any) and was wondering if you could shed some light or tell me what you think the movie "means":

-What was the deal with the blue key given to Diane by the hitman and what did it mean when she saw it on the coffee table? Was it just a signal that Camilla was killed?

-The "face" in the dream, it being shown again behind the alley towards the end, and the box that he has in the bag all really put me at a lost. Any thoughts?

-The theater scene to me was the point where the movie pulled itself apart. I couldn't really pull out any meaning or symbolism from that though. That could be one I'll just need to rewatch, but it was definitely one of the more surreal moments in the film, and seemed to be more visceral than anything. 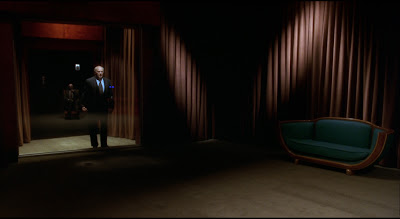 CL: Realize first of all that David Lynch (the director) is prone to surrealism, i.e he likes to include things that are hard to articulate in literal terms, but contribute something to the overall mood of the work before they have any narrative significance. With that said, I don't think anything in Mulholland Drive is completely "random" or "out-of-the-blue", which is one of the main criticisms of the movie.

The Blue Key: This is a typically bizarre flourish that Lynch likes to include (something that is pretty inexplicable and hard to pin down to one specific meaning - vague on purpose in order to elicit as broad a spectrum of interpretations as possible). The blue box that the key opens is kind of the rabbit hole of Diane's madness I guess, the anchor of reality and fantasy. As you can see, the camera usually enters it when a massive shift in the narrative is approaching. The key is literally "the key" to the different modes Lynch uses in the movie, and the item that triggers Diane's realization of her own delusions and her eventual murder of Camille. I don't think I can really explain this on-the-nose, because with Lynch a "key" is just a playful non-sequitur, since it isn't really the key to anything in particular.

Oh, the creep alleyway guy? That's even harder to give a clear, cohesive reading. But it scared the shit out of you right? In a very basic way, it's emblematic of the fear lurking behind the shadows, where you can't see it, which is in a figurative manner the whole structure of the film. Something is unsettling because we don't quite know what's wrong. Also, notice how the bum is in possession of the box. He (fear, uncertainty) is closely linked to Diane/Betty's transformation. Lynch likes to include the thing with the guy at the diner as an abstract diversion from the main story, which might frustrate some people, but it ties in at least symbolically.

The theater scene might be my favorite moment in the movie, and maybe my favorite moment in any movie in a long time. I also think it's the most important scene in the whole thing, particularly because of the symbolism at work. The performer is not really performing! It's artificial, yet it stills frightens and moves the two women, and the audience. Lynch is playing with the idea of artificiality and Hollywood fakery throughout the whole movie (throwing together random genre elements like Western ("the cowboy"), screwball comedy (the fudged assassination attempts by the hitman), horror (the alleyway guy), melodrama/detective drama (Betty's entire investigation, which is purposely kinda cheesy)). So the theater moment bluntly announces this. Lynch knows the goofy, cliched quality of genre elements, but he also knows how powerful they can be. In this way, the movie is a tribute to the power and allure of the Hollywood machine, and movies as a whole. The theater scene is all about breaking the fourth wall but remaining amazing.

Anyway, if you're interested in further reading, this is one of the most thorough, rewarding pieces on the movie I've read. It's an extremely long discussion between two critics, but it's all pretty accessible reading, and it gets at all of the mystery of the movie better than I ever could.

EB: Thanks for your insight. It was a seriously amazing movie, and has had me thinking about it since watching it. I think the Hollywood stuff in the film is hugely important to it, and while I noticed it, I didn't pay much attention to it since I don't have as deep an affection for it as you do. I'll have to watch it again with all of these things in mind.

And for the record, I really enjoy reading about movies I've seen, and read through the majority of this article. Ed Howard offered some great thoughts, but Jason Bellamy's comments were annoying to read. He seemed to avoid talking about the film at all and instead talked about broader questions. Either way, it was a good read.

CL: Yeah, Ed Howard's one of the better bloggers I know. Extremely intelligent, thought-provoking, and lucid. I like Jason Bellamy too, and I think he raised some interesting points coming from someone who was not as enthusiastic about it, but you're right that sometimes his lack of excitement, or his relatively ambivalent viewpoint, meant he indulged in broader arguments. Either way, there's some amazing stuff in there. You've seen Vertigo right? How about Kiss Me Deadly? Those are very important reference points that they bring up. 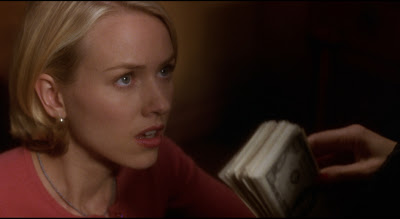 EB: I have seen Vertigo, but not Kiss Me Deadly, so all of those references sort of went out the window.

Just watched it for the 2nd time, since I really wanted to see it while knowing the general structure and get a less overwhelming viewing. Still incredible on 2nd viewing. The Club Silencio scene hit a lot harder this time. The way I interpreted it, the man comes out and plainly states that what we see is not real, and that he's able to create his reality by imagination and desire (his calling out of the instruments). This is exactly what is going on in Diane's dreamworld: what we see is all a recording, or in her head, and it's only because she can create a reality in her mind that she sees it, but it is not real. The man's statements terrify Betty and cause her to convulse, but she holds on to Rita and is in turn able to hold on to her dream for just a bit longer. Of course, the singer comes out, it seems like all is back to normal, and then she too proves that it's all a recording, and Betty then finds the key that ends this dream.

After seeing the film again, I think that among many things, it's about both how we see ourselves, how we wish to see ourselves, what we're actually like, and the differences between those. Diane's dreamworld has variable distinctions from her real life. Adam, for example, is not much different. Camilla who was in control of their relationship and generally cruel in real life was in the hands of Betty in the dream, but her general aura was not much different between worlds. Diane sees herself as ambitious, kind, eager for adventure, and talented but under-appreciated as an actress, but while she may strive for those things in real life, she is simply a broken down wreck of a human being. I think Lynch is definitely prodding us in this direction by spending the majority of the film showing how Diane wants to see herself, versus what she's actually like.

It's very difficult to talk about this movie without the proper nouns getting really confusing.

CL: Ha. Yeah, that's why it's easier to simply refer to Naomi Watts or Laura Harring, and I'm sure Lynch wouldn't mind that, as it jibes with the whole subtext of viewers being so immersed in and idolizing towards Hollywood and entertainment.

That's a pretty apt reading there in your second paragraph. You're right to say that deep down it's a character study, and like all character studies, it's effective because it's universal. It deals with actual and perceived selves, and the difficulty of reconciling both. When you get the climactic "versus what she's actually like" thing that you refer to, it's been invested with so much power. The viewer almost wants to deny that it's the real truth because it's so painful and we very well might be convinced otherwise. This speaks to the idea of wanting to really exist as your imagined, idealized self, which is a kind of self that Hollywood manufactures in large doses.

Anyway, I'm glad you saw it a second time right away. I think that's most helpful. And now that you listen to the incredible John Vanderslice tune ("Promising Actress", from 2004's Cellar Door, you can understand his bizarre diversions.
Posted by Carson Lund at 9:57 PM

Mulholland Drive is one of my favorite films by favorite director of mine, David Lynch.

The one reason I enjoy this film is that it is a maze of hidden meanings, symbolism, and other tributes to
David Lynch's own "Reality".

The blue key could symbolize the key between reality and the dream world. If you notice, there are certain parallels between this dream and Diane's reality.

The death scene of Dan for Diane, the corpse at Sierra Bonita, Adam's downhill as a director but most importantly, how Diane/Betty resembles the troubled life of Rita Hayworth.

The whole movie seems to mirror the pressures of Hollywood and success on the late actresses's life.

This is one film with no singular interpretation but instead, streams many others down the road.