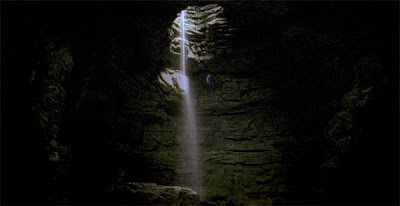 In an essay about The Exorcist, Stephen of the blog Checking On My Sausages raises a notion he calls the "horror before the horror" to touch upon the eerie anticipation of a horror film's build-up, the quiet moments before the "tawdry spectacle" kicks in. It's an idea that he likens, in a brief addendum, to Neil Marshall's critically praised 2005 horror flick The Descent, which documents the cave-spelunking vacation/adventure of a group of chatty, convivial young women that gradually coalesces into a brutal, terrifying fight for survival against ugly, slimy prehistoric cave-dwellers. Stephen's concept managed to get at precisely what I experienced with Marshall's film, a case of the supposed horror punctuation marks failing to elicit quite the level of fear and dread that the anticipatory exposition offered, even in some sense diluting the power of the precedings. To be fair, this undermines the fact that The Descent is truly very scary, through and through, and it's rightly praised as one of the decade's most effective works in the genre. But I can't help but wonder what kind of film it would have been if the horror was not materialized, if it remained purely psychological, if Marshall continued to mine the rewarding visual possibilities of his claustrophobic setting. Would it be stronger or weaker, or something else entirely?

There are ample hints towards this kind of visceral spatial and situational terror during the first twenty minutes of the group's expedition. The women - Sarah (Shauna Macdonald), Juno (Natalie Jackson Mendoza), Beth (Alex Reid), Rebecca (Saskia Mulder), Sam (MyAnna Buring), and Holly (Nora-Jane Noone) - are carefree and over-ambitious, lunging ever deeper into each new dwelling with the spunk of schoolgirls being released for recess. Their camaraderie and adventurousness is established early on in a few scenes of blunt exposition in which the group sits around a fire in a woodland cabin laughing and drinking before the following morning's trip; this joviality is intended to sharply contrast the progressive brutality the film slowly mounts. But it's early on when the group is simply traversing through the dark caves that the film accumulates its humble uneasiness, with the sense of audience expectation and dramatic irony at its most vivid. Marshall exploits to great effect the tight, cylindrical spaces and the pitch dark of the caves, letting a black screen be suddenly flooded with one light source as a figure emerges from a tiny hole in the back corner of the frame. If a criterion for solid horror is the ability to tap into an audience's collective anxieties, The Descent is as pure a success as can be in these moments, extracting no-frills terror from the universal human fear of claustrophobia and darkness in a way that's not shallow or easy. It takes its time, and with the exception of one laughable entrance of hibernating CGI bats, it uses its time well.

That the film's most destabilizing moment - which induced beads of sweat down my forehead - involves the simple set-up of a woman and the elements around her (rock, dirt) says a great deal about how effectively The Descent works before introducing the fantastical elements. Sarah is shimmying on her back through a narrow channel created by a cluster of boulders. Of course, she, being the main character and psychological model of the narrative, is the last of the group to traverse the ridiculously thin passageway, and, given the recent loss of her husband and daughter (which is the subject of the film's first ten minutes), her battered emotional state does little to assist her physical agility. And of course, this being a horror movie with a forward-moving narrative for which a relative suspension of disbelief must be nurtured (I hope I'm succeeding in illuminating the film's full-fledged engagement with, and occasional subversion of, typical genre trappings), the repeated movement of the group of women agitates the surrounding rock formation, causing a prolonged moment of potential collapse in which Sarah, bereft of personal motivation in this time of psychological turmoil, must be swiveled out by her friend Beth. As Marshall frames her, the whole affair comes to resemble birth. The underground space is reminiscent of the female anatomy, with the birth canal guiding Sarah slowly and questionably into the deeper recesses of the cave. If the initial shock teases thrown at the women were just warnings before the real dangerous terrain was entered, this scene exemplifies a birth into the hell of the underground. The rest of the film, at least ontologically, rests on the question of whether or not the women, or more precisely, Sarah, will be reborn in some capacity, or if they will wither away. 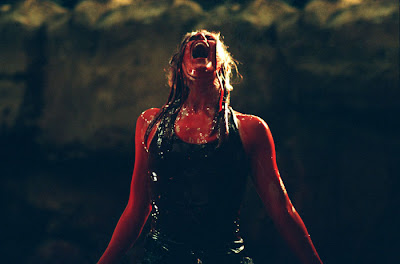 Giving the film the thrust of this subtle visual birth metaphor is a nice touch on Marshall's part, and it might be even more rewarding had he searched for trickier ways to comment on this guiding motif. But it quickly appears that cerebral complexity is not of interest to Marshall; he'd rather batter the viewer head-on with convincing subhuman creatures, the kind of monstrous things we learn have been adapting and evolving for generations until they have harnessed the ability to survive underground, feeding periodically off the animals above ground. It's a rather ingenious monster profile, stirring up eerie hypothetical inquiries about the nature of evolution and the boundaries of human transformation over time, but once again Marshall cares less about the ideas behind his creations than he does about the sheer potency of them. The relentless second half of The Descent is all blood, violence, and peril and no contemplation. It's no surprise that the offhand character drama that ensues within all this frantic women vs. monster mayhem - Sarah learns that Juno, who accidentally kills Beth when suspecting her to be a creature in the dark, slept with her husband - feels underdeveloped and negligible. More successfully, the film's about the brutal first-hand emotions of the grisly situation, the shuffling between paranoia, desperation, and forced heroism. Broader character conflicts simply come across as wanton and by-the-numbers.

Marshall half-resolves the lingering birth metaphor when Sarah, bloodied and mutilated, triumphantly breaks through the ground after surviving an intimidating series of encounters with cave creatures. This particular image, bathed in the sensationalized light of day, is even more iconic and memorable than the first one, and proves itself to be of unexpected resonance. She sprints out of the woods only for Marshall to pull a fast one and reveal her still within the depths of the cave consumed by reverberating monster noises, and it suggests, quite obviously, that she has simply dreamt up an escape. But since Marshall stages the final shot with the ghost of Sarah's daughter in seeming harmony with her mother (albeit within the cave), this notion of "escape" is deliberately allusive. Has Sarah transcended to a higher realm of peace, surrounded by her family members? And if so, does this constitute a rebirth or a death? The Descent's sudden assault of philosophical propositions is a welcome change of pace after all of the taut, brainless action set pieces up until this point, and they are in some ways invested with greater visceral power in the context of what precedes them. At any rate, the thematic power here is not particularly lasting; it's more like a thrilling rolling coaster ride that is amazing while it lasts, and recalled only in fragmented bits after. In the scope of its modest ambitions, The Descent is an undoubted triumph, but I can't help but wonder how it might have fared with a different approach, if it had taken further advantage of the "horror before the horror".
Posted by Carson Lund at 5:45 PM

I don't scare easily, but I awarded this film the #4 slot on my list of the Scariest Films of All Time (as opposed to Most Disturbing Films of All Time, quite a different list). You're right about the claustrophobia; I was sweating profusely. I'm glad you saw the U.K. version; the U.S. version wrecked the ending by implying the lead character really escaped. The sequel, as you'd expect, is pretty lame (with horrible characters), though worth seeing once, perhaps, for claustrophobia as suffocating as in the first film.

I like the points you make about birth, rebirth and inner canals. I think you describe the initial horrors very well as "no frills". That's the way it felt, simple and organic.

You pose too a great (and ultimately unanswerable) question: What would it be like without the 'supernatural'. I've wondered that myself and, though I tend to think it would be better, I can't be sure.

I was surprised and honoured to be mentioned here, Carson. Thanks.

Loren, I heard about that U.S version and wondered if it's really any worse for it's implication of escape. As I said, the U.K version has boundless "escape" metaphors, and to me they each seem potentially more uplifting than the idea of Sarah actually escaping in a material sense. Say she had escaped (and I think the film leaves that possibility open too - it could be the cave that's the dream), she is still left to live a life of despair, loneliness, and trauma, having lost her best friends, her husband, and her daughter. I assume the sequel posits her as a recovered woman, ready to go back into the caves to investigate what happened to her, but as far as I'm concerned, that film doesn't exist.

(P.S. I'll be checking out your lists soon.)

Stephen, you're welcome for the mention. Thank you for providing such an interesting concept.

I should make it clear though that I do love the U.K ending the way it is, and doubt anything else could be superior. I'm just challenging what's really a "happier" ending.