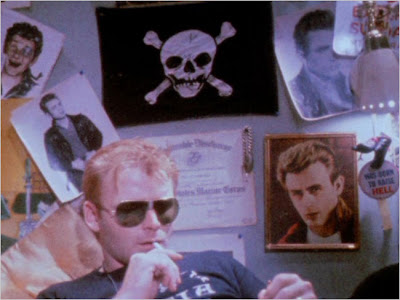 The great, mysterious, and unexpectedly funny counter-cultural hero Kenneth Anger made a special appearance at the Harvard Film Archive a week ago to show a selection of his films from very early on in his career to his latest digital work and to answer the questions of a fanatical audience. I was only able to attend one night, in which some of his most widely known experimental shorts were screening, and I was enormously impressed by the turnout. I've never seen the Archive sell out (they actually had to turn guests away at the entrance when the place had filled up, and I was the final one granted a ticket), and I've especially never seen such a mad, starstruck audience. Normally, cinema crowds are reserved and distanced, but here it was as if a generation of fanboys and fangirls were trying and failing to restrain their giddy idolatry. The result was a theater experience with a sense of communitarian spirit and aliveness that I haven't been apart of in a while, maybe not since witnessing the dreadful Rocky Horror Picture Show cult. Why exactly does Anger, an esoteric leftist, open homosexual, and practitioner of the marginal Thelema religion, inspire such a furor when compared to other experimental film artists? Why not Michael Snow, Bruce Conner (who passed away two years ago), Su Friedrich, or Chantal Akerman? I think a lot of it has to do with the propensity for Anger's films to be considered "trip movies", or works that can pass as pure visual entertainment without necessitating intellectual engagement. These are very approachable films; they straddle so many ideas but do so in a way that invites comfort, a peripheral familiarity with the world as it's depicted.

That sense of comfort is never more pronounced than in Scorpio Rising, his seminal 28 minute short from 1964, and among the closest things to an avant-garde "hit" there has ever been (maybe Warhol's Chelsea Girls is also in contention). The film consciously reflects pop culture through the prism of its own progressive bizarreness, incorporating a deliciously sardonic soundtrack of 60's pop music (Elvis, Bobby Vinton, Ray Charles) and images of national star figures (James Dean). Mirroring this is the self-consciousness with which his central cast of characters - a leather-clad biker gang - go about their preparatory biking routines, suggesting the film is to some extent a comment on image-centric America, where people are swallowed up by images, living either victim to them or in embrace of them. The first section is an in-depth exploration of the gang leader's rituals leading up to the climactic race scene. He's the titular figure, marked by tattoos of his nickname "Scorpio", which adds a take-it-or-leave-it element of astrology to the film. Anger's elegant, roving camera fetishizes his subject, who is in turn fetishizing his own routines of buffering his bike, fixing the engine, decorating himself with his leather jacket and tight jeans, and snorting cocaine. The music comments obliquely on the action onscreen - implicating the bikes as pretty toys with Peggy March's "Wind-Up Doll, or adding an ironic layer of romanticism to the material worship with Bobby Vinton's "Blue Velvet" - but more fundamentally it contributes another texture to the film's steadily mounted mass culture sheen, which coexists side-by-side with the sharp elements of underground, marginal society, such as motorcycle racing, homosexuality, and Nazism. It's as if to suggest there's no high and low, no popular and marginal, that these cultural distinctions are ultimately negligible.

At any rate, these seemingly disparate subtexts collide in a jarring fashion in Scorpio Rising, which features some of Anger's most aggressively associative, Eisenstinian editing. The outburst does not come however until the ending of the film, or perhaps more to the point is to say that the editing gradually accumulates speed and density as it moves forward. It often feels like Anger is building up to some grand narrative explosion, but, in spite of the visceral nature of the imagery, the effect is strictly thematic. As the bike race grows in intensity and danger, found footage (and Anger really puts the "found" in found footage, having literally stumbled upon one of the videotapes he dissects) of Biblical pilgrimages and Nazi rallies caustically intrudes on the linear flow, reminding us that leaders, like the film's protagonist, can manipulate their powerful grasp on people for both merciful and evil purposes. The lingering question, of course, as to whether Scorpio falls into the former category or the latter, is left up to the viewer who must call upon his/her own experiences in assigning meaning to the film's rich associative puzzle. Whatever the conclusion though, Anger doesn't have an influence one way or another; his gaze is deeply respectful, even glorifying, as if he's trying to incorporate himself into the gang and really understand their eccentric ways of life. Or are they really eccentric at all? Somewhere within Scorpio Rising's sprawling tapestry of visual and sonic chaos, you'll discover that such judgments are beside the point. 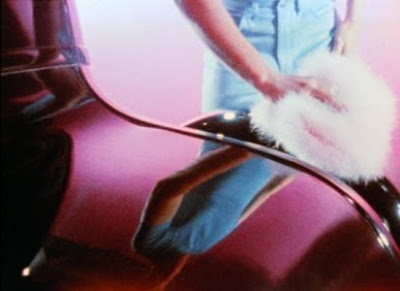 The second film shown was Kustom Kar Kommandos (1965), a six-minute fragment of an unfinished longer work that feels like an abbreviated parody of Scorpio Rising in that it maintains focus on the culture of motor vehicle infatuation and does so with a somewhat ironic detachment. Only here, one gets the sense that the ironic detachment is the sole purpose, making it a less complex, if no less entertaining, work than Scorpio Rising. In this case, Anger trumpets the west coast hot rod lifestyle, floating over a man tending to his ridiculously souped-up, hot pink car. Eroticized images of the muscular, scantily-clad owner and the voluptuous contours of his vehicle humorously discover sexuality in both man and machine, keenly perceptive to how the obsessions of the former influence the designs of the latter. Once again utilizing pop music (The Paris Sisters' "Dream Lover") to energize and comment on the behaviors, the short particularly feels like an influence on kitschy modern-day advertisements, like the kind of all-too-common car commercials that detect this very same intimacy between owner and product. For this, Kustom Kar Kommandos is nowhere near as charming as it might have been when first released, but it remains a funny, pictorially sensuous tidbit nonetheless. 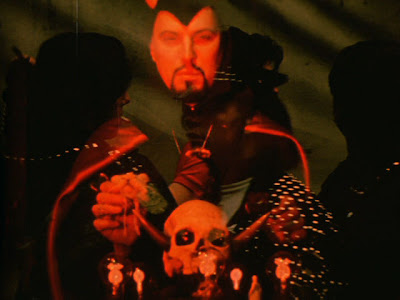 Invocation of My Demon Brother (1969), the most unsettling and hallucinatory of the bunch, takes Scorpio Rising's peripheral fixations on death to a greater level of intensity, claiming various iterations of a skull as its central motif. Grotesquely lit faces, disembodied, floating skulls, and, in one instance, a skull-shaped pipe all figure into the film's densely packed visual assault, which is supposedly Anger's genuine attempt to conjure the spirit of Lucifer (the God of Light) and his demon-brother. Whatever the spiritual ambitions of the project, it pays off marvelously, because the trance-like state induced by the film feels at least hypnotic, if not otherworldly. It suffices as simple visual poetry, as the barrage of icons, symbols, occult rituals, and ghastly superimpositions - though designed in the interest of Thelema associations - tend to satisfy as pure plays of light, color, and texture, like in the work of Stan Brakhage. Regardless, most of these images cast a shocking and in some cases lasting spell, such as the repetitious use of the same man's face in close-up with a fury of ghostly symbols dancing around his eyes, or the unexpected diversion of a group of naked man sitting together in the dark, illuminated only by Anger's lurid splashes of red light. This is all facilitated by Mick Jagger's shrill but ultimately fitting electronic score, which incessantly beeps and moans behind Anger's images and dictates the pace of the editing. Whether the staggered inclusion of live Rolling Stones footage is intended as a mere thank you to the band's frontman or a necessary ingredient in the film's puzzling content is never clear (although the latter is likely given Anger's supreme high-mindedness), but it chalks on another layer of mystery to this bizarre, portentous work. 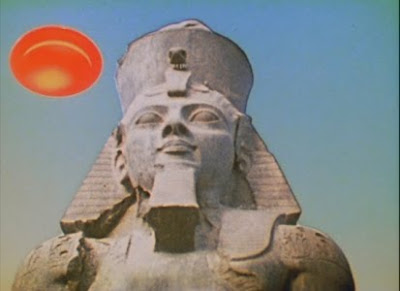 Anger's desire to evoke spirituality with his work is manifested most bluntly in Lucifer Rising (1972), the last film screened at the Archive and presumably another riff on the myth of Lucifer, this time fraught with various other Gods as if to imply a kind of universality. Unlike Invocation of my Demon Brother and his earlier Inauguration of the Pleasure Dome, Lucifer Rising is much tamer with its imagery in approximating the transcendence Anger is reaching for, using traditional long takes, pans, tilts, and an arcane sense of narrative rather than creating abstractions. As a result, it's often conspicuously self-important, reducible as it is to a series of long, hypnotic trudges by Anger regulars clad in baroque outfits through spaces both natural (ancient Egyptian pyramids and the surrounding desert) and indefinite (dark, shadowy hallways). Surprisingly, what has become one of Anger's defining images - that of a UFO soaring uncannily over a massive Egyptian statue - has also proven to be one of his most dated, an unsatisfying display of special effects wizardry that momentarily removes the seriousness from the film when Bobby Beausoleil's cloying, epic score isn't already doing so. While Lucifer Rising is certainly not without its pleasurable curiosities - the protracted slow-motion shot of lava spouting from a volcano that begins the film, a creepy moment of ritualistic gore - it ultimately feels like an overlong example of Anger indulging without restriction in his scattered mythical and mystical obsessions. As far as I'm concerned, it wasn't an ideal way to conclude the screenings, but it nonetheless lead the way to Anger's own fascinating insights and anecdotes regarding the films. All in all, an illuminating evening courtesy of a film artist quite unlike any other.
Posted by Carson Lund at 12:03 PM