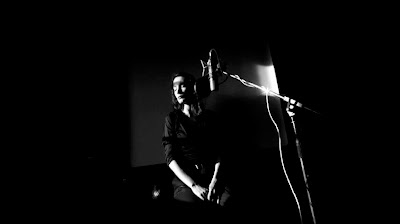 (This review is referring to a screening at the Harvard Film Archive after which Costa himself spoke.)

They say great artists don't know how to talk about their work. Or so the cliché goes. Pedro Costa reinvigorates this understanding; not only does he ponderously ramble on about matters somewhat tangential to those inquired about (which must partially be attributed to the language barrier), but in many instances he seems to present notions that contradict or complicate the ostensible motivations and ideologies present onscreen. When Costa half-jokes about a universal distaste for documentaries, one gets the sense that he's referring to a didactic, dry form that he does not concern himself with. That much is clear. However, this offhand comment comes moments before an extended monologue about what he perceives to be a widespread disillusionment with the pleasures of fictional world-building, a lack of ability for contemporary audiences to invest in narratives with the same sense of wonderment and awe that cinema-goers did in the early 1900's. All of this is curious when placed in context of the film in question, his latest venture into the vast gray area between narrative and documentary, Ne Change Rien. Nine out of ten viewers unaware of the exacting cinematic practice of Pedro Costa would call this a documentary, perhaps even an insipid, perplexing one at that, and that same sample would likely agree that Costa had no intentions of creating a skewed kind of "vampire story". This pro-fiction babble is destabilizing coming from a director whose very films seem disillusioned by narratives, fixated as they are on worlds where all stories seem to have evaporated and there is little more to do than tirelessly investigate the strange tendencies of surfaces and people.

But to temporarily decipher Costa's charming hypocrisies, it's at least important to realize that he transforms what is superficially a music documentary into something else entirely, an utterly distinct piece of pure cinema that has a tendency to oppose everything a standard film about music would do. Its central aim is Parisian actress Jeanne Balibar - whose secondary musical career Costa turns his camera towards here - as she alternates between rehearsals with her eponymous trance/lounge/pop group in their preparation for an LP and her work as a singer for a theater production of Jacques Offenbach’s La Périchole. The particulars of this documentation (song titles, names of fellow performers, even the name of the stage production she's involved in) are left unclear in the film, meaning it's certainly not fulfilling as a traditional documentary whose primary goal is to enlighten and inform viewers. It's closer to a film like Ossos, seemingly his most fictionalized Lisbon portrait, where details are scattered and obscured in an attempt to facilitate an enigmatic story delivery. Because Costa creates a longing for details within the viewer through his deliberately incomplete or unexplored segments, a tension is established not entirely unlike that in a narrative film.

Usually this tension is made explicit in the fragmented presentation of individual scenes, where Costa lets his camera linger on a static frame of one performer, or in some extreme cases, just the neck of a guitar in the shadows, while the rest of the music occurs offscreen in an imagined space. If one of the chief concerns of a music doc is to capture the collaborative magic of music-making, Costa subverts it by refusing to show the band in mutual engagement. Yet at the same time, his employment of a mono soundtrack (he only used one microphone, usually beside the camera) is an attempt to harness a greater sense of togetherness. Here the tension between the visual separation and the sonic singularity makes for an odd and disconcerting hybrid, confusing the viewer but also encouraging imagination. What's more, it approximates the phenomenon of multitrack recording, where performers are literally disconnected in a studio but joined in the headphone output. In one revealing scene, Costa shows a sound-blocked booth where Balibar is singing, and it is only when he cuts away to the musicians in the adjacent room that we realize an entire song is being played, as Balibar's intimate, mellow singing gives way to a fuller, more manufactured group sound. Moments like these potently convey the manipulation of the studio recording craft and feel like uncomfortable invasions of privacy. 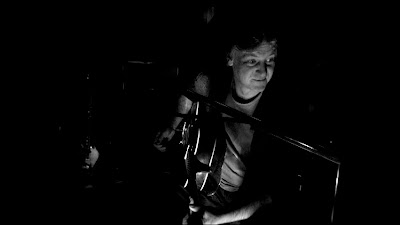 If the film tails off about halfway through and never fully recovers, it's because its main subject is essentially uninteresting. I realize that this may be a minority viewpoint and that several people have expressed great enthusiasm for Balibar's artistry. I also realize that her unflinching stoicism is deeply in line with the rest of Costa's work, in which figures exists like shadows in an otherwise concrete world. But her enormous ambivalence and, quite frankly, lack of sufficient musical talent became rather off-putting at a certain point. It's as if the music doesn't grow organically from her, like she's endlessly going through the motions, existing in this space and only happening to toss off some utterances under her breath so as to not look like a complete maverick of indifference. This seeming vacancy of mind is evident in one of the film's most trying scenes, when Costa sets his camera down in one never-ending two shot of Balibar and Rodolphe Burger (the guitarist) as they dissect a pulsing bass sample from Curtis Mayfield’s “Super Fly”. Balibar is mechanically repeating the same vocal melody and her lethargic knee-tapping periodically falls out of time. Surely, it doesn't take much to simply follow a beat or search for some variation in phrasing, and I think Balibar's inability to convincingly do so in this scene suggests a fundamental remoteness, a lack of connection with her music. If it's any measure of credibility, I should make it clear that I have had extensive experience as a musician, rehearsing and recording, and it's something I find consistently exhilarating, making Balibar's indifference that much more irritating.

Unfortunately, this is to the detriment of Costa's own rigorous approach. His unrelenting static compositions provide ample time for Balibar to reveal her inner spark, but she remains remote even as her face, made gigantic with Costa's claustrophobic framing, looms over the theater for several minutes. As a study of a person, it's transfixing stuff, but as a study of a performer and performance, only variably does it offer excitement, immediacy, or insight. Balibar aside, the atmosphere in Ne Change Rien is unprecedented; a feeling of late-night melancholy and introspection pervades the film even during its daytime studio performances, when ethereal light sprays in from the few windows, teaming with domestic lamps as the only sources of illumination in the otherwise black, cavernous space. This moody setting is likely what contributes to Costa's vague description of his film as a "vampire movie where the characters play instruments", and it perhaps speaks to the kind of world-building he advocates for. It's a place you get lost in for however long the film runs, and you lose your conception of time. I wasn't watching Ne Change Rien as much as I was living it.
Posted by Carson Lund at 8:55 PM