The Watermelon Man (1970) A Film by Melvin Van Peebles

Melvin Van Peebles' The Watermelon Man, or, When Brechtian Cinema Goes Bad, is a demented domestic parable that plays like a left-wing sitcom stretched to feature length. Its premise - that of an outspoken bigot whose skin turns black overnight - echoes the simple-minded modern-day comedies of Tyler Perry. These are films that operate under the banal understanding that in order to confront societal inequities one must face them head-on with silly, speculative plots that draw glaring attention to human differences. As a result, they do less to alleviate unfair prejudices than they do to reinforce them, getting across only the vague notion that "things must change" rather than offering up any suggestions or providing any insight into the complexity of such a topic. The Watermelon Man's leading concern is the segregation of Negroes in American society, particularly among the bourgeois white population, so it confronts this situation in the bluntest, most obvious manner: it converts a member from the latter majority to the former minority to give him a taste of the other side, to "teach him a lesson". It's a shame that for its distanced social critique and conscious aesthetic of irritation this falls under the umbrella of Brechtian cinema, otherwise a socially and politically productive form, because Van Peebles only recycles the already prevailing climate of prejudice in late sixties American suburbia with the pedestrian suggestion that it's wrong.

In order to cushion his critique in a polarizing black or white dynamic (literally), Van Peebles villanizes the white folk, lifting the guise of economic prosperity to reveal scheming, heartless individuals beneath. Late in the film, main character Jeff Gerber (Godfrey Cambridge) is confronted by a group of white neighbors who offer him $40,000, then $50,000, then eventually $100,000 to move out for fear that his presence will sabotage the morale of the neighborhood. To remove this supposed parasite from their meticulously contained lives, no price is too high. Elsewhere, this caricature of a white predator is no less pronounced: hordes of townsfolk crowd around Gerber insisting he's a thief with no visible evidence, a white women sleeps with him on the basis of his exotic blackness, and worst, his own wife loses faith in him at the expense of their love and mutual need for each other. All of these scenarios offer variations on the typical manifestations of white supremacy, each over-the-top and unconvincing in their own right. What's more, Van Peebles posits Gerber's transformation as a process of self-actualization. Though Gerber first interprets his black skin as a punishing comeuppance for his rude, unfiltered behavior in the beginning, his blackness eventually resolves itself as a return to a superior moral primitivism, a notion Van Peebles suggests is only alive among the African American race. It's as if the film is governed by the idea that Negroes must teach the white majority to rethink their values, that otherwise the white majority as a whole is doomed to rot in moral and spiritual decay. Sure, some of Van Peebles' observations are correct and worthy of consideration, but not on the kind of cosmic level he employs to launch his indictment. 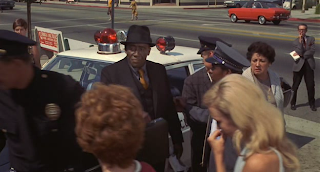 Before going further, it's important to acknowledge that The Watermelon Man is decidedly not after understatement. It wants to attack loudly, and it doesn't take any measures to disguise it. One might uphold that social problems such as that of racism in 60's and 70's America can only float to the surface of the collective conscience through broad, angry gestures, and to that I tenuously agree. But if this means simplifying social structures so extremely that they cease to feel practical in context of the real world, I think that's a failure that invites hyperbole and caricature rather than measured considerations. Van Peebles is direct and unsubtle in his drawing attention to the negligible values that are assigned to color in society by sporadically adorning the screen with arbitrary filters (red, green, blue, yellow), for seemingly no other motivation than to reinforce what little bearing it has on the narrative, and by extension, on people, or perhaps also to send another shatter through the already dilapidated fourth wall. When Gerber first wakes up black, this device is employed to absurd extent. Staring at a mirror (or more to the point, a glass wall), he shrieks and wimpers while Van Peebles cuts back again and again to his initial outburst of shock, blasted through a gyrating color wheel. Gerber's rubbing his nose on the cinema screen itself, literally prying at the audience to understand his "predicament". In the process, Van Peebles is screaming at the audience with a combination of his disjunctive editing, his overpowering atonal score, and the sheer absurdity of the spectacle.

At a certain point, The Watermelon Man accomplishes a lulling, inoffensive state of redundancy and overstatement. Its points - or in this case, its absolutes - have been sledgehammered home, so the only remaining diversion is to watch this allegorical instrument pass through a deterministic trajectory from impish asshole to moralizing beast of burden, which all culminates in Van Peebles' grotesque money shot of a shirtless Gerber posed in freeze-frame with a spear in a self-defense class. Despite its jolting stylistic qualities, which are ostensibly at one with grand statements, this kind of cinema paradoxically works best when it's not pinned down to a single strand of criticism, when it offers up a slew of fascinating social issues and finds abstract, associative patterns within them. Take Godard's Two or Three Things I Know About Her, a film Van Peebles could have learned a thing or two from, which mines the new, unsettling parallels between modernization, consumerism, and prostitution in 60's France through a similarly in-your-face aesthetic. The Watermelon Man is not thoughtful cinema but rather trite sloganeering, no matter the good, egalitarian intentions at its core.
Posted by Carson Lund at 12:05 PM